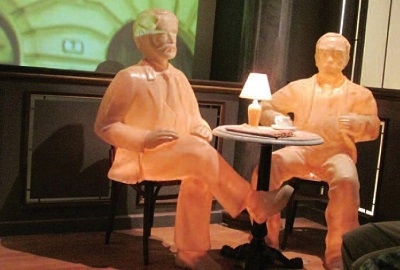 Learning about Herzl's early life with “guests” from his era. Story and photos by Yael Meyer

On a lovely day in April, a busload of ESRA day-trippers travelled to Jerusalem to visit two incredible museums that bridge the founding stories of the State of Israel.

I hadn't visited Yad Vashem for over 20 years and I wasn't sure what to expect. I had heard that there was a new museum, but I never imagined the massive change that Yad Vashem had undergone in the interim. The grounds of the Yad Vashem memorial still contain the Children's Memorial, the Hall of Remembrance, the Museum of Holocaust Art, sculptures, outdoor commemorative sites such as the Valley of the Communities, a synagogue, a research institute, and an educational center: the International School/Institute for Holocaust Studies. But the gem of the memorial is the Holocaust History Museum. 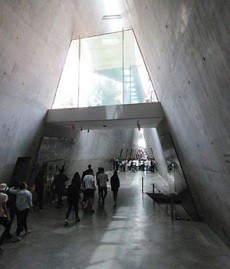 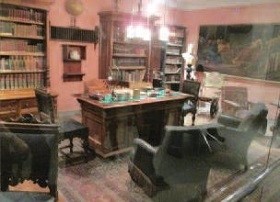 Upon entering the memorial grounds, one proceeds to a reception center and then to the Holocaust History Museum, which opened to the public in 2005. Designed by Canadian-Israeli architect Moshe Safdie, the museum consists of a long corridor connected to exhibition halls, each dedicated to a different chapter of the Holocaust. It combines the personal stories of 90 Holocaust victims and survivors, and presents approximately 2,500 personal items including artwork and letters donated by survivors and others. Bringing the story to a personal level that can be more easily absorbed by the visitor, the museum focuses on the individual stories of Jews killed in the Holocaust. According to Avner Shalev, the museum's curator and chairman, a visit to the new museum revolves around "looking into the eyes of the individuals. There weren't six million victims; there were six million individual murders."

The brilliant design of the museum lends to the experience of entering a tunnel, which eventually leads to the experience of freedom via an expansive view of Jerusalem and its surrounding hills. The building is shaped like a triangular concrete prism that cuts through the landscape, illuminated by a 180 meters long skylight. Visitors follow a preset route that takes them through underground galleries which branch off from the main hall.

Our knowledgeable guides took us through the museum in a couple of hours, but one could – and should – devote an entire day to the museum and the surrounding grounds and other exhibitions of the memorial.

After lunch, we boarded our bus to go on to the Herzl Museum located on the grounds of the Mt. Herzl Memorial Cemetery. This visit was a welcome counterbalance to the emotionally draining experience which immersion in the horrors of the Holocaust at Yad Vashem had evoked.

The Herzl Museum deals with the activities and vision of Theodor Herzl. The refurbished museum includes exhibits on Herzl's life, including a reproduction of his study in Vienna. The concept of the museum is to take the visitor on a learning journey explaining the development of the Zionist advocate whom Herzl became via audiovisual experiences and life-sized "realistic" exhibit halls. The overall theme of the journey is the fictional story of a young man who is due to play Herzl on stage being schooled by the director and an academic expert on Zionism, on the life of Herzl, what he was like as a man and the role he played in the founding of Israel.

In the first room, the visitor sits on a stool in a 19th century European town square as a three-wall video shows Herzl's early life. In the second, one "enters" the World Zionist Conference at Basel via seating in a conference hall, surrounded by "other conference participants" (sculpture figures) and yet another video depicting the conference. The third room is Herzl's office, transported and set up as it was when he died, and lastly, the visitor enters a theater where the final speech of the actor is shown, reviewing Israeli history to the modern state, fulfilling the vision of Herzl.

With more time, one should actually enter the cemetery where one can visit the grave of Herzl and other national leaders of the State of Israel.