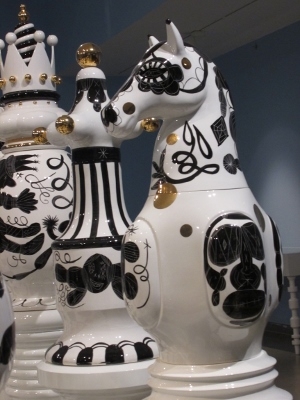 Checkmate ... parts of a chess set. Story and photos by Yael Meyer

On a chilly, but mostly sunny January day, a busload of ESRA day-trippers travelled to two locations in the center of the country to visit the best of modern Israel.

Our first stop was at the Design Museum in Holon. Arriving at the museum, one is immediately struck by the building's unique architectural structure. The building was built as part of an effort by Holon's Mayor and City Manager to transform Holon into an outstanding cultural and educational center.

The museum joins an exceptional hub of cultural facilities, including a library, a theater, a cinematheque, the Holon Institute of Technology and the National Israeli Cartoon Museum. 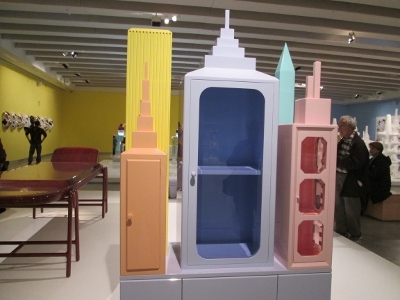 The museum's distinctive structure was designed by the internationally renowned architectural firm of Ron Arad Associates and is constructed in a unique steel ribbon facade. The sculptural external envelope is made of steel (Corten) bands, which change color as a result of exposure to the sun and the weather. These steel bands enclose the building and its winding internal walkways. 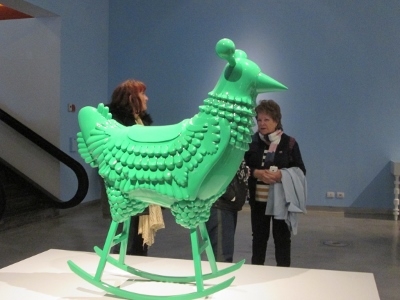 The museum includes two galleries for temporary exhibitions, a design lab and an education workroom, which hosts schoolchildren to introduce them to the world of design.

The main exhibit being shown during our visit was "Funtastico" by internationally-acclaimed Spanish designer Jaime Hayon. His work is driven by the urge to create his own special world where amusing and fantastic elements are combined with a focus on detail and finishing. 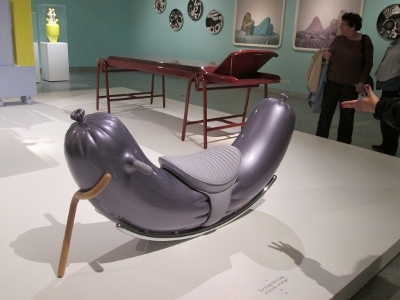 The exhibition presents the range of Hayon's work over the past ten years, including an installation of ceramic cactuses and birds, complex intricate paintings and drawings, functional chairs, amusing spoofs of Americana (a rocking hotdog chair, baseball designs, a sculpture of New York in Miami colors), intricate glass pieces made in conjunction with the French glasswork firm of Baccarat, and a full-sized ceramic chess set, among many other astonishing artworks displayed on the museum's two gallery floors.

A secondary, smaller exhibit was devoted to the work of local designers in the Nature of Materials (NOM) project. Their end product is a set of stackable chairs made by bending metal. 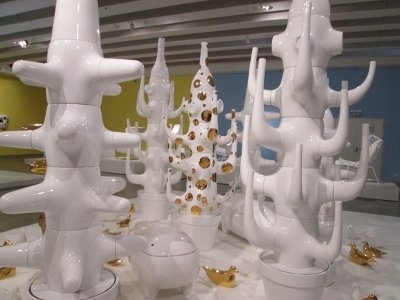 Items in a cactus garden

The exhibit displays all stages of the design process of the chairs from paper models, through partially finished products to the completed chairs. In the room there is also an interesting display of children's interpretations of the models.

After a lunch break we boarded our bus to travel to Rishon Lezion, which is the site of the Visitors' Center and Shafdan Plant of Igudan – the center for wastewater treatment and recycling for some 23 local authorities in the Dan Metropolitan area.

You would think that treatment of sewage would be a boring topic and a tour of the facility would be a stinky, disgusting activity. Far from it! We had an amazing, fluent, knowledgeable guide and the two hours of lectures, films and touring flew by.

People come from all over the world to learn from Israel, which we can be proud to say is the leading country worldwide in recycling wastewater.

We recycle 85% of the country's wastewater; whereas the next closest country to us is Singapore with only 35% recycling. Some interesting trivia we learned was that wet-wipes are the worst offender in terms of non-degradability and potential for causing disastrous clogs in the sewage pipes.

Contrary to the labeling on the products, they take more than a year to degrade; whereas ordinary toilet paper degrades in a single day. People throw things like hair (bad idea) and even cell phones down the drain.

Technically, shower water is collected into a drain and disappears down the pipes, as does water flowing down the kitchen sink, the toilet, the dishwasher and the washing machine. It flows into the sewer system from smaller pipes in the cities to massive regional pipes and eventually to the Shafdan plant.

At the plant, the water flows through various treatment stages that take about one year to complete. The Shafdan plant is the only plant in the country completing wastewater treatment to a tertiary level (theoretically cleaning the water to a drinkable level, although it's not used for that purpose).

All the other plants in the country only treat to a secondary level – good enough for agricultural use.

Biological reactors at the Shafdan plant

We then descended to a lower level of the building where we had the opportunity to walk through a huge model sewer pipe; after which we could view bacteria through microscopes and see a model providing an overview of the entire plant.

Lastly before proceeding outdoors, we saw a movie outlining the entire treatment process.

On the outdoors part of our tour, we saw (and smelled – not terrible) the actual treatment facilities.

The wastewater goes through the following stages: preliminary treatment, primary clarifiers, biological reactors, secondary clarifiers (where the clarified water is separated from the sludge before going forward to tertiary treatment), sludge thickening facility, N-Viro facility, anaerobic digesters, centrifuge dewatering facility and finally the sludge loading facility gets the solid material to be used as fertilizer.

At the end of an entertaining and educational day, we were all smarter and impressed with the level of sophistication that we enjoy in both cultural and environmental facilities and institutions here in Israel.