Walking in the Valley of Ela 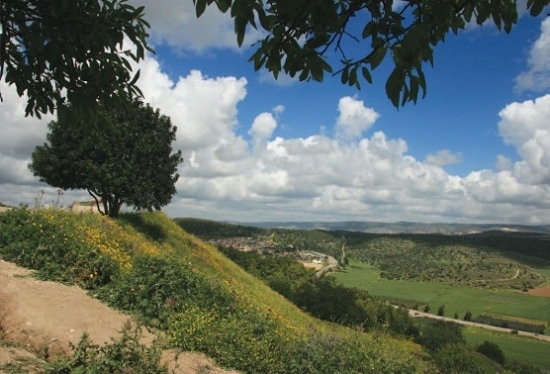 The view of the Ela Valley from the top of Tel Azela. Story and photos by Yael Meyer

One wintery, rainy day in March an intrepid group of ESRA day-trippers dodged the raindrops to tour the Ela Valley, site of the biblical battle between David and Goliath, and more. During the worst of the rain we were lucky enough to be on the bus between sites.

Our first stop was at a senior day center at Nehorai in the Lachish region, where we toured the facility and had an opportunity to speak with some of the seniors who had immigrated to Israel from all over the world. The center has many different activity areas, including arts and crafts studios, a café, gardening nursery, television viewing area, lunch room, and more.

The courtyard of the Nehorai Senior Center. 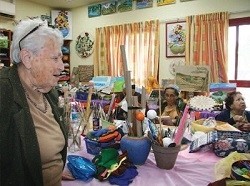 In the activity room at the Nehorai Senior Center.

Our guide, Beryl Ratzer, introduced us to the building up of the area by immigrants – mostly from Arab countries – who were housed in ma'abarot(tent cities thrown up in the years after the War of Independence when resources for housing were extremely limited). Beryl also told us to the story of Rivka and Mordechai Guber, who were leaders in the development of the area.

Rivka Guber grew up as part of a family of Jewish farmers in the Ukraine. She married Mordechai Guber, and they immigrated to Mandatory Palestine in 1925. The couple settled in Rehovot, where Mordechai taught Hebrew. They were among the founders of KfarBilu, later leaving to join Kfar Warburg, where they raised their two sons, Ephraim and Zvi. During World War II Rivka served in the British Army. Ephraim and Zvi were killed in the War of Independence and a moshav in the region,Kfar Achim, was named in their memory. Later, Rivka worked as an educator and social worker, but she dedicated all her energy to immigrant absorption and to the education of new immigrants in the ma'abarot. 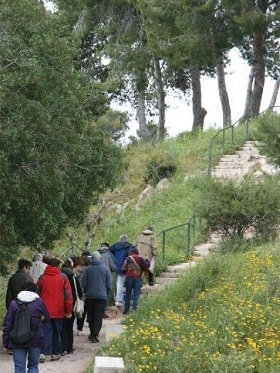 Starting the walk up Tel Azela in the Ela Valley

The highlight of this stop was getting to hear the history of the area through the story of one of the original settlers. Avraham, originally from Tunisia, entertained us with the fascinating story of his arrival in Israel as a very young child. After arriving by boat at the port of Haifa, his family and others were loaded into trucks to complete the journey to their new homes. They were only told that they were going to "Lachish 2" but had no idea where that was. They asked their driver, who was almost as much of a newcomer as they were, and he told them it was "somewhere near Acco". "Good," they thought,as they had relatives in that area, but little did they know that they were to travel in the opposite direction! Hours passed, and they kept asking the driver when they would get "there". Having only minimal Hebrew in common, the driver repeatedly said: "Savlanut" (patience) and "odme'at" (soon) – not a chance! As Shabbat approached they arrived in the middle of a field full of shrubs and thistles, with only an empty shack, inadequate to house them all, to greet them. Somehow, in spite of jackals howling at night and a driver who disappeared, they managed to survive until another truck came to their rescue on Sunday. The area is now totally different from when Avraham arrived; it is completely settled with towns, villages, agriculture and all the appearances of modern life.

Next we traveled to the heart of the Ela Valley to visit the site of the biblical battle between David and Goliath. We stopped to view Tel Lachish, which was one of the cities in ancient Judah. Lachish was second in importance only to Jerusalem. One of the Lachish letters found at the Tel warns of the impending Babylonian destruction. It reads: "Let my Lord know that we are watching over the beacon of Lachish, according to the signals which my Lord gave, for Azekah is not seen." According to the prophet Jeremiah, Lachish and Azekah were the last two Judean cities to fall to the Babylonians before the conquest of Jerusalem.

From Tel Lachish we proceeded to Tel Azeka (located in Park Britannia), from which we could see across the valley to Tel Socho. As the story goes, the Israelites were camped on Tel Azeka with the Philistines camped on Tel Socho, and the battle took place in the valley between the two hills.

On Tel Azeka members of our party read excerpts of the biblical story (recounted in Samuel) while we overlooked the battle site. The story tells us that twice a day for 40 days, Goliath, the champion of the Philistines, challenged the Israelites to send out a champion of their own to decide the outcome in a one-on-one combat, but Saul and all the Israelites were afraid. However,David, a mere shepherd, accepted the challenge. David and Goliath confronted each other, Goliath with his armor and javelin, and David with his staff and sling. "The Philistine cursed David by his gods", but David replied: "This very day the Lord will deliver you into my hands. I will kill you and cut off your head; and I will give the carcasses of the Philistine camp to the birds of the sky and the beasts of the earth.All the earth will know that there is a God in Israel. And this whole assembly shall know that the Lord can give victory without sword or spear.For the battle is the Lord's, and He will deliver you into our hands." David hurled a stone from his sling with all his might and it hit Goliath in the center of his forehead, Goliath fell on his face to the ground. David cut off Goliath's head, and the Philistines fled. 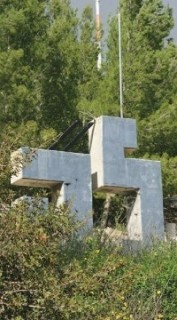 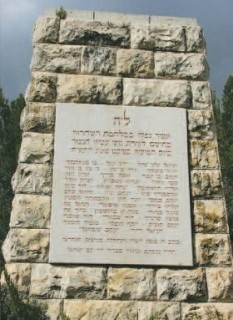 Inscription on the Lamed Hei monument.

Our final stop was at Kibbutz Netiv Ha Lamed Heh, where we returned to stories of the modern history of Israel. The kibbutz was established in 1949 by demobilized soldiers of the Palmach.It was named after the 35 Haganah soldiers killed on the site while attempting to resupply the Gush Etzion kibbutzim that were blockaded by the Egyptian army in January 1948 during the War of Independence, after earlier motorized convoys had been attacked. According to some reports many of the bodies had been mutilated, some beyond recognition.

The fallen soldiers were buried on Mount Herzl in Jerusalem after the war ended. At the memorial monument, members of our group recited Kaddish for the soldiers; a moving and fitting end to our visit. The story of the 35 was immortalized in a poem, Here Our Bodies Lie by Haim Gouri:

"… Behold, our bodies are laid in a long, long line; we do not breathe,
But the wind is now on the hills, the wind breathes,
Morning breaks, and the shining dew sings.
We shall return again, we shall meet, shall return as scarlet flowers.
You will know us at once, our silent "mountain platoon"

Then we shall blossom, when the last shot has been silenced in the hills."