May 03 Posted by Cynthia Barmor in September 2016 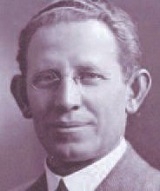 A number of us from Modiin attended the screening of the documentary, "Ochberg's Orphans" organized jointly by the ESRA Rishon branch and Telfed in July. Some of us hailed from South Africa; others not. For all of us, the evening was impressive, impactful and meaningful. Thank you Rishon.

Watching the moving documentary about this Jewish hero, Isaac Ochberg, little known outside South Africa, who dared to save the lives of Jewish orphans in 1921 after WWI, touched everyone in attendance. The end of WWI heralded horrific anti-Jewish pogroms and other atrocities in Eastern Europe which left many young Jewish children orphaned. With single-minded purpose and with the backing of Jan Smuts, who facilitated the approval of the SA authorities to accept these youngsters, Ochberg returned to the Ukraine where he was born. He went from shtetl to shtetl, hand-picking his orphans one by one, but never separating siblings. His courage, determination and dogged persistence culminated in 187 Jewish children under the age of 16 arriving on the shores of South Africa in September 1921.

The children were sent to orphanages in Cape Town and Johannesburg; only very few were subsequently adopted.

In saving 187 orphans, Isaac Ochberg nurtured future generations. His contribution to our nation can never be evaluated in numbers or dollars. His remarkable feat of compassion gave rise to the birth of thousands of Jews now spread across the globe. The late Elie Wiesel was wont to decry the senseless killing of Jewish children during the Holocaust. "These children," he said, "might have been doctors, scientists, researchers who could have contributed to humanity and the world. Humanity lost."

One Ochberg orphan is still alive and living in Israel, Cissy Harris. Now 98 years young, she was interviewed for the documentary. Her memories of her family and village (she travelled there for the movie) were poignant and painful at the same time.

The evening was given added context by Dave Kaplan, former Chair of Telfed, who was involved with the making of the documentary. He explained that Ochberg died in 1937 and in terms of the provisions of his will, the JNF (KKL) and the Hebrew University received over £250,000. This bequest was the largest that had ever been made to Palestine as it then was. The JNF used the funds to purchase a large tract of land on which the Kibbutzim Galed (officially named Evan Yitzhak after Isaac Ochberg) and Dalya were established.

ESRAmagazine #186 (June – August 2016) published an article about Ochberg and the beautiful memorial established on Kibbutz Dalya; and in a previous edition #160 (June – August 2011), "Remembering Isaac Ochberg, Benefactor, Tsadik, Father of Orphans". Both can be read on www.esramagazine.com