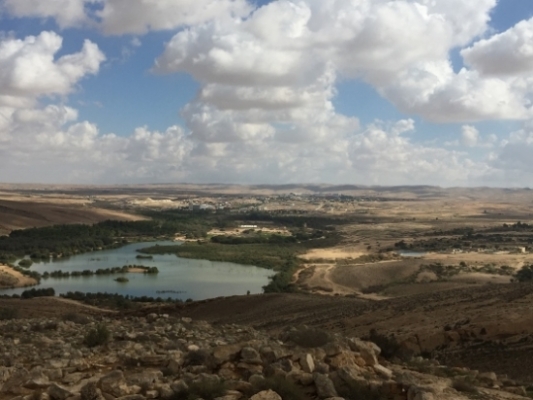 Story and photographs by Steve Kramer

The ESRA Hiking Club recently ventured south to the hills of the northern Negev for one of the most beautiful hikes that I've done in Israel. We were heading towards the Yeruham Park and Lake, where there are green groves and a man-made lake in the middle of the desert. After years of neglect, a sewage recycling plant was finally constructed on the outskirts of Yeruham by the Jewish National Fund, helping to revive the lake and make this park an unexpected pleasure.

The weather was perfect for hiking. As we progressed through the barren desert landscape, we were on the lookout for winter flowers, signs of animal life and beautiful views. Eventually we reached a viewpoint from where we could see the lake, with the desert town of Yeruham beyond it. On the far side of the town is the Great Machtesh (crater), one of the Negev's major attractions. We could just make out the location of the crater's edge. 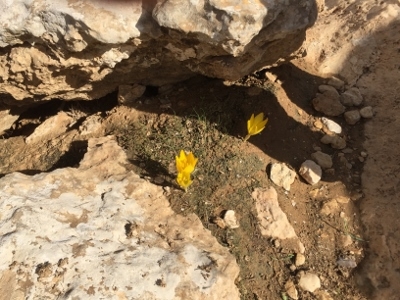 Crocuses hidden between the rocks

Yeruham is the site of Tel Rahma, dating back to the 10th century BCE. In 1951, it was founded as a development town where new immigrants from Romania, North Africa, Iran, India and other non-Western countries were placed. A sea-change for Yeruham occurred when the former mayor of Haifa, Amram Mitzna, a reserve IDF general, served a 5-year term as mayor. Since then, the town has experienced revitalization and now has a population of 10,000. It is benefiting from the general growth in the Negev, the relocation of many army bases from central Israel and its location just a half-hour's drive from Beersheba.

At this point in our hike, we circled to the right of the park, first descending and then beginning a series of long climbs up to another summit, from which we could see a second desert town, Dimona. The 360 degree panorama from the summit was fabulous. We were rewarded on the trail with viewings of nearly-hidden yellow crocuses, one of four varieties of the flower, which only grow in certain spots in the region. This particular variety is called the Helmonit crocus, deriving from the Hebrew for egg yolk. These varieties were thought to be extinct, but are now recognized as endangered.

The guide, Reuven, and hikers at the summit

We began our decline towards the park. When we reached it, Reuven pointed out the tamarisk trees which have encroached on the perimeter of the lake, similar to what one sees at Lake Kinneret. Since the lake was revived by a new sewage plant, it has become suitable for introducing fish and recreational fishing.

We returned to our bus for the ride north. Besides enjoying the exercise and the magnificent views, we had learned that the Negev is becoming something more than a large training area for the IDF. Now it is a significant factor in modern Israel, with the government, the IDF, the local communities, the JNF and the environmental NGOs driving its growth.