In my search for lesser known aspects of Israel, I visited the Italian Synagogue in Jerusalem. This turned out to be a joyous experience for me in more ways than one.

On arrival I heard music coming from two talented singers entertaining the crowds outside the synagogue with selections from Italian opera and Neapolitan folksongs.

This was a great treat for me, as, having been singing for the past eight years, I am familiar with most of the arias and could not resist joining in discreetly, hopefully unheard and unseen.

But the real treasure awaited me when I entered the tiny synagogue and found myself gazing in awe at the richness of this totally unexpected discovery.

Conegliano Veneto is a small town situated between Padua and Venice and it was from here that this architectural gem originated.

Jews had lived there since the 16th century and prayed regularly in front of its ornately carved golden ark. To confirm its authenticity, one of the carved panels is dedicated to a Rabbi ottolengho who died in 1615.

Most of the interior fixtures and fittings were moved to a newer synagogue in 1701 which continued to function until the First World War, the last service held there being Yom Kippur 1918 for Jewish soldiers serving in the Austro-Hungarian army.

From then on it was no longer used and it was only in 1951 that, thanks to the initiative of a group of Italian Jews led by Dr Umberto Nahon, the interior of the synagogue was carefully packed up and transported to Jerusalem.

Italian-Jewish residents of Jerusalem had been praying together since 1941 in the city. It therefore seemed fitting for the Conegliano Synagogue to find its resting place in central Jerusalem on Hillel Street at the Schmidt compound, built in 1875 as a Catholic school and hostel for pilgrims from Syria, but latterly used by other groups.

However, it was not until 1989 that it was finally completed with the restoration of the women's gallery, four of the latticework screens being originals and the others reconstructed.

Today the community holds social events in the magnificent octagonal room on the ground floor which boasts a splendid domed ceiling decorated with frescoes of religious scenes dating back to when it was part of the Catholic school.

Their use of this room is a reflection of the eclectic nature of Italian Jewry who, whilst wholly committed to their own traditions, have always been open to and accepting of those of other cultures.

But this synagogue is much more than a mere 'tourist' destination. It is unique in that regular services are held here following the Bnei Roma tradition, one of the most ancient in Judaism, dating back to the time of the Second Temple.

The only other synagogues holding Bnei Roma services are in Rome itself, where Jews have lived for over two thousand years, longer than in any other European city. A Jewish community existed well before 139 B.C.E when Praetor Hispanus issued a decree expelling all Jews who, he claimed, "were infecting Roman customs". Not a lot has changed! 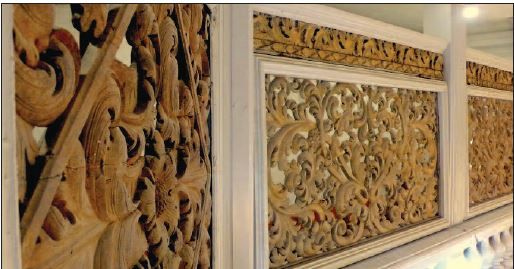 Screens for the women’s section of the synagogue 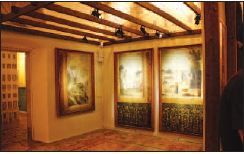 The succah inside the synagogue

The complex on Hillel Street also houses the Museum of Italian Jewish Art, named after Dr Umberto Nahon who collected not just the Conegliano synagogue but many other precious artefacts reflecting the richness of Jewish life in Italy from the Renaissance until today.

These he shipped to Israel with the help of Italian-Jewish communities in both countries. In 1983 the Museum opened, creating a magnificent collection that presents the cultural legacy of Italian Jewry in all its diversity and creativity.

I saw an outstanding exhibition called The Jewish Court of Venice, displaying Jewish heritage 500 years after the establishment of the first Ghetto, in Venice, in 1516. It was breathtaking, especially the beautifully embroidered textile panels and magnificent lace items.

Venice was the acknowledged center of needle and bobbin lace from the sixteenth century continuing until the nineteenth century. Well-to-do women would practice this art, including Jewish women who made artefacts for the synagogue and also to adorn their clothing. The exhibition also contained a delightful hand-painted succah decorated with Italianate landscapes.

I was welcomed warmly by Mirella, a charming Italian volunteer who offered to show me around. I was delighted to accept, particularly having been an Italophile since my teens when I began learning the language. Years later I studied sociology at Durham University but somehow managed to persuade my professor to allow me to take Italian instead of social policy and administration - a welcome relief for me.

As a result, on leaving university I was asked to teach Italian evening classes. I had decided against it, however, on visiting the college to reject their offer, I entered the appointed meeting room to be greeted by forty or so eagerly expectant students to whom I was introduced as their new teacher. A case of fait accompli. or in Italian 'affare fatto'.

Three of the students wanted to take exams, so I suggested that they might fare better elsewhere. of the remainder, many were seniors who only wanted to know how to order meals whilst on holiday. Another was a young secretary who said, "All I want to know is how to say "Are you very rich?" in Italian. I let her stay. These classes (using a language laboratory and earphones) continued twice a week for two years. Many of my students would fall asleep in their booths, but I never disturbed them as it seemed kinder to let them nap. We did have fun though, making Spaghetti Bolognese at Christmas and singing Funiculi Funicula in unison.

Mirella urged me to go to an Italian conversation evening at the synagogue. I duly attended but, as I feared, I didn't understand a great deal, owing to my hearing loss rather than my comprehension. An engaging speaker talked about Kissing in the Bible – which seemed an appropriately Italian topic, which I will have to investigate more!

Overall what excites me about the Italian synagogue and museum is that, even after so very many years, the Bnei Roma tradition is being maintained not as an archaic practice, but as something relevant today. The museum administrators have, through an exciting program of cultural events – language, music, lectures on many topics and in particular activities for children – created a center where everyone, Italian or not, can share in the richness that the Italian Jewish heritage offers in abundance.

For me this is the joy of being part of this multi-cultural society that has embraced so many diverse peoples over the years into the complex mosaic that is today's Israel.