Mar 04 Posted by Ruth Corman in April 2020
March 2, 2020, marked the third anniversary of the death of David Rubinger. Born in Vienna in 1924, he emigrated to British Palestine in 1939 and developed a passion for photography while serving in the British army's Jewish Brigade. After fighting in Israel's War of independence he became a professional news photographer, reporting on all Israel's wars from the front line. He was a correspondent for Time-Life magazine for 60 years. Shimon Peres called Rubinger "the photographer of the nation in the making" and in 1997 he was the first photographer to win the prestigious Israel Prize acknowledging his services to the media.

I met David for the first time nearly 40 years ago. My husband had been to see David's exhibition, Witness to an Era", in Jerusalem and urged me to see it. Once I did, I realized it was special. I was then Director of the British Israel Arts Foundation, established to promote cultural exchange between Britain and Israel. This exhibition was perfect for furthering our objectives so, to celebrate Israel's 40th Anniversary, we shipped it to London where it featured in a major event at Alexandra Palace. I remember David as something of a prima donna, or, perhaps, more kindly, a perfectionist. I have never worked so hard as I did that week, so maybe I was less than responsive to his various demands.

Over the years we kept in touch, but were brought together in 2004 as a result of a tragedy when his companion was murdered by her gardener. David found the body. It was in all the press. I immediately phoned to offer condolences and visited him. He showed me his new work that focused on Israel's political leaders and invited me to curate an exhibition for him. Of course I agreed, realizing how important it was for David (aged 80) to keep busy and recover from what had happened.

We met or spoke daily, during which time I recognized that David was a man with an endless supply of stories about his fascinating life. I asked why he had never written his life story. He replied, "Oh, others have suggested it, but I never got round to it and anyway I can't write, I just take pictures". So I offered to write it for him and in April 2005 we began.

We were fortunate that we could take advantage of new technology, particularly Skype on which we spoke to each other several times a day when I returned to London. I would ask endless questions, type his responses and then spend many hours drafting my texts.

David had an astounding memory for facts, people, places and dates. Nevertheless, I researched and checked everything and only once was he incorrect, and then by just one day.

He had amassed a huge archive of photographs and had written a diary every day since 1967. This, plus one from when he was fourteen and living in Vienna, provided me with wonderful source material.

My role was drawing out the details of his life and putting them together in a logical, readable and entertaining form. I affected ignorance of historical facts, in order not to assume knowledge on the part of my readers and constantly asked David to elaborate.He was aghast at my apparent ignorance, but in this way I was able to draw out the smallest details. Sometimes it was like extracting teeth.

We fought a lot about the use of words and correct grammar. He complained that I did not use enough capital letters and thought my punctuation needed improving. Considering that he was an autodidact, finishing full-time education at 14, he was extraordinarily knowledgeable about most things and, as he would say, was always right.

David's political beliefs were central to his life and remarkably he remained true to the views he held when he first came to Palestine at 15, with Hashomer Hatzair, the Socialist Zionist secular youth movement. I soon learned that there was little point in arguing with him about anything, as he would win any dispute, first, because he knew more than me, and second, he shouted louder.He had the respect and friendship of Israel's political leaders from all parties, although he was unlikely to ever give most of them his vote. His personal friendships managed to override the strength of his political convictions.

The attribute that most people observed on first meeting David was his consummate charm. Somehow, he retained this legendary Viennese quality despite having left there in his early teens. Everyone fell for him, and he was masterful at turning on the charm. "How beautiful you look today" I heard him say to almost every woman he met. It was touching to see their reaction. They glowed. They adored him. I heard many women profess how he was more attractive than a man half his years, and even men seemed to succumb to his charm.

One side of David not revealed in the biography is the Jekyll and Hyde transformation that took place once he got behind the wheel of his car. God help anyone who got in his way when he was driving. Pity the poor guy who cut in ahead of him or did not accelerate immediately the lights changed. I can still see David driving rapidly down a crowded road to block an oncoming lorry, refusing to give way, despite the fact that you should never argue with a vehicle bigger than your own. This urbane, affable, and essentially courteous character turned into the man who probably invented road rage. His car stops, windows are rolled down and a heated exchange takes place, just stopping short of fisticuffs. David's aggression was particularly addressed to one specific group in Israel—the settlers. If he ever saw anyone wearing a kippah and carrying a gun, woe betide them, for they especially came in for the cutting edge of his wrath.

David was also a self-confessed loser, by which I mean that, when driving, he constantly got lost. He admitted having absolutely no sense of direction and, despite living in Jerusalem for 65 years, could never find his way around. To overcome this, he was one of the first to buy an automatic navigator. We once travelled to the north of Israel accompanied by this female voice advising us where and when to turn left or right. It was an experience, the end result of which was David returning the navigator to the manufacturer with a strong letter of complaint. As he said to me several times on that journey, "That b…., I paid good money for her and all she does is send me the wrong way." He replaced her with a male voice which, he felt, did the job so much better. 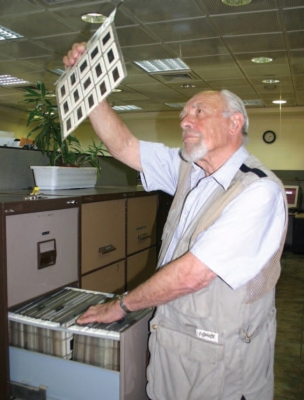 Photograher David Rubinger checking on some of his slides

David's passion for gadgetry was combined with the fact that for years he was a would-be pilot, who never had the opportunity to fly a plane. This was all solved in 1990 when the first flight simulators became available. David was one of the first to buy one. From then on he travelled expertly all over the world while managing to stay in the safety of his own living room.

Despite his advancing years when, so folk wisdom has it, one achieves serenity, David could explode in an instant. This led to some exciting exchanges. Once in Paris he disappeared into the gents' toilet and did not reappear for a long time. When he did, he was so irate steam was coming out of his ears. He exploded in a tirade of abuse, upbraiding the manager of the restaurant and the French nation in general. The cause of this outburst was, that while he was in the toilet, all the lights had gone off, presumably on a time switch, leaving him literally with his pants down, in the dark, in a foreign country and with no visible means of escape. "Typical of the French," he said, "too mean to leave the lights on long enough for me to finish my business." Thankfully, his anger was short-lived, in this case short enough for us to enjoy a good lunch.

It was during this visit that I took him to find the café where he had met Claudette, the French girl who had given him his first camera. We found the cafe, and I photographed him standing outside—62 years since he was last there!

In spite of all of this, I would not have missed the three years I spent writing David's story for anything. Apart from the fact that, in a modest way I have been privileged to present a central part of Israel's formative history to the world, the opportunity to spend time with this irascible, infuriating but enduringly lovable character was something that I shall cherish forever.

"Ruthie, I have just finished reading your text sent by our publisher. To say I am thrilled is the understatement of the year. Maybe I am entirely non-objective, but I think you did a marvelous job writing it.You have put a 'crown' on my life.Thank you".