Peeking in at Peki’in 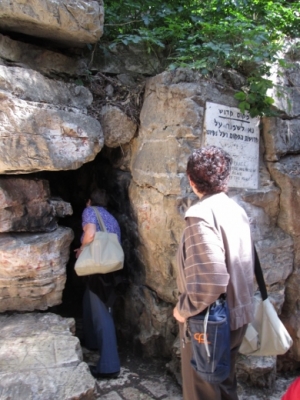 Taking a peek inside the cave in Peki’in

Story and Photos by Yael Meyer

On a beautiful Israeli spring day, a group of inveterate ESRA day-trippers hopped on a bus to head up north to experience the variety of religions the Galilee hosts. We were also able to enjoy the green fields and the spring flowers as the bus headed north from Tel Aviv, Raanana and Yokneam towards our first destination – the town of Peki'in.

Peki'in is currently a mostly Druse town, but it includes some Christian residents and one remaining Jewish resident as well. Jewish tradition says that the Peki'in Jewish community has lived there continuously from the Second Temple period to the present time. During the Arab riots of the late 1930s, many Jews living there were killed and the rest fled for safer locations. One family returned in 1940: the Zinati family consisting of mother, father and young Margalit, their daughter, who stayed on to care for her parents until their deaths and remains in the town today, still caring for her house and garden, and protecting the ancient synagogue.

Our first stop in town was at the cave where Rabbi Shimon Bar Yochai and his son, Elazar, are said to have hidden for 13 years from the conquering Romans. According to legend, next to the mouth of the cave a carob tree sprang up and a spring of fresh water gushed forth. One can see an ancient carob tree just outside the narrow entrance to the cave. Rabbi Shimon Bar Yochai is credited with writing the Zohar.

After peeking into the cave we descended the steep, narrow stairs and alleys into the center of the town, where the village spring and an inspiring Druse statue are located. The statue is of two Druse men, one in traditional clothing and one in modern clothing. 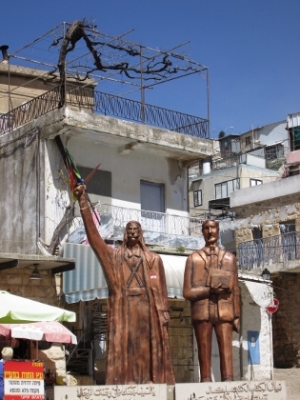 The traditionally-clothed Druse man holds a sword and the Druse flag, while the modern-clothed man holds two books. It's interesting to note that stickers have been pasted on both figures calling upon the Finance Minister not to cut the education budget! Some of us took advantage of the brief time-out at the center square to purchase refreshing freshly squeezed pomegranate juice before we went on to find the ancient synagogue. On our way to the synagogue we enjoyed some amusing sculptures adorning the rooftops of buildings.

The synagogue is believed to be built on the site of an older synagogue, which dated back to the days of the Second Temple. Into its walls are built two stones said to have been taken from the walls of the Jewish Temple in Jerusalem. One depicts a menorah, shofar and lulav, and the second depicts a Torah shrine. The stones were discovered in 1926 and 1930. The current structure dates from 1873. The construction was funded by Rafael Halevy from Beirut. In 1955 the Ministry of Religious Affairs renovated the building at the request of President Yitzhak Ben-Zvi, and this event is commemorated on the 100 new shekels banknote printed in 1998 which features Yitzhak Ben-Zvi and also the Peki'in synagogue on the reverse side. Currently, the synagogue is only used for special events like bar and bat mitzvahs. The synagogue key is guarded by Margalit Zinati, who is in her 80s but still quite sharp, and whom we ran into walking around the streets of the town before we were privileged to visit her in her house and hear about her life story.

Our last stop in Peki'in was at the factory store of Safta Jamilla, where we learned about the medicinal and beauty value of the special soaps and oils made according to Safta Jamilla's secret recipes. The factory provides employment to women from all religions, but primarily to Druse women who would have little other opportunity for gainful employment outside the home. Naturally, many of our group contributed to the success of the company by buying soaps and oils.

By this time of the day, we were ready to enjoy a picnic lunch at the Baram National Park among the blooming trees. A school-group of Maronite Christian children was also visiting and playing at the site of the historic location of the Maronite village, which their families had left during Israel's War of Independence, after being promised the right to return at the end of the hostilities. The promise has yet to be kept, and all that remains are the ruins of their homes and a church which is still used on Sundays. 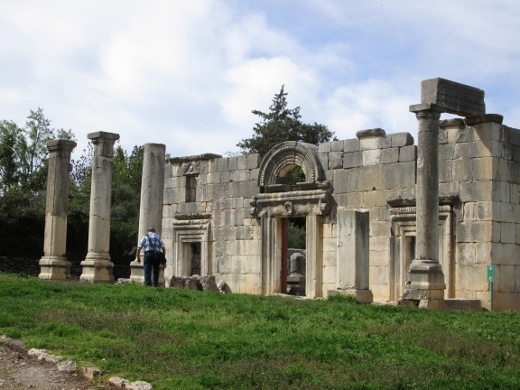 The ruins of the ancient synagogue at Baram National Park

Meanwhile, Baram was an ancient Jewish town during the time of the Mishna that originally had two synagogues, only one of which is still standing in ruins partially restored. The architecture of the synagogue is typical of synagogues in the Galilee during the Talmudic period and has three adorned entrances: the middle entrance has an arched doorway, while the side entrances are square. Columns that supported a roof outside of the building can be seen, as well as columns that divided the inside.

After briefly touring the Baram synagogue, we continued on to Mount Meron, where we stopped first to enjoy the spring flowers while some members of the group took a short hike to the vista point from where Mount Hermon and the area around Safed and the Kinneret can be seen. We then visited the tomb of Rabbi Shimon Bar Yochai, where thousands converge on Lag B'Omer to worship and celebrate his life. Throughout the year families bring their three-year-old boys to have their first haircut there. Having seen the cave where he had hidden at the beginning of our trip, his tomb was an appropriate place to end our tour.