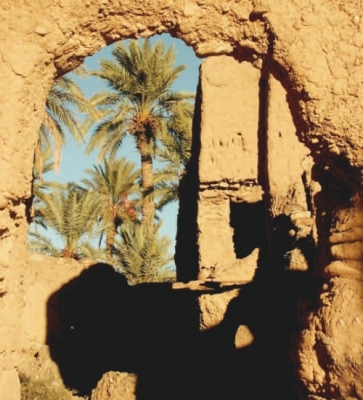 A view of the old Kasbah in Skoura, Morocco

Ten years ago, we had the holiday from hell in Marrakesh. It began with an 11-hour delay at Gibraltar airport in torrential rain - an experience that made me wonder why we don't go down on our knees and beg the Spaniards to take the colony back.

Onward travel plans were aborted due to our late arrival. We were deposited in a 'plastic' hotel where I immediately fell ill with flu and spent the next nine days in bed watching Spanish T.V. and feeling sorry for myself.

Why we decided to go there again, I am not sure, but Charles assured me, "this year will be different. We will go south – to Skoura." We flew into Marrakesh. Everything went perfectly, with one minor hiccup - Charles's suitcase did not arrive.

"Never mind," said I. "Regard it as a challenge to survive without it. Think of the sense of freedom you will experience unencumbered by possessions." Charles visibly paled, but heroically severed the umbilical cord with his suitcase and in true British style prepared to 'make the best of it'. 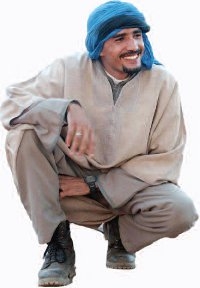 After a night in Marrakesh we were driven five hours to Berber up into the Atlas mountains by our Berber guide.
Communication between us was non-existent. He no speak French, we no speak Berber. In desperation, we managed to signal him to stop at the only habitation around - a roadside café. It was bleak. It was sleeting.

A group of mysterious-looking moustachioed Berbers were eating something resembling instant botulism. Each man wore a familiar chequered scarf to keep out the driving wind – immediately recognisable as a Burberry. Obviously this was what any self-respecting Berber should wear…

What is it that compels us to leave cosy middle class homes and travel long distances in order to spend time in acute discomfort? A gerontologist friend explained this by saying that 'at a certain age' it is essential to travel with an element of anxiety and tension. This, he maintained, keeps you young and alert.

So be it. After another two hours, our driver suddenly went off the road onto rough ground into a wadi. It was pitch dark. We bumped over rocks and rutted tracks – convinced that we were lost or kidnapped – when, to our astonishment, we entered the Valley of A Thousand Kasbahs and reached our destination, Dar Ahlam, in Skoura.

On entering, I felt I had died and gone to designer heaven.

A log fire glowed and jazz music played in the background. Tasteful artefacts were perfectly placed, the air was perfumed with aromatic candles and fresh flowers greeted us at every turn. 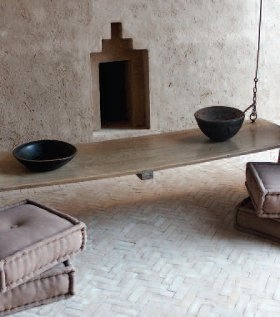 An interior of Dar Ahlam

A guide and a 4WD awaited our pleasure, as did a masseuse, a hammam and a pool. Complimentary drinks, patisserie and fruits were always available.

Meals were pure theater, arranged at various locations in the Kasbah - the gardens, on the roof under the stars, in secluded rooms surrounded by hundreds of rose petals or gourds filled with flickering candles. Attention to detail was formidable. Knowing our dietary needs, a vegetarian menu changed each day and soya milk was flown in from Paris.

Daily tours included one memorable dusk ride to an oasis on camels. It was December 25 and, on cue, 'three wise men' emerged over the horizon carrying silver trays of mint tea and delicacies to greet us at our camp-site fire.

Each day, as we returned to the Kasbah, a tray of freshly squeezed chilled drinks awaited us. I could never work out how they knew exactly when we would arrive.

The other guests were French, including the Paris Opera Director with his entourage of eight.

Charles being 'underwear challenged' was a real ice-breaker. It was touching to see the male bonding that resulted with offers of unmentionables coming from all directions. Charles delicately declined, having determined to go 'native' and wear a djellabah with 'whatever it is these chaps have underneath'.

Days two, three and four dawned sans pants, sans socks, sans everything. On day five the suitcase arrived. Charles was visibly disappointed, having mentally prepared himself to haggle for essentials in the market that same day.

Skoura is a one-camel town on the dried up bed of a wadi with a backdrop of snow-capped Atlas Mountains. Jews lived there until 1971 and flourishing communities existed in nearby towns and villages, from Zagora in the south to others in the mountains. It had two Jewish cemeteries - large walled enclosures; the tombstones, with neither identification nor embellishment, now tended by locals, paid by Jewish families overseas.

Legend claims that Jews settled in Morocco before the destruction of the First Temple, but the earliest written evidence dates from the 2nd century CE, when many Berbers wereconverted to Judaism some 500 years before the Arab conquest.

Our Berber guides were at pains to point out how different they were from Arabs. Morocco, they said, had comprised three important groups - Arabs, Berbers and Jews. Not once did we sense anti-Jewish or anti-Israel feeling. Our guides had Jewish friends now living in Israel, France or Canada with whom they were in regular contact.

The Moroccan Jews had held positions of considerable influence, particularly in the 1300s when they controlled the Saharan gold trade, foreign exchange with Christian countries and shipping.

In the south, they were famed as craftsmen. We visited Tiznaghte, center of the carpet trade, and saw special designs produced in Jewish villages that differed from those made by the Berbers. In one cooperative, the proprietor proudly showed us elaborately carved wooden doors decorated with the Star of David. He refused to sell them as they were destined for his friend Moshe in Zurich.

In another village, with neither electricity nor water, we saw a huge walled tomb. A rabbi's wife had purchased the land from the local Sheikh and was now buried there. Every year her family came from abroad to visit her grave.

After five glorious days, we moved to another highly recommended hotel in Taroudant. Being Jewish, our custom on arrival is to immediately change rooms. We were upgraded to a vast and unwelcoming suite. An open fire filled the room, our lungs and everything else with thick black smoke. On complaining we were told, "Baroness Thyssen stayed here last week and she didn't object". "Good for her", said I.

The décor throughout was dull and shabby, the food mediocre and the proprietress patronising in the extreme. Jacques Chirac, the then French President, was a guest, as was Catherine Deneuve. Consequently the place was heaving with 'inconspicuous' black suited men in dark glasses. Madame hostess trotted behind Chirac and his white poodle at every opportunity. The place resembled a private club from which we were obviously excluded.

Other guests, mostly Brits, expressed astonishment to hear that we had been sightseeing. "Whatever for?" exclaimed one brandy-soaked visitor. He no doubt returned home claiming how great Morocco was, without actually leaving the gates of the hotel or, God forbid, encountering the 'natives'.

One excursion took us to a remote hilltop village. It was market day, but strangely, only men and boys attended; women and girls were nowhere to be seen - a policy that I have heartily adopted, Charles now being despatched to Waitrose every Friday to do the shopping.

On another occasion, we walked between two hill villages and passed a citrus orchard. The local farmer told us how every September a rabbi came from Quebec to buy all his fruit. It was an etrog orchard.

I learned that Moroccan Jewry had had a turbulent history, periodically rising to positions of great power. In the 16th /17th centuries the Marranos had introduced a process for extracting sugar from sugar cane, resulting in Morocco becoming a world leader in sugar production. The beeswax, rubber and ostrich feather industries were also the sole province of the Jews, and as late as 1912, most maritime trade was controlled by a limited number of Jewish merchants.

Nevertheless, many urban Jewish communities were impoverished. After the establishment of Israel in 1948 and the subsequent attacks by their Muslim neighbours, many Moroccan Jews emigrated to Israel, France and Canada. Ten years ago the Jewish population was around 15,000; today it has fallen to 1,500.

Unquestionably, the country they left behind lost a valuable asset in the rich cultural heritage that the Jews had contributed over the centuries. As Abdul, our guide, said when we left, "Morocco without Jews is like bread without salt".