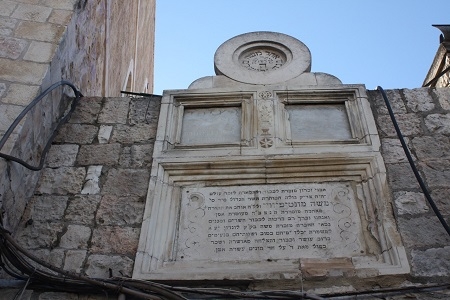 Dedication to Sir Moses Montefiore at the entrance of Ohel Moshe

Story and photos by Ruth Corman

One of the most fascinating areas in Jerusalem is Nachlaot - near Mahane Yehuda Market. Its winding lanes and alleyways reveal a variety of architecture, hidden courtyards, artists' studios and a proliferation of synagogues.

The original residents arrived in the 1870s to escape the overcrowded, unhealthy living conditions in the Old City. The first community built in Nachlaot was Mishkenot Yisrael. Sir Moses Montefiore, the British Jewish philanthropist, established it outside the Old City walls at Mishkenot Sha'ananim, followed by two Nachlaot communities, Mazkeret Moshe for Ashkenazim and Ohel Moshe for Sephardim in 1882. In 1900, Jews from Syria arrived and in 1925, the Yemenites established Nachalat Achim. Nachlaot ultimately comprised 23 groups including Kurds, Greeks, Persians, Italians, Armenians, Africans and Ashkenazim from various countries.

Walking through the narrow cobbled streets brings to life the rich tapestry of cultures living together harmoniously, with photographs and texts displayed on the house walls telling of the families who once lived there.

Daniel Senior's ancestors were expelled from Spain in 1492, fled to Turkey and eventually came to Jerusalem. He lived in the Old City, running a vegetable shop in partnership with an Arab. As one of the first to move to Ohel Moshe, then surrounded by fields, he was regarded as the Mukhtar (Head of the Village). His home comprised one room, on top of which he built a second and then a third - the ground floor eventually becoming a store. 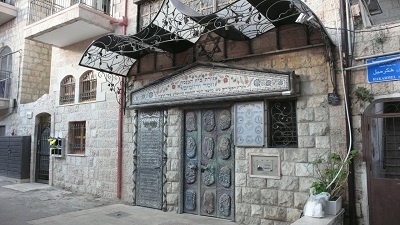 The ornate and striking exterior of Ades Synagogue in Jerusalem

Rabbi Binyamin Halevy's family fled from Spain to Livorno, Italy, where they remained for 240 years, coming to Jerusalem in 1732. Halevy's descendants became scholars, rabbis and community leaders. One was Chief Rabbi. It was he who supervised the rebuilding of a water and sewage system for Nachlaot damaged by earthquake. He made a huge contribution to Jewish life and was an ardent Zionist. Another was an emissary who, in 1882, travelled to India to investigate the Black Jews of Cochin whose history dates back to the 12th century. He returned, declaring that they should be allowed to convert to Judaism, although it took until 1950 for the majority of them to reach Israel. Halevy's descendants are ninth generation Israelis.

Others commemorated in the plaques are Rabbi Shalom Hadaya, who chose Ohel Moshe because "they speak Ladino, which I do not understand, so I will not be able to hear slander" (lashon hara), and Avraham Cohen - the Dairyman for Nachlaot - whose family have lived in Israel for ten generations.

The first Sephardi Israeli president, Yitzchak Navon, was born in Ohel Moshe in 1921, descended from Spanish Jews who settled in Turkey after fleeing Spain. They moved to Jerusalem in 1670. As well as being a diplomat and an academic, Navon was an accomplished author, and reminiscences of his childhood in Nachlaot provided the inspiration for his play Bustan Sephardi in 1970. Written in Ladino, it is the longest-running play to appear at Habima Theater where it ran for 28 years. It celebrates, through stories and songs, the vibrant life of Ohel Moshe in the 1930s.

At one time there were 300 synagogues in Nachlaot, probably the largest number to be built anywhere in the world in such close proximity. Some were simply a room to accommodate the ten men required for communal prayers. Today there remain around 100, offering a choice of prayer services to suit all tastes.

Jews from Aleppo built the Ades synagogue, renowned for its unique liturgical style - a cycle of Cabalistic poetry sung at 3a.m. on Shabbat mornings during the winter months. Apparently it plays to full houses, and I considered attending, but common sense prevailed. Instead I visited the synagogue at a respectable hour, found the door ajar and was permitted to enter and take photographs. The interior is exquisite - the Ark occupying the entire eastern wall and made of carved walnut inlaid with mother-of-pearl. It came from Damascus over 100 years ago. A mural adorns another wall, created by one of founders of the Bezalel Art School.

The Spanish, North African-style Or Zarua Synagogue is now a historic preservation site, and nearby is the richly-decorated Chessed Ve Rachamim Sephardi synagogue, with depictions of the Twelve Tribes and the Eshet Chayil (Woman of Valor) poem on its frontage. The building is eclectic, resembling something from Grimm's fairy tales, but it was still surprising to discover that it had once been a pub. Hardly something to expect in Jerusalem, akin to the fish and chips shop I found in Mahane Yehuda. 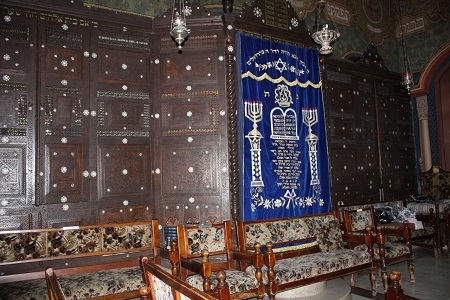 The Ark inside Ades Synagogue

Ninety years ago, a local butcher, Isaac Emosa, offered the pub owner £10 sterling to vacate the premises immediately. He accepted. A descendant, Cantor Mori Emosa, today leads the services - it is said that his 'utterly precise cantillation' is operatic aria. (Jacob Solomon)

After WW1 6,000 people lived in Nachlaot. New immigrants arrived in the 1920s but many preferred the newer neighborhoods and Nachlaot became home to those who rented properties, so the area became neglected. Following the establishment of Israel in 1948, more people arrived, including those Jews thrown out of the Jewish Quarter of the Old City by the Jordanians and others fleeing from North African countries.

Following reunification of the City in 1967, the population increased rapidly but fell to 4,000 by 1988 as it had become a slum. However in 1991 the area was selected for renovation with grants from the municipality. This created a new lifeline for Nachlaot whereby today it is a melting pot of artists, musicians, new age hipsters and health gurus who mix seamlessly with traditional religious communities.

Researching Nachlaot demonstrated to me just how fortunate it was that those early visionaries followed their dream, crossing continents, often trekking across mountains and deserts to reach their promised land. One cannot imagine their trials and tribulations en route, but they arrived, and in doing so contributed significantly to the development of this country.

Today it is invigorating to meet some of the impressive young people dedicating their lives to regenerating a love of Zion in the hearts of their contemporaries. 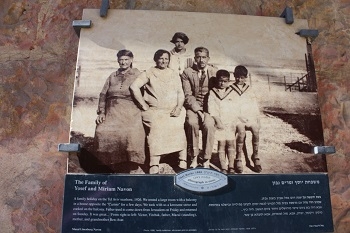 They aim to restore some of the values and joy in Judaism that for many has been lost. I spoke with David Abitbol for whom the Abrahamic tradition of hospitality to strangers is 'a cultural imperative'. Each Shabbat,he and his wife, Ayo, invite guests to their home where up to 20 or so are hosted by this warm, energetic and intelligent couple. They are both excellent cooks who spend time and energy exploring the world of food with the emphasis on nutrition and health. David is an avowed 'foodie' who established a website called 'Jewlicious'.

Ayo (studying for her Masters in Natural Resource Management), recently hosted a chocolate-making workshop and gives yoga lessons (not at the same time) and the couple help to organize musical and cultural events.

and Aaron and Yonatan Razel lived there. On my last visit, whilst walking down a peaceful lane I heard fascinating sounds emanating from a building - this turned out to be 'Ethnic Musical' a studio specializing in promoting Central Asian music from countries such as Persia, Armenia, Turkey and Azerbaijan. They sell a beautiful range of locally handmade ouds. I also learned about the Kamanche, the PersianTar and the eight-stringed Tanbur (instrument of lovers) - all new to me. I spoke to some musical devotees who, when asked why they chose to play these instruments, responded: "the instrument chose me". Some were descendants of the Kurdish Jews for whom this music would have been familiar. It was moving to see how the owners of Ethnic Musical are revitalizing traditional music from the original dwellers of Nachlaot and simultaneously enriching the lives of the vibrant young community which now lives and works there.