While Israeli winemakers are being awarded accolades across the globe for their quality wines, one segment that has lagged behind the rest is rosés. The not too distant past history of tepid unremarkable bulk rosés being made by Israel's largest wineries and the proliferation of white zinfandel in the United States (Israel's largest export market) had both smeared the reputation of rosés for winemakers in Israel, so many winemakers stayed clear.

It's a shame, since each Mediterranean wine region makes its version of rosé. Whether it's called vin gris, rosado, rosato or oeil de pedrix, rosé is a style of wine that suits warmer wine regions. It pairs quite well with what we consider as Mediterranean cuisine, whether it is fish, eggs, salads, poultry, pasta, pizza or pate.

Rosé is typically fresh and fruity, made totally or at least partially from red grapes but in a white wine style in that it's made with little or no contact with the skins (which gives a wine its color). Rosés are typically best served chilled, which makes them ideal wines for picnics, days at the beach, backyard barbecues, boating, or for brunches.

Uri Hetz, the Oregon State trained winemaker of Chateau Golan, was one of the first Israeli advocates to invest in the potential of quality Israeli rosés in 2004. The 2016 Chateau Golan Geshem Rose at NIS 110 (12.5% alc.), is 90% Grenache and 10% Syrah with the Grenache offering raspberry notes and the racy acidity one desires of a rosé (much like a white) with a bit of structure and complexity added by the Syrah. 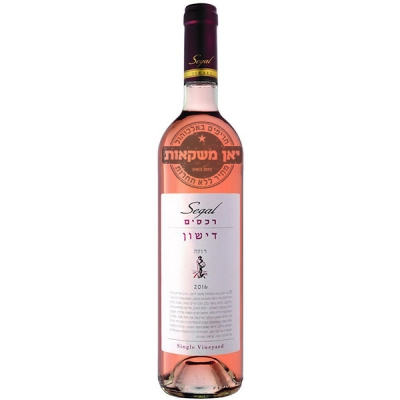 Uri notes that a previous issue with rosés was that wineries (overseas as much in Israel) were not taking them seriously, so they weren't typically good wines. "We treat our rosé as seriously as any other wine and when you do so, there's no reason a rosé can't be made to be a serious wine."

Uri's fine example and two other trends helped turn things around for Israeli made rosé. First, Israeli wines in general have made dramatically positive impressions on international wine publications and critics. Concurrently, international producers are making better rosés for more discriminating clients. So, more and more wineries have the confidence to be offering highly desirable quality rosés that are hitting store shelves and restaurant tables.

Since rosé only accounts for about six percent of the Israeli market (compared to about ten percent in the USA) there's many of you yet to indulge, so here are some insights into what to try and what's in front of you.

There are a few main ways to make rosé. First, there are wineries that commit red grapes entirely to a rosé's production. In this method, typically referred to as extraction, the juice of the grapes is left on the skins for a limited amount of time (typically from two hours up to two days) depending on how much color and other compounds the winemaker wants the skins to impart to the wine. This in contrast to when making red wine where the skins could be kept with the juice for weeks.

The second common method of making rosé is bleeding (also called Saignée). Bleeding is when a certain percentage of a red wine's juice is drained from its skins during winemaking so that the remaining juice is left with a higher concentration of skins to intensify a wine from the same grapes.

The third typical way to make rosé is to blend the juices of red and white wine grapes. Although, this is common in sparkling wine production, it's generally looked down upon when making still rosé.

In some instances, there will even be combinations of the first two methods where the winemaker extracted or bled off juice from multiple grape types, vineyards or harvest times.

Most of the largest Israeli wineries offer rosés, so finding a simple rosé (often a little sweet "semi-dry" also called "blush") for between NIS 25 to NIS 35 is a reasonable expectation, especially around holidays. All the largest wineries have them but there might not be many at this price worthy of distinction. When you get to the NIS 40-50 range, the rosés get to be a bit more interesting. For instance, try a 2016 Tishbi Grenache & Cabernet Sauvignon blend (13% alc.) for NIS 40 or the 2016 Dalton's Kna'an Rosé (12% alc.), which is a popular semi-dry in restaurants retailing for about NIS 50.

A little pricier, yet readily available is a 2016 Carmel 2 Vats Rosé (11.5%) for NIS 55. A Rhone blend of Grenache, Carignan and Mourvedre all contribute to the wine's complexity yet shine by highlighting the wine's acidity, body and fruit respectfully. It's definitely one of the better value for money rosés Israel has to offer.

At a similar price and style is the lesser known 2016 Netofa Domaine Rosé, which is a classic GSM blend of Grenache, Syrah and Mourvedre for NIS 49 but with a bit more bite at 13.3% alc. A good deal if you can find it.

Vitken, another early advocate for rosés, offers a 2016 Vitken Israeli Journey Rosé for NIS 69 as a blend of Grenache Noir and Carignan with the 2016 Dalton Alma Coral coming in at the same price point. The 2016 Montefiore Carignan Rosé (13%) is a recent offering from Montefiore of 80% bold and fruity Carignan softened with 20% Merlot which you can taste at their new tasting room in Jaffa or get a bottle for NIS 70.

Rhone or Mediterranean style blends are becoming the rule where once they were the exception and the 2015 Jacques Capsouto Rosé (13.5%) is another fine example with a unique Cinsault, Grenache and Mourvedre blend, combining for a pale but expressive wine at NIS 80.

Less and less are we seeing 100% Bordeaux only rosés like the Daddah or the dry 100% Cabernet Sauvignon 2016 Alona Harmony Rosé (13.6%) for NIS 80. Yet, the Alona's fruitiness and depth from 100% extraction shows why some remain. With 700 bottles made, it makes a rare but delightful find.

At the higher end are rosé offerings from Castel, Flam, Somek, Bravdo, Yatir and Recanati that fall between NIS 85 and NIS 100 and each have earned avid fans.

Recanati has both a Merlot/Barbera NIS 59 Rosé and a NIS 99 Gris de Marselan, while Pelter makes rosés for both its original Pelter label and its kosher Matar label. With some wineries now offering more than one rosé in their portfolio, it's evidence of an expanding market and winemakers' confidence in the style.

All the roses mentioned are recommended for their quality and price point. Explore and you are bound to find one or more you like, based on the choices of grapes, the style (extraction or bleeding, dry or semi-dry) or by the winery.

When I moved to Israel in 2008, I had to struggle to find enough interesting rosés to write about and today I'm happy to say there were a few worthy ones I failed to mention for lack of space.