In the footsteps of Baron Rothschild 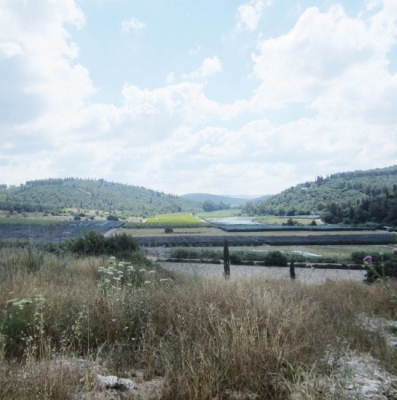 It was on a beautiful spring day that our hiking group set off from a spot adjacent to a "winter pond", a low-lying area which becomes a pond only during the (hopefully) rainy winter, drying up soon after winter ends. We were in Zichron Yaacov, the Rothschild-founded town. Our route was to be from the coastal plain into the Carmel Mountain highlands. This is a beautiful area with abundant animal and plant life. Our excellent guide, Reuven, told us about the fauna in the area, especially the endangered salamanders - not a common sight for Israelis.

This hike was particularly scenic, with green vistas and blue skies everywhere we looked.

Our first stop was the bucolic village of Bat Shlomo, located just east of Zichron Yaacov, across the road from the "new" Bat Shlomo, a small residential town. The original village was founded in 1889, seven years after Zichron Yaacov. We walked along the original main (and only) street with seven houses on either side and a synagogue. Baron Rothschild was also the benefactor of Bat Shlomo, helping the original inhabitants to get started as farmers, and to build the beautiful, quaint stone houses with red-tiled roofs, many of which remain today. 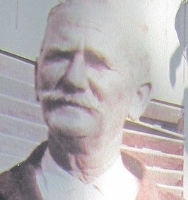 The founder of Bat Shlomo

Behind these houses are farmyards with cork-like mulberry trees once planted by order of the Baron, who installed managers in all his projects to ensure that his plans were followed through. Silk production was tried and abandoned, but nurturing vineyards succeeded. The wine which was produced matured in the wine cellars of Zichron Yaakov, making this area, along with Rishon LeZion, one of Israel's two most prodigious wine-making regions.
We stopped at the rustic stone house of Zvi Shwartzman and his family, the fourth generation of this family in Bat Shlomo. This is the only house in the picturesque village where the working farm life carries on as it always did. The Shwartzman family doesn't favor progress and innovation, preferring to leave things pretty much the way they always used to be. In the farmyard, contented hens lay their eggs in every hidden corner. The cows are still milked by hand and Ziv makes his delicious cheeses in the traditional fashion, producing quality milk which in turn produces organic cheeses. 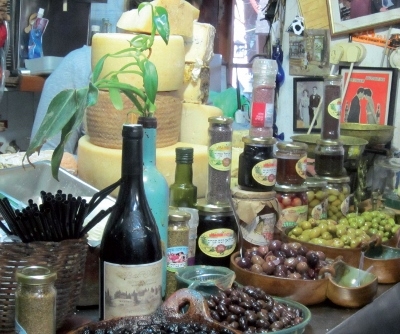 Because of the efforts of the Shwartzman family, Bat Shlomo was declared a national heritage site. This designation was not without controversy, because heritage status limits the alterations that can be done on the original structures. There is a small, but very special museum in the Shwartzman "shop," filled with valuable possessions. There are many photographs of the family and the way of life of bygone times, together with recorded documents from the Turkish and British eras. (The British replaced Ottoman Turk rule in 1917.)

Antique furniture, tools and household utensils are displayed, as well as family heirlooms, such as a beautiful 200 - year old samovar. The food served in the shop and outdoor area includes a selection of wonderful cheeses, hot pitas dipped in pure olive oil, olives and more - all home-made from the finest ingredients. There is also genuine Turkish coffee to top off your meal. Visitors can purchase all of their finest products, including special herbs, pickles, cheeses and even superb home-made wine. The cafe and shop are crowded on weekends.

After leaving Bat Shlomo, we climbed the modest 600 ft. Mount Horshan and began walking through the eponymous nature reserve, which has many natural oak trees and ancient structures such as the Tata ruins, water wells and an aqueduct. The waters of Ein Tut, a weak spring, flow through this reserve.

Herod the Great (74 BCE – 4 BCE), a great builder but an evil Roman puppet king, built an aqueduct from the stream along which we walked. Including other sources downstream, the aqueduct covered a distance of about 12 miles to Caesarea, Herod's magnificent port and capital city.

Moshav Amikam, our next stop, is a small, cooperative agricultural community established in 1950 by Jewish refugees from Harbin, Manchuria and Shanghai, China. Yemenite and Polish Jewish immigrants also settled on the moshav where some of the families work at raising peaches, plums, nectarines and loquats.

Together, the three communities of Amikam, Aviel and Givat Nili comprise the Alona Regional Council. Located on the slopes of the Carmel Mountains, this region was home to many right wing members of the Betar (youth) Movement and Etzel (a paramilitary force also known as the Irgun). These militant organizations followed the leadership of Zeev Jabotinsky and Menachem Begin, opposing British rule over Palestine. Givat Nili was established in 1953 by immigrants from Iraq, Turkey and Tunisia. It was named after the NILI spy group active during WWI.

Eventually we reached Nahal Tananim (Crocodile River), a stream that flows year-round, increasing greatly in velocity after the occasional rain storm. The water is crystal blue and there are lovely spots in the nearby nature reserve to relax peacefully and quietly. The water quality allows the existence of a variety of plants and animals. There were once crocodiles in the stream, but the last one was hunted in 1912.

This hike was made especially memorable by the truly beautiful scenery. Our group enjoyed the vistas, the camaraderie, and, of course, the picnic lunches we carried and ate al fresco.

We look forward to more mid-week hikes with ESRA (www.esra.org.il) in the fall.