Story and photos by Yael Meyer

"Kalaniot" (anemones) come in more colors than just red. I made this amazing discovery when I joined a group of ESRA day-trippers on a journey in February to the Lower Galilee.

At our first stop we were plopped in the midst of a field of pastel-colored anemones in the most unlikely place – adjacent to the Megiddo Private Airstrip. Indeed there were a few red outliers, but mostly we followed a winding path through a riot of pastel-colored plants.

As we drove on the Wadi Ara road towards the airfield, our guide, Beryl Ratzer, explained that we were following the battle route chosen by the Egyptian Pharaoh Thutmose III on his drive to conquer Megiddo, which was critical to controlling the way north. 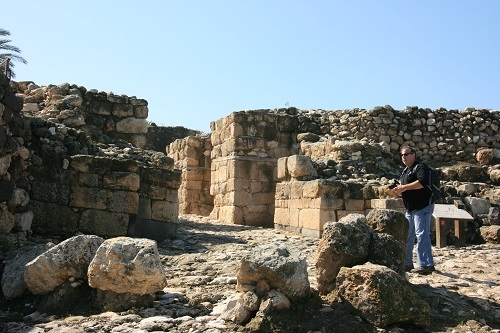 The route was one of three possibilities and was chosen because it was the most difficult and unlikely route, taking it gave the Egyptian army an important element of surprise.

The Megiddo site was of great importance as it guarded the western branch of a narrow pass and trade route (the Via Maris) connecting Egypt and Mesopotamia. When the Egyptian army got to Megiddo, they mounted a 7-month long siege to conquer the city.

At the Megiddo site we followed a path leading up to a reconstructed Canaanite gateway that consists of four chambers.

The reconstructed upper portion of the gate walls is indicated by wooden beams. From this gate we continued upward to the remains of an Israelite-period gate (once considered to be from the Solomonic era, but now thought to be of later origin).

We continued past the ruins of palaces and stables to an observation point from which we could look down on the excavation of two temples. One is clearly identifiable as a raised circular platform.

Further along the pathway we came to a reconstruction of what is believed to be a stable, helpfully identified by metal sculptures of horses and a chariot, and by water or feed troughs. 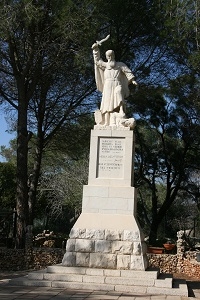 At the Carmelite monastery ... a statue and (Below) one of the attractive gardens 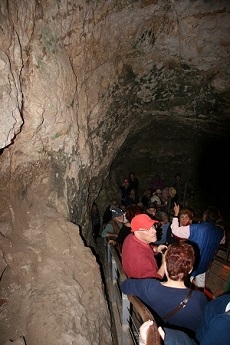 Inside the water tunnel

Our next stop was at the entrance to the site's most impressive construction: the water system consisting of a deep shaft and a horizontal tunnel dug through solid rock to reach a subterranean spring outside the city walls.

There is only a trickle of water today, the flow perhaps choked by subsequent earthquakes.

We descended the 187 steps through the shaft, crossed through the 70 meter long tunnel under the ancient city wall and climbed up 77 steps at the other end to meet our bus.

Megiddo is associated in Christian scripture with Armageddon – the site where the battle of the "End of Days" is supposed to take place between the powers of good and evil.

Our next stop was at the memorial to Isaac Ochberg in the Ramot Menashe biospheric park. A South African philanthropist, Ochberg traveled to Russia in 1921 and organized the transportation of children to South Africa where they were cared for.

Lydia Aisenberg wrote extensively about Ochberg and the memorial in ESRAmagazine #185.

It was then time to "chill out" over lunch at the picnic area of Givat Harakafot and then to wander up the steep hillside through a forest of beautiful cyclamens. 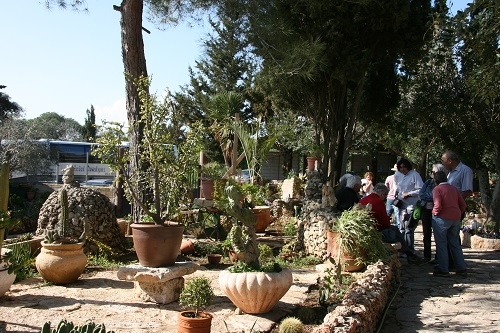 Our final stop, was at the Muhraqa Carmelite Monastery in the Carmel mountains near Haifa

Our final stop, was at the Muhraqa Carmelite Monastery in the Carmel mountains near Haifa.

Muhraqa is famous as the site of the sacrifice of Elijah the Prophet which took place in the days of the wicked queen Jezebel who sought to introduce Baal-worship into the northern kingdom after her marriage to Ahab, king of Israel.

Elijah took action to resist the persecution. He persuaded Ahab to assemble both people and prophets of Baal on Mount Carmel where he challenged them to a contest.

After their failure to invoke fire from heaven on the altar and his own success, the false prophets were seized and led down to the river Kishon where they were slaughtered. We were entertained by members of our group reading excerpts describing these events.

We then climbed up to the roof of the monastery to a 360˚ view of the surrounding area and of the statue of the Prophet.

The monastery also features a small chapel with an altar constructed of 12 stones to recall the 12 stone altar of Elijah.