Finding out About our Bedouin Neighbors 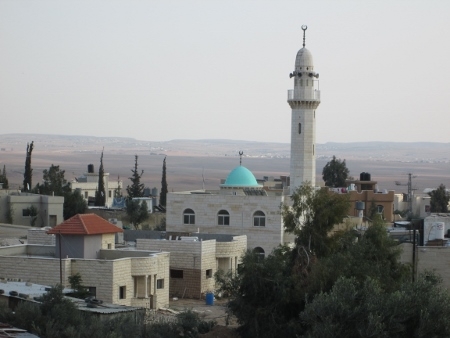 The old embraces the new: A solar-panelled mosque at the Bedouin agricultural village of Dirajit

As 2015 was ending, an adventurous group of ESRA bus trippers crowded onto a tour bus heading south to the Upper Negev. Our plan was to meet some of our Bedouin, Jewish and other neighbors in the south and experience their different cultures firsthand. 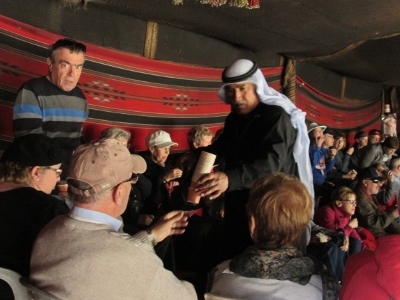 At the Joe Alon Museum of Bedouin Culture we learned from a local Bedouin guide that the Bedouins were descended from nomads. Their name means "desert dwellers" in Arabic, and they were traditionally divided into tribes or clans. They were herders of camels and goats, but now they have ventured into other endeavors. The museum exhibits portray their desert lifestyle. It features a full scale diorama of a typical family tent, with one section as a private area for the women and a second section featuring an open space for eating and entertaining guests. Following a precise tradition for greeting guests and negotiating business deals, they then serve and accept coffee or tea according to an explicit formula with specific meanings.

After touring the museum's exhibits of clothing, fabrics, saddles, dioramas of desert life and more, we went outside to the full-sized visitors tent where we heard stories and enjoyed tea. 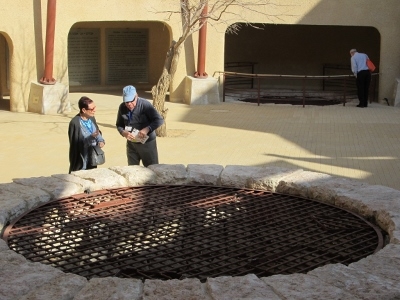 Taking a look at Abraham’s Well at Beersheba

While traveling to Beersheba, we saw the flourishing Bedouin settlements in the Negev. On arrival, we went to the newly renovated Abraham's Well International Visitors Center. It is an impressive structure built on the foundations of the courtyard of the ancient well and designed to resemble Abraham's tent, open to receive guests. After a brief introduction to verses from the Bible describing Abraham's well, we proceeded on a stylized "journey" to the theater which offers a 3-D presentation explaining the life and times of Abraham and the importance of the well and its water for desert life. My favorite part of the exhibit was walking up a hallway leading to the theater with one side depicting the nomadic figures and their camels and the other side a mirror image showing your group as an integral part of the caravan. In the courtyard, you can see the actual well. The top part of the well is lined with stones, probably from the Byzantine period, and the bottom part is cut into the bedrock. 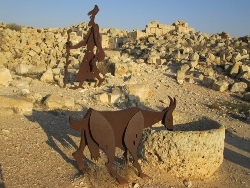 Our next stop was the Avdat National Park. At the Visitors Center we watched a film about the lives of the Nabateans. The park contains the ruins of an ancient Nabatean city situated along the Incense Route, the road over which costly incense, perfumes and spices were brought out of Arabia, across the Negev and to the Mediterranean ports. Life-sized artistic metal sculptures aided us in visualizing the lives of the Nabateans. The Nabatean ruins include a third-century guard tower with a Greek inscription over the entrance to the tower. Climbing the narrow staircase to the top afforded us terrific views of the surrounding desert. 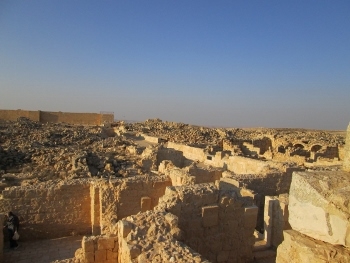 A view of the Nabatean ruins at Avdat National Park

Further on we found a Nabatean temple to their god, Oboda, which was eventually converted into a church. We also viewed the Byzantine period defensive fortress that included a complex system of channels and cists with crosses embedded in them. Many original finds were later destroyed by vandals and have been replaced with modern replicas.

One surprise was a picture memorializing a visit to the site by Prime Minister David Ben Gurion in April 1960. 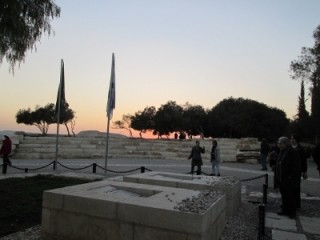 The Prime Minister at Avdat National Park in 1960

This find offered a natural segue to our final stop of the day – the gravesite of David and Paula Ben Gurion at Sde Boker. The resting place of Israel's first prime minister and his wife is situated in a lovely desert garden setting. Arriving at nearly sunset afforded us the opportunity to enjoy a breathtaking sunset view of the nearby canyons and highlands in the heart of the Negev. From here, our bus took us to Yerucham and our hotel for the night.

Waking early the next morning, I enjoyed the cold desert sunrise. After breakfast, we went on a brief tour of Yerucham, which has recently experienced a "rebirth" and an impressive, successful economic, cultural and educational development. 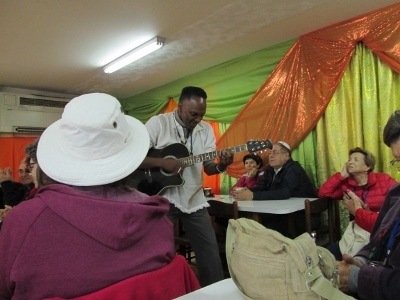 We continued on to Dimona where we met the Black Hebrews at their Village of Peace center. Black Hebrews (or African Israelites) believe they are descendants from the Tribe of Judah which was exiled from the Land of Israel after the Romans destroyed the Second Temple in 70 CE. Their recent ancestors were African Americans, who migrated to Israel via Liberia in the late 1960s.

Our guide for this part of the tour was Elyakim Ben-Israel, who became the first Black Hebrew to gain Israeli citizenship in 2009. Ben-Israel, their Minister of Spiritual Culture, is an inspired speaker who eminently represents his community. He explained their beliefs, history, aspirations and way of life. The Black Hebrews observe Shabbat and biblically-ordained Jewish holidays such as Yom Kippur and Passover. They officially allow polygamy, but do not actually practice it anymore. In accordance with their interpretation of the Bible, the Black Hebrews follow a strictly vegan diet, wear only natural fabrics, and do physical exercise at least three times per week. Their youths serve in the IDF.

They are renowned for their musical performances, and we enjoyed a short demonstration of their musical talent. We toured the village, seeing their exercise facility, the vegan bakery, ice cream and pizza shops and restaurants. Their desert gardens are inspiring for such a crowded space. Their matriculation rate is impressive. They have been allocated land nearby to enable them to move to a more spacious area where they will be better able to grow their crops and live in improved accommodations.

From Dimona we proceeded to the agricultural settlement of Dirajit. After lunch, tea and baklava, we learned about the history of this village and took a short walking tour with a guide from one the founding families. The village is unusual in the Bedouin community, having been established by farmers, as opposed to the original nomadic herders of the majority of the Bedouins. The village developed in spite of not being recognized by the government of Israel. 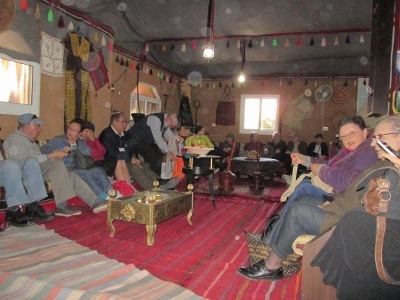 Dessert in the desert ... at Dirajit the Bedouin agricultural village

Our guide's family first lived in a cave hollowed out of the hill. We explored the interior of the cave which appeared relatively spacious, although not a particularly comfortable way to live on a long-term basis. Our guide was the only son in the family and was expected to marry at a young age. He found a wife and built a home, but unfortunately it was demolished by the government along with others in the village. Despite losing his life savings in the demolition of his house, his entrepreneurial spirit enabled him to push forward and rebuild his life.

The village was finally recognized by the government in 2004, but is still not fully supported by the kind of infrastructure that most of us take for granted. In 2009, the village was connected to the national water carrier, but still remains unconnected to the electricity grid. In 2005, the residents created a multipurpose solar electricity system for providing power to the entire village.

From Dirajit, we proceeded to Tel Sheva where we met a very special Bedouin woman entrepreneur. Taking an unusual path for a Bedouin woman she decided not to marry early, but rather to pursue a university education and afterwards to establish her own business. She left her family and her village to study marketing and business in the UK for several years before returning home. She said she would not have been able to do this without the support of her father in contravention of the traditions and beliefs of the Bedouin community. After she returned, her family wanted her to settle down and marry, but she insisted upon turning an unused garage into a factory and store, in which she produces cosmetic products using local herbs and old family recipes (oils, creams, and more). She now employs local women in her business, which is appropriately named Bat Hamidbar (Desert Daughter). Her products are sold locally and online. After sampling her products, we naturally proceeded to make purchases from the store.

As we headed back north, there was time to reflect on the many diverse neighbors we had met in two short days: Bedouins, Jews, Black Hebrews, entrepreneurs ; on the ancient cultures and the new; on villages, settlements, development towns, cities and ruins; and most of all on the amazing haunting expanse of the Negev. A place to return to!