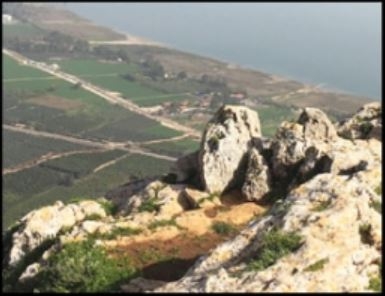 Mt Arbel in Israel’s Galilee region - view from the top

On a recent gorgeous winter day, I joined the ESRA hike to Mt. Arbel, one of Israel's most beautiful treks. We began at Moshav Migdal, near Lake Kinneret and walked a mile to the start of the Arbel ascent. Once on the trail, we reached the first of many panoramic spots with extraordinary views towards all points of the compass.

The almost overwhelming view was of towering Mt. Nitai, not our objective, named for a renowned 2nd century BCE rabbi. We could also see the famous "Horns of Hattin," not far away. There, a famous battle occurred in 1187 CE, when the Muslim armies led by the Kurdish general Saladin defeated the Crusaders. This led to the siege and defeat of the Crusaders, who controlled the Jerusalem Kingdom from 1099-1187.

The battle: During terribly hot weather, the Muslim army arrived from the east, wearing comfortable, loose-fitting clothes. In contrast, the Crusaders, who had come from the north, could hardly breathe and their horses struggled. The Crusader army wore the best European equipment, heavy suits of armor. Nor were the Crusaders adequately prepared for the terrain. Outmanned and outfought, most of the Christian soldiers retreated to the summit where they surrendered to Saladin's forces. This defeat ended the Kingdom of Jerusalem, the one and only non-Jewish kingdom in Jerusalem. (There was a second Crusader kingdom in Acre from 1199-1291.) 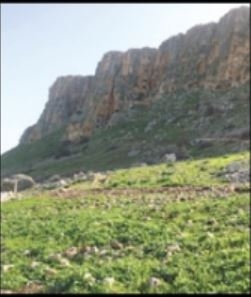 The scenery, including views of craggy Mt. Arbel and nearby Mt. Nitai, the Horns of Hattin, Lake Kinneret, the Golan Heights, and verdant valleys, is incredibly beautiful. The nearby cliffs resulted from the great tectonic upheaval which created the Jordan/Great Rift Valley, which is part of the huge geological fault that runs from Syria into Africa.

At about 1,100 feet above the Kinneret, which itself is far below sea level, our guide told us about many of the features below. Migdal, on the Kinneret shore, is named for a major 1st-century CE harbor. Miriam, a Jewess from Migdala, befriended Jesus and eventually became known as Mary Magdalene. The historian Josephus Flavius (a former Jewish general from Judea) reported that the Roman general Vespasian defeated the Judeans there in a disastrous naval battle in the year 67 CE. Vespasian was declared Emperor of Rome just two years later.

Nearby is Kibbutz Ginosar, a widely visited tourist spot, especially by Christians. It was founded in 1938. Situated on the Kinneret shore is the Yigal Allon Museum, which contains an ancient Galilee boat, known as the "Jesus' boat" because of its provenance, which dates back 2,000 years to the beginning of the Common Era. There are many other interesting exhibits as well. 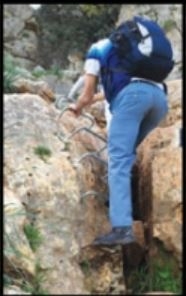 As we continued along the trail, we spotted a Roman siege camp built into the side of Mt. Arbel. During the Bar Kokhba Revolt of 132–136 CE, the stubborn Judeans withstood the mighty Roman Empire as no other subject people had dared. Jews inhabited caves in the mountain slopes and were a formidable obstacle for the Romans. Eventually, General Hadrian (later Emperor Hadrian) demolished all 50 Jewish fortresses and 985 villages and depopulated Jerusalem of its Jews. According to the Roman historian Cassius, 580,000 Jews were killed by the Romans. (Almost a third of the entire Roman army was stationed in Judea to finally defeat the Jews.)

I felt a bit nervous as we then hiked along a ridge which dropped off precipitously to our left. I kept well to the mountain side of the trail, which thankfully was relatively wide. Soon after, we began the final ascent up a steep, rocky terrain. The many metal handholds were essential for us to scramble up the ascent, which admittedly would be tame for experienced rock climbers.

We reached the summit of Mt. Arbel after several hours hiking and were rewarded with a well- deserved lunch break. Afterwards, we navigated the steep descent, which also featured handholds in spots. The outstanding feature of the Mt Arbel hike was the incredibly beautiful, verdant landscape through which we hiked. This winter has been wetter than usual. The result was that, at times, we imagined we were hiking in England or Ireland, such was the intensity of the colors. None of us remembered seeing such a lush green landscape, at least not in the last half dozen years.

This hike up Mt Arbel was a great combination of exercise, exhilaration, and enjoyment of the wonderful countryside of Israel's Galilee region.