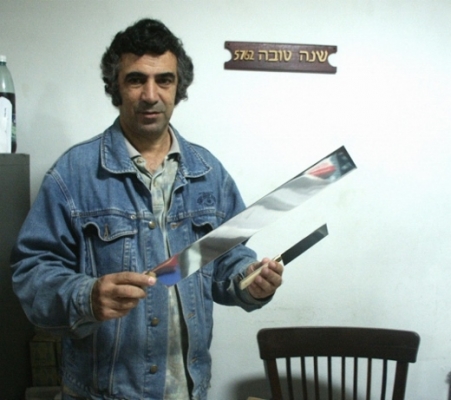 I had always wanted to visit Cuba since I was a revolutionary sociology student at Durham University, complete with Afghan coat and ethnic beads, attracted by the romance and idealism of Fidel Castro and Che Guevara.

Today, however, being a 'tourist' and definitely not a 'traveler', I need the reassurance of amenities such as running water and electricity. Once I had ascertained that Cuba has these – albeit intermittently – our plans were made.

For husband Charles, the first stage of any overseas visit is to obtain a list of local fish with the requisite scales and fins (thus kosher). The second is to find the location of any synagogues.

Cuba's fish list included the unlikely Muttonfish, Smelt – which they mostly did; Kingsish (probably a 'typo' in the Jewish Travel Guide) and Roballo and Pompano, sounding more like members of a Cuban football team.

Not unsurprisingly, Havana had the requisite two synagogues, both welcoming tourists who might be persuaded to bring in basic commodities. Everything was scarce and anything was appreciated.

Before departing, Charles telephoned one of the synagogues to ask what they needed and was told, "Shechita knives – one for beef, another for chicken." 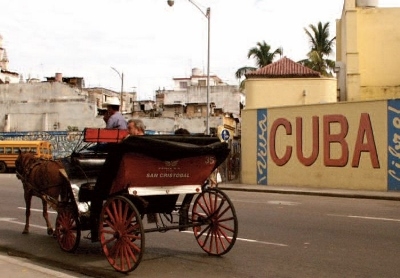 As shechita knives are not items purchased regularly in our household, and after confirming that John Lewis did not stock them, we decided to try our luck in Jerusalem. We assumed this would be a voyage of discovery, so it was a little disappointing to find that the shop which 'everyone' knew about was on Strauss Street, where knives were displayed alongside other essential tools such as those for removing stones from cherries, an item without which no self- respecting household should exist.

We arrived at the store. "We are looking for shechita knives" we ventured. "Fine", replied the proprietor, "would you like beef, lamb or chicken?" using precisely the same tone of voice as the air hostess on an El Al flight.

"Beef and chicken" we replied, whereupon he presented us with two flat ended blades – the larger being 24" long and 2.5" wide. An involuntary shudder at the sight of these confirmed my lifelong devotion to tofu, and the resolution to continue refusing to eat anything that has ever breathed.

We asked him to pack them suitably for travel, whereupon he wrote 'KNIVES FOR SLAUGHTERING PURPOSES' on the wrapper. As an afterthought, he added the word 'RITUAL' before SLAUGHTERING in the confident belief that this would ease our passage with customs officials in London, Madrid, Mexico, Miami and Cuba – the route the knives had to travel.

Everything proceeded without incident until Mexico, where we were asked to open our cases. You must understand that Charles travels with everything that can be removed from home without actually being unscrewed, so his luggage contents are impressive. 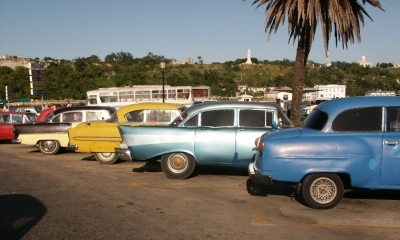 Distinctive . . . cars of many colors in Cuba

I spent the long flight rehearsing basic sentences in Spanish to explain the unusual contents of our baggage.

"We are Jewish, so we cannot eat meat or chicken unless the animal's throat has been cut so that it bleeds to death. This act is performed by a specially appointed ritual slaughterer."

These are not, you must appreciate, the usual phrases found in the 'Teach Yourself Spanish' manual. My Instant Phrase Book was great if I needed directions to the Cathedral, or wanted to order Huevos Revueltos (surprisingly scrambled eggs rather than revolting eggs). However, the shortcomings of the book became increasingly apparent as I struggled to explain the intricacies of shechita.

In addition to these weapons of slaughter, Charles' case contained 300 packets of antibiotics for the Jewish medical center in Havana. The moustachioed official, acting like Manuel in 'Fawlty Towers", opened Charles' case. At the sight of rows and rows of boxed pills, his expression was one of incredulity. His eyes widened; his eyebrows raised. He called his supervisor.

Charles turned to me, hissing, "Don't say a word!" I took a dose of Bach Rescue Remedy – useful in times of stress.

Images flashed through my mind of movies showing the horrors of Latin American prisons and here we were smuggling in not only lethal weapons but also drugs.

"What are THESE?" demanded the official severely. "They are mine", replied Charles coolly, assuming his most impressive legal stance. I desperately wanted to explain that Charles had a really very bad infection that necessitated taking antibiotics for the next 23 years, but resisted the urge.

The official, after conferring with his colleague for what seemed an age, cast a sympathetic look in my direction, shrugged his shoulders as if to say "Good luck with this unusual person" and waved us through.

It occurred to me in retrospect that Mexicans, being descendants of the Mayan culture that went in regularly for religious decapitation, were probably totally unfazed by 'slaughtering knives for ritual purposes' and may even have welcomed a revival of their age-old custom. 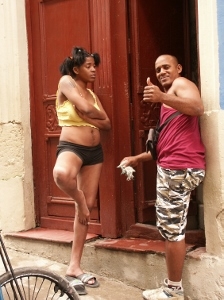 Thumbs up ... two locals in Havana

On entry to Cuba, we had to declare whether we had weapons or drugs of any kind. Charles completed the entry form declaring "Yes, I am carrying some extremely large and dangerous knives for ritual killing and also a vast quantity of drugs" – but no-one paid any attention, which convinced me that nobody ever reads these forms, and they were probably just designed to keep some clerk occupied at a desk job in Havana.

On arrival, our first duty was to take these clandestine goods to the synagogue. En route I wondered what would happen if we were mugged, and remembered the Crocodile Dundee film when, faced with a mugger in New York threatening him with a small knife, Dundee takes a huge machete out of his back pocket and says "You call that a knife!" I was quite prepared to recreate this scene, but disappointingly did not have the opportunity to do so.

So with everything ensconced in an anonymous plastic bag, and after furtively negotiating narrow rubble-filled dilapidated streets, we reached our destination. Here we were greeted like royalty with everyone wanting their photographs taken brandishing the knives.

It is always moving to visit small communities in distant parts of the world and to see how they heroically struggle to maintain their Jewish identity.

The members of the community told us about their lives. Compared to how we live in the West, they live in awesome poverty. A Jewish lawyer earned $8 a month, a doctor $12. Our taxi driver, a professor of Spanish at Havana University who had then become a diplomat for 16 years, now drove a taxi. He said that everyone had to take second jobs in the tourist industry to afford to buy food.

However, food was rationed – the monthly allowance per person was 8 eggs, 1 bread roll, 5 lbs beans, 5 lbs sugar, 6 lbs rice, 1 cup of oil, 4ozs coffee, ¼ of a chicken, and sometimes 1 kilo of beef. The synagogue received one cow a month, which hardly seemed to justify the shechita knives. Fish is rarely available, surprising, as Cuba is surrounded by sea.

Milk was only for children under seven or pregnant mothers. Fresh fruit and vegetables could be bought at a local market where one banana cost one tenth of the daily income.

For Passover the community received gefilte fish and matzo from Canada, but insisted on making their own kneidlach. Every morning at the orthodox synagogue, a free breakfast was provided for some 30 congregants. These same people then went to the Reform Shul where after mincha (afternoon service) they received supper. "This way", said the vice president of the synagogue, "we know that they are being fed". As with Jews worldwide, it is food that holds them together.

Following the 1960 Revolution, many Jews left for Florida, but some could not leave for whatever reason. 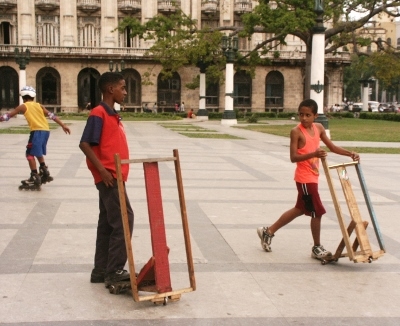 A few had relatives abroad who helped financially, but there were still those, particularly the elderly, who had to rely on the synagogues for help.

At one time the community urgently needed wheelchairs, but it was forbidden to import them. They devised an 'elegant' solution to resolve this by enlisting the help of three tourists who arrived in wheelchairs. Once in Cuba, the chairs were immediately occupied by three local handicapped Jews.

Some notable personalities had visited Cuba prior to our trip. Steven Spielberg was so impressed that he wrote: "When I see how much cultural restoration has been done it reminds me again of why I am so proud to be a Jew."

We also heard that a former Israeli Chief of Staff regularly visited an 'awfully important person' in Cuba. The latter would call the Israeli when he could not sleep and get him to tell stories to help him relax. A tale that had a certain biblical resonance!

Cubans we met were intrigued to know about Judaism, for they had little understanding of color or religious prejudice. Everyone spoke some English and was eager to engage in conversation – including one non-Jew who told us he spoke five languages including, curiously, Hebrew and Aramaic.

Life was certainly difficult for them in many respects, but at the same time the place was joyous. On every corner of the city you heard music. It was the first time I have ever seen an on-duty policeman dancing the salsa with a passer-by.

We were glad that we visited Cuba while it was still a McDonald's free zone, and we can't wait to go back before it changes.

■Ruth Corman's new book, 'Unexpected Israel', will be available from Gefen Publishing in December 2015. She writes a monthly column in the Jerusalem Post and her blogsite, ruthcorman.wordpress.com, featuring her stories, is now being read in 60 countries. 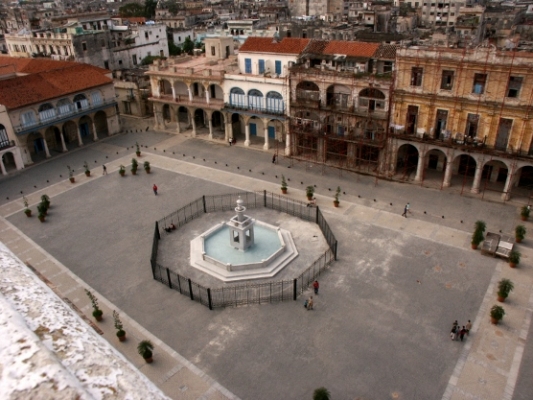 A square viewed from a Havana balcony
PRINT