A Story That Needs to Be Told 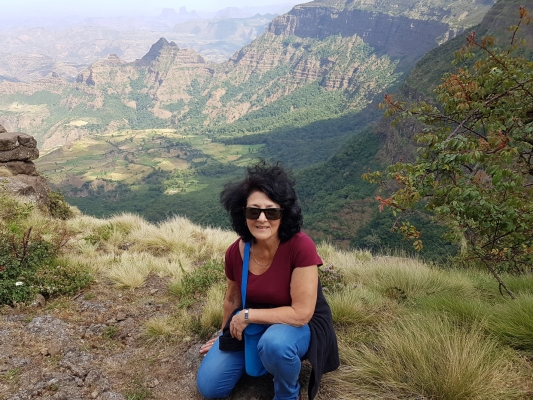 In 2004 there was an Israeli reality TV show called The Ambassador, in which contestants competed to enter the world of international diplomacy in the role of defender of the Jewish state. Ethiopian Israeli, Mehereta Baruch-Ron, was one of the outstanding contestants and placed second in the competition after Eytan Schwartz.

We regularly watched this program with its group of idealistic and talented young people – Mehereta being a shining example. During one of the episodes, she told the story of her journey to Israel. She was ten years old. She told of how they walked… walked!... out of Ethiopia and into Sudan, with virtually nothing. They only knew they must keep going, they must reach their destination. People dropped along the way, from exhaustion, from dehydration. I found her story extremely moving, if not shocking. Why did I not know? Had all the airlifted Ethiopian Jews who arrived in Israel with Operation Moses experienced something similar? And if they had, why did not everyone know what they went through to be here? The country was ill-prepared to receive these strange people, knowing very little about them, who they were, why and how they had come, and why they were so deserving of our respect.

From that moment in 2004, an idea took hold at the back of my mind… write a book. Tell their story. I imagined contacting Mehereta and recording her every word to write her biography. But as often happens, life got in the way and I never did try to find her or record her story.

One day, several years later, a poem crossed my desk. It was to appear in ESRA Magazine and I was asked to check the English. Looking at the Hebrew version, translated from Amharic, I felt the English could be improved and received the author's permission to do so. The author was Itzik Dessie, Israel's first lawyer of Ethiopian descent, who had also experienced the journey on foot, as had Mehereta. The poem left indelible images in my mind… "A burning sun on faces etched; Lips dry, split with thirst; Pangs of hunger in bellies drawn inwards, shriveled; As if stricken by plague, your souls are dying… I saw."

Now the idea became a need. I was determined to write this story, so that others will know.

Many of the participants in ESRA's education and welfare projects, especially in Netanya, are Ethiopian Israelis. Nina Zuck, ESRA Projects Coordinator, put me in touch with Avi Talala, who had made the journey himself as a small boy and was at the time Manager of the Heftzibah Community Center. Avi in turn put me in touch with members of the community I could interview, including a Kes, an Ethiopian religious leader. He also provided me with a book produced by the Netanya Municipality including over 50 brief stories of people who had made the journey. And I obtained Micha Feldman's book On Wings of Eagles containing many personal stories.

The interviews were amazing and moving, affording a glimpse into a different world, and a different mindset. I will never forget the answer to my question: "It gets cold in the desert. You had no sleeping bags or blankets. Weren't you cold?" After thinking for a moment how to reply, my interviewee answered, "We weren't cold. We had Jerusalem in our mind." That particular interview ended with me in streams of tears and my interviewee moved by my understanding of their experience. 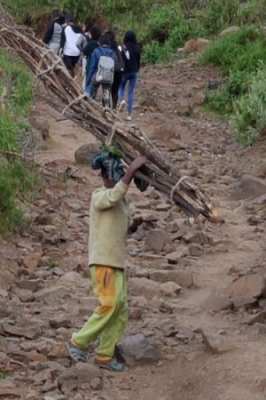 We experienced 1/800th of the path through Ethiopia to Sudan

I was incredibly privileged to join the wonderful ESRA project, Journey to Identity, bringing Israeli teens of Ethiopian descent to see the land their parents came from, connecting them with their own heritage and at the same time strengthening their Israeli identity. Nina Zuck, Cynthia Yaakobi and I were the team of trip mothers, or rather "saftot". It was an amazing experience, which I wrote about in issue no.198 of ESRA Magazine (and during which I learned to respect the directive, "don't drink the water"). Once I returned from the visit to Ethiopia in December 2018, I was ready to embark on my book.

I wanted people not just to know about the story, but to experience it. That was why I chose to make it a novel, allowing it to be far more up close and personal. But as I wrote on one of the book's opening pages, "This is a novel. The characters are imaginary. The events are real." All the major events described in the book are taken from real personal accounts. I also included an appendix with photos of interviewees and excerpts from my interviews.

Having completed my writing about the actual journey, I took a break. I wasn't sure where to go from here and how to end the book. Eventually it became clear. Their arrival in Israel is not the end of the story. Ethiopian Jews face a second, unexpected journey - the journey for acceptance in their homeland. Starting with a young girl and her family walking out of Ethiopia, and following her and her children into the next generation, my book is about these two journeys.

For online viewing or ordering of the book, print copy or Kindle, go to Amazon Books, and enter Mimi Tanaman in the search box. Mimi's books will appear: Ascending, Lost & Found, and two children's books in rhyme, translated from Hebrew.