A Day of ‘Firsts’ 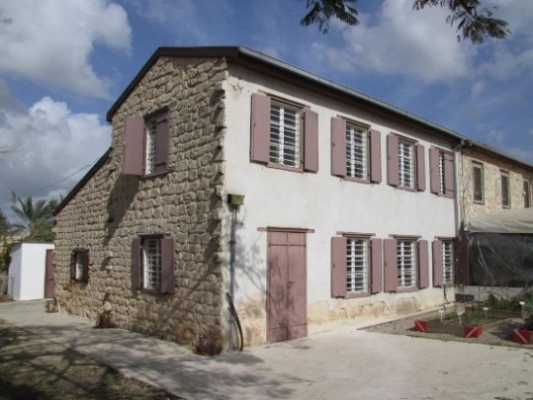 An original house at Mazkeret Batya.  Photos by Linda Glaser and Yael Meyer

On January 28 a busload of intrepid ESRA day-trippers traveled south to the Rehovot area to visit three sites offering a cornucopia of views of early Israeli Jewish settlement and enterprise in the once sparsely settled landscape. It was a lovely winter's day with threatening clouds that didn't rain on any of our outdoor adventures. 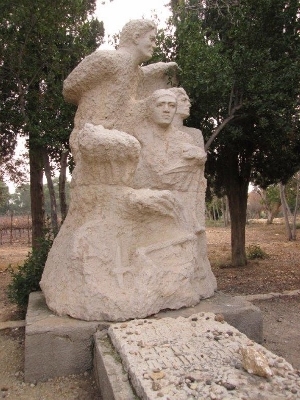 A sculpture at Mazkeret Batya

Our first stop was at the Hulda Forest with its "Herzl House" built in memory of the man who inspired the establishment of the first KKL-JNF forest in what later became the state of Israel. Herzl himself never set foot in the area. The story is that he saw the then open land while passing on the train from Jaffa to Jerusalem, and suggested that it would be a nice place to plant a forest. This offhand remark seems to have been enough to get forestation started.

In 1905, the Anglo Palestine Bank purchased the site from the Saidun tribe, and the KKL-JNF redeemed the land from the bank for the establishment of a settlement. In 1909, an agricultural farm was established on the land. It was named Hulda. A forest was planted, and the Herzl House building served as the residence of the manager of the farm and later of the Hulda forest workers. The first trees planted were olive trees, because the Olive Tree Donation Society donated the money for them. However, the land was not really suited to olive trees, and they ultimately had to be removed. While the original goal was to plant fruit-bearing trees, the land is more suited to what are considered by some to be "junk trees," but are trees which can thrive on this site and which provide a lovely forest setting for picnics and outings. 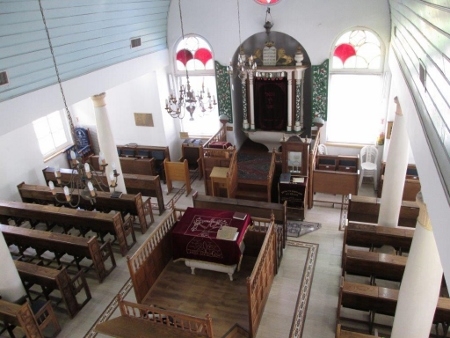 Both angles ... the inside and the outside of a synagogue at Mazkeret Batya 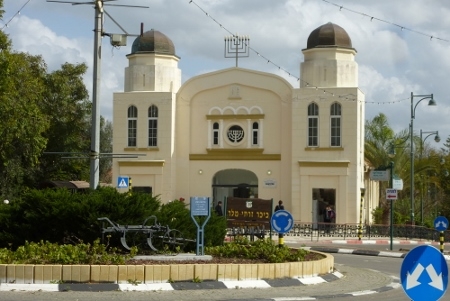 During the 1929 disturbances, the farm was attacked by Arabs and destroyed. Although the fighting was fierce during the battle, the settlers continued to defend the settlement, and eventually British forces evacuated them. During the evacuation, the British did not allow the settlers to remove the body of Ephraim Chizik, the Haganah commander who was killed during the battle. An inspiring memorial sculpture commemorating Chizik (whose sister was killed defending Tel Hai), sculpted by Batia Lichansky, is located at his gravesite.

Herzl House was renovated in 1996, and a donation by John Sereny of Toronto, Canada, made possible a small museum with audio-visual exhibits. The site contains a trail that directs visitors through the forest between various marked sites. The forest is a national park and it is maintained by the KKL-JNF.

Our next stop was the quaint historic village of Mazkeret Batya. The story of Mazkeret Batya is one of Zionism at its best. While little is known even to Israelis living in the center of the country, the town is a gem well worth a visit. It also deserves recognition for being the first site of commercial cultivation of wheat and millet in this area.

In an early attempt to introduce Jewish farming in Palestine, the village was established in 1883 by 11 pioneers from the region of Pavlova in what is currently Belarus, They were recruited by Rabbi Shmuel Mohilever who was the emissary of Baron Edmond James de Rothschild. The Baron imposed two conditions for his support:- that 10 men agree to establish the settlement and that they establish a working farm within two years. The settlers demanded support for 11 men to ensure the existence of a minyan. The settlement was originally called Ekron and was the first agricultural settlement of the Hovevei Zion movement. In 1887 the name was changed to Mazkeret Batya, in memory of Betty Solomon de Rothschild, mother of Baron de Rothschild, after his visit to the village. The economy of the village was originally based on dry farming.

During the Mandate era, a Jewish police station was established in Mazkeret Batya to safeguard the local roads. In the War of Independence, convoys to besieged Jerusalem left from Mazkeret Batya. A field hospital operated there to care for Haganah fighters wounded at Latrun.

We saw the very interesting historic sites which are well preserved for visitors. These include the first homes of the settlers (where the rock and lathe construction of the walls can still be seen along with many construction tools), the blacksmith's shop (with working machinery, early plows and similar forged items), the cowshed (with early planting and animal husbandry items), the functioning water- wheel and wells, the historical museum, and more. Around the central area, many examples of artistic metal sculptures using old objects can be seen, as well as the old red British style telephone booth and an elaborate birdhouse.

The real gem of the town is its synagogue, which was designed by architect Pinhas Nit. 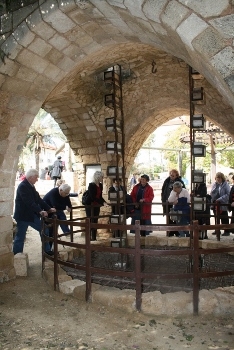 It was built almost 100 years ago and is located dramatically at the entrance to the center of the town. The building is reminiscent of synagogues in Europe with towers on the sides – almost as if it had been brought in from Poland, but with a local flavor. It is a beautiful building with a design mirroring the end of the 19th century. While intended to cater to all the ethnic groups, its worship service follows the Orthodox Ashkenazi way with a balcony upstairs comprising the women's section.

After a lunch stop, we ended the day at the Minkov Citrus Orchard Museum and Learning Center. Here we were able to experience and understand the first citrus orchards of Israel which formed the basis of the commercial success of the early Jewish settlement of the state. The site portrays the planting of the first orchard in the Rehovot area by the Minkov family in 1904 and shows how citrus orchards were planted, harvested, packed and shipped abroad.

The original facilities and activities of the grove were restored, and include citrus trees, a fruit packing facility, an original external combustion engine water pump, the irrigation reservoir and aqueducts, the owner's residence, and rail carts that transported the fruit to the packing facility. We were treated to a tour which included an introductory film, the reproduction diorama demonstrating how the fruit was sorted, individually wrapped in paper and packed into wooden crates at the packing-house. When the crates were full, they were sealed by a carpenter and transported on camels to the Rehovot railway station. The orchard was known for employing only "Hebrew labor" at a time when such a thing was unusual.

The visit ended with a walk through the orchard where we got to learn about, pick and enjoy varieties of oranges, grapefruit, lemons, pomelos, kumquats and more.