Who helped shape the birth of our nation 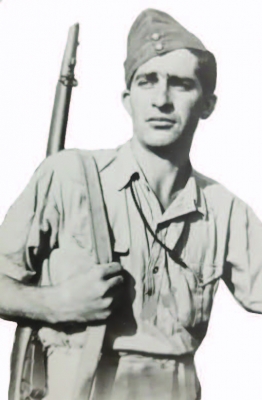 Photos from the private collection of Noga Gibbs Brenner

I have known Noga Gibbs née Brenner since she settled in my hometown of Glasgow, Scotland in 1986. Noga grew up in Kibbutz Afikim, the daughter of Zvi and Ruth Brenner. She later moved to Kibbutz Kfar Giladi and from there to Glasgow. Since she made Glasgow her home, we have become good friends; however, I knew little about her early family life. It was only over a recent lunch in our Netanya apartment that I first heard the amazing story of her late father, Zvi Brenner, as told in his 1993 biography, A Common Soldier by Yosef Eshkol.

I was intrigued by the story of Zvi which reflects the story of pre-state Israel. So much so, that in the short time since I have heard of him, I have been able to use his story as a tool in my work as a tour guide.

While there are many throughout this country who could tell a similar story, this is the history of an unassuming man who never sought glory, but did what was asked of him and stood by those who went on to shape the nascent State. His life reflects the whole panoply of Israel's struggle for rebirth.

Born in Siedlce, Poland, in 1915, Brenner immigrated with his mother and siblings to Chicago in 1922. Having gone through the Zionist youth movement Hechalutz Hatza'ir in both Poland and the US, Brenner's destiny was clear. At the age of 16 he joined a Hashomer training farm and in 1934 received a certificate, allowing him to enter British Mandated Palestine. Landing in Haifa on October 30, stated by him to be "the most important day in my life," he joined the new Hechalutz kibbutz of Afikim.

While working in Afikim, Brenner was initiated into the Haganah where he carried out drill and guard duty and learnt how to handle a rifle.

In 1938 Brenner was one of two members "volunteered" from Afikim to join 400 others to establish Kibbutz Hanita, designated to bolster Nahariya, the only Jewish settlement in the north. He remained in Hanita for several months defending the new settlement against constant Arab attacks. In his biography he describes the hardships in establishing this tower and stockade outpost, so essential in marking the northern boundaries of the future State of Israel. It was while at Hanita that he first met his wife to be, Ruth.

While there, he also met Captain Orde Wingate of the British army, an intelligence officer assigned to Palestine in 1936. Orde was religiously motivated, viewed the Jews favorably, and quickly established relations with the leadership of Jewish Palestine. It was to help the Jewish endeavor and to ensure they were defending themselves properly that Wingate turned up in Hanita with lots of weapons. He taught the Jews how to scout the area at night. "Going out beyond the perimeter" was a revolution in the very perception of the Haganah. During this visit, Brenner was appointed Wingate's personal escort, a role he was to fill throughout Wingate's time in Palestine. The two men became good friends.

Shortly thereafter, Wingate established his Special Night Squads in response to the Arab riots and their nightly attacks on British outposts and the vital petroleum pipeline from Iraq to Haifa. The Night Squads comprised platoons of British soldiers and members of the Haganah who went out to gather intelligence and actively prevent attacks. Brenner became the Jewish Officer of the platoon operating out of Afikim. This was the first time the Haganah had taken on anything other than a purely defensive role. Wingate instilled in the Jewish fighters his unconventional tactics and military leadership ideas. Brenner is quoted as saying of him: "He taught us everything we know." The Special Night Squads were hugely successful in securing the pipeline.

Wingate's main aim was the formation of a Jewish army. In September 1938 he ran a course training Jewish officers, the first of its kind. However, a change in British policy towards Arab appeasement, saw Wingate relieved of his command of the Special Night Squads and sent back to British HQ in Jerusalem. There was to be no further training.

Brenner was formally assigned by the Haganah as Wingate's bodyguard. Brenner described Wingate as a Zionist and "almost a Jew." By early 1939, hated as much by the British High Command in Palestine as by the Arabs, Wingate was sent back to England. During the war he served in Ethiopia and then as a Major General in Burma where he died in action in 1944.

In November 1938, the British abandoned the Peel Commission partition plan in a further appeasement to the Arabs, whereupon the Haganah clandestinely started their own officers' training courses. Brenner joined one at Yavniel of which Moshe Dayan was an instructor. After a British raid it was decided to transfer the course to nearby Ju'ara and it was while moving location in the middle of the night that the 43 participants, including Dayan and Brenner, were arrested by the British Border troops and taken to the formidable fortress at Akko. Here, Brenner was interrogated and severely beaten. During this period of incarceration in Akko Brenner and Dayan became close friends.

At their trial Brenner and the others were found guilty and sentenced to 10 years. Conditions in Akko were grim, with some 800 Jewish and Arab prisoners incarcerated together. Visitors would stand on a stone ledge and shout over the fence to the prisoners. Brenner's girlfriend Ruth would visit him, as did Dayan's wife, Ruth. They affectionately became known as the "two Ruths," standing side by side on the stoop shouting over the fence while visiting their menfolk in the prison courtyard.

Brenner's sentence was first commuted to five years and then on February 17, 1941 (having served 18 months) he was granted a pardon following the intervention of Wingate. Brenner returned to Afikim, married Ruth and once again began working with the Haganah, training field troops in the Jordan Valley.

With the outbreak of World War 11 and the collapse of the front in Greece, the Haganah established the Palmach, a strike force, to counter possible German invasions from the North and South. They prepared a defensive plan - the Carmel fortification. Brenner, opposed this defensive plan and advocated joining the British army and fighting Rommel in the South and in a rare case of disobedience, disregarded Haganah orders, and enlisted in the British infantry. For those Jews enlisting, there were two goals (i) to fight Germans and (ii) strengthen the Haganah by acquiring military knowledge and arms. Brenner was soon promoted to the rank of Sergeant. While continuing to train he was at the same time stealing arms and transferring them to the Haganah. It was at this time that Ruth gave birth to their oldest son, Eli.

In September 1944, the British finally established a Jewish Brigade comprising three Jewish infantry battalions including Brenner's unit. In October 1944, Zvi was transported by ship to Italy, where he realized his dream of confronting the Nazis face-to-face in the field of battle. After a short training period his unit started patrolling the front and while on an operation to take a village evacuated by the Germans, Brenner was ambushed and hit by a German grenade.With a seriously damaged leg, he managed to crawl into a canal from where he was loaded on to a jeep and driven to a field hospital where an Australian doctor operated and saved his leg.

The Jewish Brigade in Italy went on to play a major role in organizing Jews who survived the Holocaust, smuggling them across borders to Italian ports and sending them to Palestine in illegal immigrant ships. During the war some 30,000 men and women of the Yishuv served in the British army swearing allegiance to the Crown, whilst their true allegiance was the Zionist cause. The knowledge and arms acquired during their service contributed to the War of Independence. On the day before Independence Zvi Brenner lit a torch at a ceremony on Mt Herzl as a representative of the Union of Demobilized Soldiers.

Zvi had been wounded on March 21, 1945 and while in hospital in Bari he received a telegram that a daughter, Noga, had been born that day. The day before Rosh Hashanah 1945, he was allowed a one-day visit to his home in Afikim and realized that life for him would never be the same. A few months later he finished his treatment but still had mobility issues and had to adjust to his limitations. 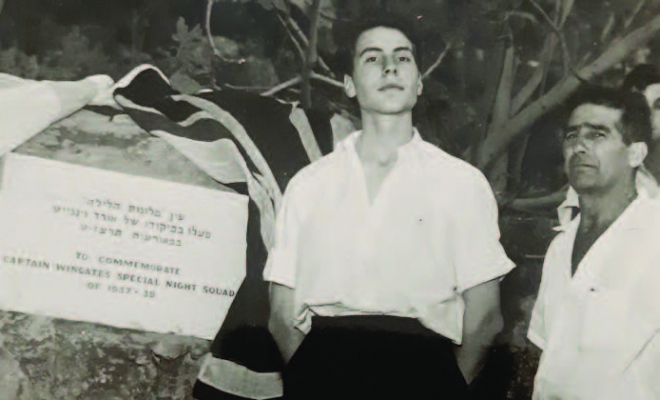 After a lengthy recovery Brenner was appointed chief instructor of the school for Haganah officers near Netanya, a role of considerable importance and responsibility.

The announcement of the UN partition plan on November 29, 1947 was received with mixed emotions. While there was tremendous joy, there was concern for the future and preparations were undertaken at Afikim, in the front-line Jordan Valley, for the inevitable Arab invasion which came the day after the State was declared. At the same time the British freed the illegal immigrants who had been interred in the camps in Cyprus. It was Brenner's role to enlist the illegals who poured in to the new State in the new IDF. Immediately after Independence Brenner was sent on a mission to the US to seek out people and arms. With a makeshift passport issued by the new state, he flew to Chicago via Brussels and Prague. He was given three days compassionate leave for a reunion with the family he had not seen for 14 years. From there he flew to New York for his first fundraising luncheon at the Waldorf Astoria where he was the guest of honor and was introduced by the former US Secretary of the Treasury, Henry Morgenthau, as a "hero of Israel." That luncheon raised $1m and was the first of many arranged by him and Teddy Kollek.

Brenner and Kollek were raising money for the acquisition of weaponry and war surplus military equipment, which was clandestinely smuggled to Israel contrary to the then US embargo. They purchased and transported all types of arms, planes, and naval acquisitions (including a shipment of 90 armored carriers). They even made an appeal to recently demobilized Jewish soldiers to donate personal weapons they had been allowed to keep as souvenirs after the war. They recruited US pilots to bring over planes bought from Czechoslovakia and encouraged trained pilots and soldiers to join Machal - Volunteers from Abroad - to fight for Israel.

After a few months Ruth, Eli and Noga, joined Zvi in the US, living initially with Ruth's sister in Boston and then joining him in New York where he still had a very heavy workload.

On May 11, 1949 Israel was accepted as a member of the UN and Moshe Sharett made the acceptance speech. Zvi Brenner was in attendance to see the Israeli flag hoisted alongside the flags of all the other nations of the UN. After Israel was accepted into the UN the situation in the US was easier and there was no longer a need for clandestine operations. Brenner had a strong desire to return home to kibbutz life in Afikim. On his return he was promoted to the rank of Major in the IDF. 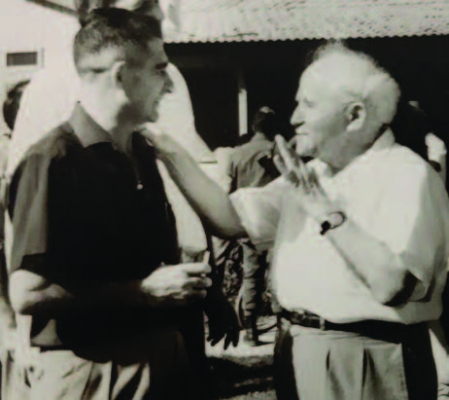 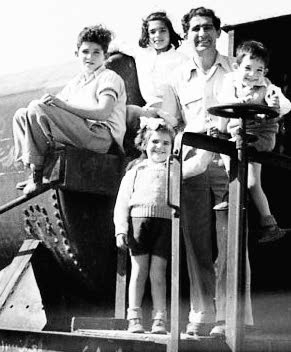 Family man ... Zvi with his children

In August 1949, Zvi and Ruth had twins, Ran and Rina and for the first time Zvi was able to participate in bringing up his children. While over the years David Ben Gurion and Golda Meir tried to persuade him to return to the US or take up ambassadorial positions abroad, he was adamant that he wanted to stay in Afikim where he served in various capacities within the kibbutz and as Secretary of the Kibbutz Movement.

In the ensuing years Zvi and Ruth Brenner counted David and Paula Ben Gurion, Moshe Dayan, Yigal Allon, Yitzchak Sade, and Golda Meir among their close friends. Zvi Brenner was a leader of Kibbutz Afikim until his death in 1999.