With Spring comes Purim then Pesach 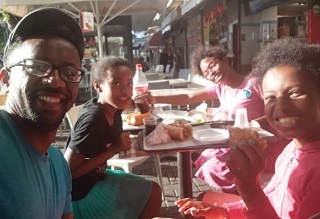 Purim fun and getting ready for Pesach...with our SBC student in Netanya

This entry was prepared by one of our students from Students Build a Community in Netanya. His accommodation scholarship from ESRA enables him to work with his four elementary aged pupils. (Translated by Judi Argaman)

The moment between Purim …

During the "Purim Happening," the Purim atmosphere prevailed in the Heftzibah neighborhood of Netanya. It was joyful with plenty of movement and action.

The children were all dressed up in various costumes, jumping around, running wild and were simply enjoying being children. Among all the adults, we felt we genuinely needed the children for this celebration--children who will run with the students and the neighbors, children who will revive the small paths between buildings… and children who will continue to laugh, even when not everything is funny.

The community center operated Purim games stations, where the children awaited their turn patiently. The adults were also expecting the children to bring the party to life. The children who were technical "experts" accepted the mission, and alongside the machines and games and inflatables, they revived our whole neighborhood. Their playfulness was necessary, because we, the grownups, have forgotten how to play.

So, in a simple manner, the children of Hefzibah with their innate abilities of creativity and playfulness, have turned the neighborhood into a fertile ground of spontaneity, on which all the residents of the neighborhood can walk with pleasure and enjoy the festive atmosphere with friends and family.

… And the Pesach preparations

All the houses in the neighborhood undergo a thorough cleaning, penetrating even the darkest corners that no broom or cleaning tools have reached in a while. Even places that have been cleaned needed to be refreshed and cleaned once again.

On one of the week days, I took "my daughters" (the project students, as I call them) to the activities they wanted: a fun day at the beach and then eating at a busy place - one of the commercial centers in Netanya's city center. The girls were equipped with a bag that included a towel, a change of clothes and a bathing suit. But they had something else to put into the bag: a serious supply of strength, energy and good spirts, to make the day and the activity as fun as possible.

When we got off the bus and made our way to the promenade and then to the beach, the girls marveled at the summer atmosphere that was present in the streets of the city center. You could feel the atmosphere's influence on the girls' smiles, the way they laughed with pleasure and spoke with a lightness that was like a fresh breeze on a hot summer day. The sea also felt the girls approaching and their mothers' concern, even before we went to the water and it was as though we were trying not to be angry or mean and to control the waves so that they could wade in the water.

As much as I tried to enjoy the activity, I found it very difficult. It was mainly because I knew that for them to enjoy the sea, I had to make sure everything was going well, especially the girls' safety. So my eyes did not leave them for a moment. So much responsibility--mainly because of the parents' fears and concern, even though each parent had given their written consent. It is not simple to commit to taking the girls, with all the caution in the world, to the sea and to tell them that the sea, which is sometimes perceived as frightening and threatening, actually comes to serve them properly. I made a great effort to make sure that the girls would not feel the fear I felt naturally and I think that at the end of the day they managed to enjoy themselves without fear.

How do I know? Because they smiled, laughed, quarreled with each other, made up, ate, and finally returned home safely.