Why I Took up the Guitar at 50

"I married a chartered surveyor and now I'm living with Jimi Hendrix," is the phrase my long-suffering wife is wont to repeat over and over again, as the sound of Hey Joe comes blaring out of my electric guitar attached to my amplifier in my office in our apartment in Raanana.

How did it come about that someone who worked in a mainly conservative profession all his life took up the electric guitar and now plays in a heavy-duty rock band?

Well, I suppose that the stock answer is - midlife crisis. But not for me fast cars and even faster women. Growing up (although I've never really done that), I always wanted to be a rock star, emulating the heroes of my "yoof "- Jimmy Page, Eric Clapton, Jimi Hendrix, Keith Richards. But when I was in my teens I knew some excellent guitar players and, somewhat lacking in self-confidence, I thought that I would never get to their level, so I gave up even trying. 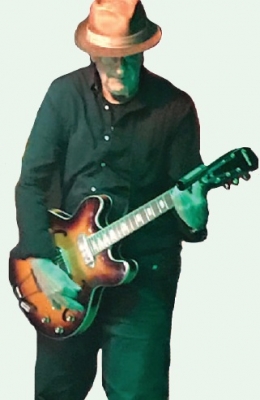 Guitarist Laurence Lebor in action at a gig

But soon after I turned 50, I saw an advert for guitar lessons - you know, one of those bits of paper stuck to a tree where you pull off a phone number. Turned out to be a kid of 17 living nearby. He taught me some chords, some scales, some songs, and of course how to play Stairway to Heaven - every guitar shop's nightmare. Then of course one day he announced that he was joining the army, so that was that. I was on my own.

So I took the plunge and joined the Bama music school in Raanana, thinking I would be the only old bloke there. Not a bit of it. The school is full of old blokes like me who thought they would be the next BB King but never got round to it. My teacher turned out to be an expert guitar player nearer to my age, who knows all the old Clapton licks, has an encyclopedic knowledge of The Beatles, and loves the blues. We were a match made in heaven.

My next step was to go full-on electric, so I bought the Fender Strat and the 50-watt amp, and turned the volume up. The music school had an in-house band, mainly Israeli youngsters who only knew current day music, and had never heard of the Rolling Stones, believe it or not. So that wasn't for me, and I decided to form my own band together with my teacher. We've been playing for about five years now, with a bass player, drummer and great singer. The other guys are quite a bit younger than I am, and are usually unimpressed with my insistence on playing nothing written after 1975, but we generally get along with a mix of blues, rock, R&B, and pop.

One of the useful things about learning a musical instrument later in life is that it helps your memory. Playing in a band means you have to know how to play the song, remember the words and sing it as well. Sort of multi-tasking.

Of course the main reason for forming a band is to meet chicks. You know, groupies who hang around the stage door. Yeah right! But recently, after we finished a gig, this blonde girl came up to me and asked if she could come home with me. Of course I said yes, and she was still there in the morning. But when she told me to get up, get out and go and buy the challot for Shabbat, I knew the dream was over.

Anyway, the band is Rough Edge, and we're available for parties and gigs. Just remember your ear plugs. If you want to hire us please get in touch with me, Laurence Lebor, on 054 465 2179.Enter your text here ...