When Language Can Smash ‘Barrier’ 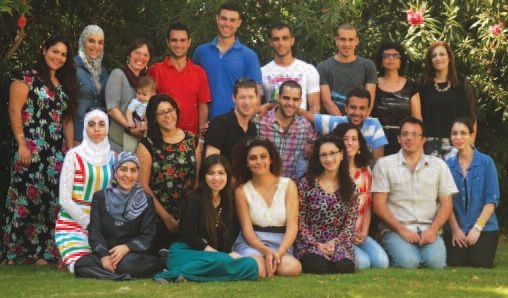 A.M.A.L. students on a training seminar

When Jewish youngsters hear Arabic spoken in the street or on the bus, their reaction is very often unease and fear. "Terrorist" is the instinctive thought. Because the language is not understood, the gap between the two peoples who live in this land is widened, rather than breached.

Three young people, Ishmael Ben-Israel, Roi Silberberg and Noga Zohar recognized that language is a key to changing perceptions and stereotypes. If children knew some Arabic, they believed, they would look at those who speak it as ordinary people, rather than as enemies.

And so, five years ago, they founded the registered non-governmental organization A.M.A.L., (the Hebrew acronym for "Spoken Arabic for All") in order to expose Jewish school children to Arabic and to Arab culture in the best way possible. "Most people in Israel don't have a meaningful connection to Arabs," says Ishmael. "This is a way to help create a more tolerant society."

Though Arabic is taught in Israeli schools, it is literary, rather than every-day Arabic, which doesn't really have much practical use. "It's as if people were taught to speak the Hebrew of Agnon instead of the language of the street," Ishmael explains. Moreover, it is often taught by Jewish teachers who are not native speakers of Arabic and it is not a compulsory subject. It isn't taken very seriously, either by teachers or students.

A.M.A.L.'s approach is different. The program is aimed at elementary school children rather than those in higher grades, because the younger you are, the easier it is to learn languages, and because prejudice can be best countered at a young age. It is taught in a way the children can enjoy, through songs and games, by dedicated Arab university students.

From the point of view of the Arab student teacher/mentors, the program offers a chance to be accepted as equals in a Jewish school with professional and personal support, as well as to earn scholarships to cover part of the cost of their own studies. It is an empowering achievement.

In other words, A.M.A.L. is a win-win situation.

I recently attended a meeting at the home of Ester and Louis Beck to learn about the work that A.M.A.L. does, and was heartened and inspired by these idealistic, highly-motivated young people. In these difficult days when the gap between Jews and Arabs is greater than ever, it is heartwarming to hear about a model of interaction that really works.

Five years on, there can be no doubt A.M.A.L. has been a success. One student teacher, Alaa Haj Yahia, showed me the notebook that her students had written as a farewell at the end of the school year.

"You are the nicest." "I love you!!!" "I am so sad this is the last lesson" – these were some of the remarks that children had written. If that isn't success, what is?

This is how it works: Arab students at Israeli universities attend seminars to provide them with relevant teaching skills and are then assigned to schools. This year, the program involved some 400 students in 4 schools in the Tel Aviv-Jaffa area, with 11 teachers who teach classes 4 hours a week each. The organizers are a small team of volunteers, while the teachers, through the university "Perach" mentoring program, are given scholarships of NIS 5000 each for the year. The budget is raised by donations. Plans are to expand to 16 schools with 48 teachers within the next few years.

It has not always been easy for the teachers. Abeer Omari, a third-year law student at Tel Aviv University from Nazareth, who was mentor/teacher last year and this year is project coordinator, recalls that the suspicious guard at the school gate gave her a hard time when she came to the school for the first time. Also, the principal was less than encouraging because she believed the program wouldn't succeed.

"The students could choose from French or Arabic, and eventually, all the French students dropped out and joined our class. The kids said they wanted to learn Arabic because it was the language of our neighbors, and that inspired me to come to teach on my one free day," says Abeer.

Rasan Gosh, a TAU medical student from Kafr Manda, found the unruly atmosphere in school to be challenging. "Students didn't pay attention in class and I wanted to stop. Also, there were misapprehensions. When I said I wanted to teach about Arab culture, one response was, 'What culture'? It was funny, but sad. But eventually, I learned that I like to teach. I gained confidence."

According to the founders of the program, "Our vision is a more tolerant and open-minded Israeli society in which Jews who don't speak Arabic are the exception, not the rule. We see ourselves as citizens of a modern, liberal society, in which Arabic and Hebrew, as well as Arabs and Jews, live side by side in peace and common respect."