Whatever happened to Gush Katif? 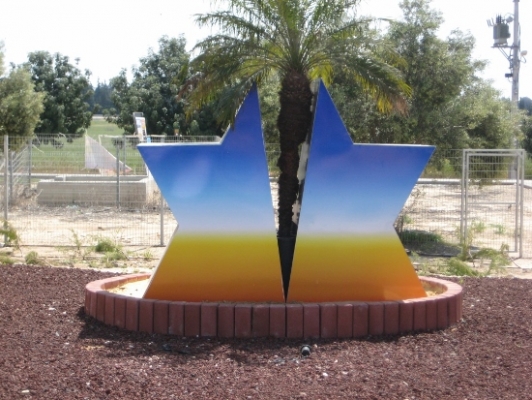 The symbol for the Gush Katif center is a large Magen David that is split down the center with a palm tree growing out of it. The names of all the communities are written on its side

We signed up for one of She'arim's Russian Outreach Program's wonderful trips to a place we likely wouldn't get to by ourselves - the Gush Katif and Northern Samaria Commemoration Center, a new exhibit located in the northern Negev not far from the Gaza Strip. The Nitzan Visitor Center had opened only two weeks before our visit. Our young guide had lived in the Gush with her family for 13 years (from age 5 to age 18), since their aliyah from the U.S. until they were evacuated. Her formative years were spent in a community that the late former Prime Minister Ariel Sharon had at first believed should be settled, and then decided should be "disengaged".

In 2005, the Israeli government under Sharon in a unilateral effort to push for peace with the Palestinians, decided to vacate the Gaza Strip, one of the disputed territories of which Israel got control in the 1967 war. This entailed evacuating everyone living there: in 2004, 8,693 people lived in 17 communities in the Gaza Strip, according to the Gush Katif Center website (www.mkatif.org). Jews had lived on this land before 1948 and were forced to leave in the War of Independence, so this was the second time Jews were to be banished from the area. 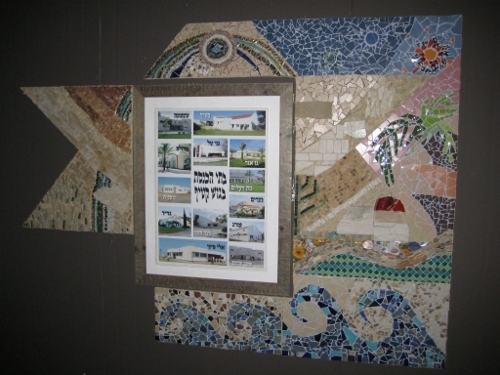 On display in the Gush Katif Center . . . a mural made out of stone fragments from every synagogue in Gush Katif that incorporates a poster showing photos of every one of them

No matter which side of the political spectrum you are on, this was one of the most difficult things that Israel has ever had to do. The Israeli army was used to carry out the plan, and young soldiers, 18 to 21 year olds for the most part, had to evacuate families from their homes, bulldoze the homes, destroy their livelihoods, synagogues and neighborhoods and uproot their cemeteries. I had watched what was shown of it on television in the U.S. and saw some films of the disengagement at a museum exhibit in Israel a year later. I cried. I cried again watching the films and reading the explanations at the Gush Katif Center exhibit hall. The films shown on the path through this new museum represent the life that was lived in Gush Katif and its many communities. It is shown through the eyes of a child - the last child born in the Gush - who never knew the life there. He asks his mother, who has been reluctant to talk about it, to tell him what it was like.

Following the Six Day War, settlement was renewed there, starting with Kfar Darom which was established as a Nahal outpost, followed by the communities of Netzarim and Morag. Early settlers were from various movements, religious and non-religious, a diversity of– people accepting mutual responsibility, upgrading development towns and forming agricultural core groups.

Settlers who were interviewed in the film called the place "magical" and "an oasis with its fine white sand." People in communities cooked together on Thursdays and ate together on Fridays. They built cultural institutions, swimming pools, music and dance groups.

Shifra, our guide, relayed one anecdote about when the rockets began. She was worrying about a math test at school when her cement house started shaking and she hid in her closet. After the rocket attack there was an ambulance outside her house and her family called to her to come out. Two women from the neighborhood were injured in the mortar attack; they were treated and both lived. "This was one story of 5,000 mortar shellings," she told us … a memory from her childhood.

When her family first came as immigrants, it was hard to buy needed appliances and the like. No one wanted to deliver to the Gush. Shifra's father, who had a background in zoology, became an agricultural inspector. It took ten years of hard work for the residents to turn the desert soil into fertile land. Much of the livelihood of the people was in agriculture, and the greenhouses were thriving despite the terrorist attacks that began in April of 1985.

Following the announcement of disengagement, the residents were incredulous. No one told them how to move the greenhouses. "What will I do if I don't plant?" asked one middle-aged man in the film. One of the residents of the Gush Katif villages said, "We cannot leave this place willingly. If this is carried out, it will be remembered as an historic mistake." "We will not raise a hand to the soldiers," others claimed. What could they do in protest? One such act was to form a human chain from Jerusalem to the Gush wearing their signature orange tee shirts.

Having moved to two new homes within one year myself, I wondered how the families dealt with having to leave. Shifra said that everyone in her family, except for her father, was emotionally incapable of packing up. The government gave the families packing boxes; her family received 15. [Moving from our house in Connecticut to our condo in Massachusetts we used over 250 boxes, not counting what we took in many trips in our car.] In one exhibit room, we sat on stools that were replicas of the boxes given to Gush families.

The date set for disengagement was August 15, 2005. "I will not go out of here on my own," said one mother in the film. "Let a soldier come and take me. Is this what I want my children to remember about the Gush?" "Gush Katif is my identity," said a young woman. "If you take away my identity I don't know who I am."

Some families did not pack anything but waited for the IDF to come, then asked the soldiers to tell them the name of the family they were evacuating. They wanted to be seen as people, not victims. The army gave them one hour to pack…but helped them and even carefully removed the mezuzahs from the doorposts.

Scenes from Israeli TV news explain the plan: Army convoys encircled each village on evacuation day (thus blocking the way in or out by other vehicles). Throughout the scenes, grown men are crying. In the film, truck after truck after truck is seen coming into the area to take the residents out. A rabbi says "We won't leave this place willingly." A father says "I won't raise my hand (to a soldier). I'll try in as many ways as I can to not let them take me. They are like my own sons." There is footage of taking out the synagogue…books, Torahs…congregants and army alike in tears. One scene shows the parting from the Gush Katif cemetery before the graves were evacuated.

I remember seeing on American TV scenes with soldiers crying over what they had to do, scenes of a soldier and a resident in a tearful embrace before the one dragged the other away. In a scene in the Gush Katif Center film, the head of the officers' training unit is hardly able to speak about this "unnatural mission" asking residents to cooperate with the IDF with love and a salute. Everyone is crying. We see the bulldozers wrecking homes, beautiful little red tile roofed homes with neat little gardens, and all the greenhouses (which were bought and paid for by American donors to give to the Palestinians so that they could have businesses in the Gaza Strip but which the Gazan Arabs subsequently destroyed.)

Where did the residents of the Gush Katif go? The government gave reparations based on the number of years a family had lived in the Gush with extra if it owned its land. Given that real estate is so very much more expensive in the rest of the country, the reparations were not enough for many to build a new life, thus creating a loss of livelihood as well. Many went to temporary caravan sites. Some went to hotels. A few went to family. In all, the Gush families went to many different areas, each choosing where they wished to go. A total of 21 communities were destroyed. Eleven new ones were established elsewhere and eleven existing communities grew with their new Gush members. Some families are in the Golan Heights in the north, some in the Galilee, some stayed south in the Ashkelon area.

The Center puts a very positive slant on the story. They don't want pity; they want to be remembered for the vibrant community they were. There is even a mural made out of stone fragments from every synagogue in Gush Katif along with a poster showing photos of every one.

The symbol for the Gush Katif Center is a large Magen David that is split down the middle with a palm tree growing out of it. The names of all the communities are written on its side. I asked our guide if she thought that the government had sufficiently compensated the families and how many were resettled now, nine years later. She said that only 60% of Gush families are now in permanent homes. In her own family, her father is still unemployed but her mother is working. Overall there is a 30% unemployment rate among families from Gush Katif, five times higher than the 5.8 % rate for the rest of Israel. 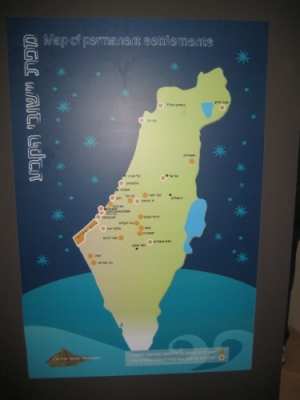 A total of 21 communities were destroyed. This map in the Gush Katif Center shows where the residents are today. Eleven new communities were established, and 11 grew with their new Gush members

According to Aiton Birnbaum, our official and licensed She'arim guide (and the eldest son of Rabbi Ervin and Hadassah Birnbaum from Netanya), who is a clinical psychologist in his other life, many of the families suffer from Post Traumatic Stress Syndrome (PTSD) as they never really accepted the evacuation and the need to prepare to cope. However, others show post-traumatic growth in the way they have rebuilt their lives.

The topics handled by the Center revolve around the central theme of "the city will be rebuilt on," which tells the story of Gush Katif on all its different layers: 35years of settlement, faith, agriculture and community; the struggle and uprooting phase; and the ability to gather strength to rebuild and renew.

The tour of the Center brings forth an authentic encounter with a human, Zionist story of creation, destruction and renewal, serving as an experience that examines our Israeli-Jewish identity.