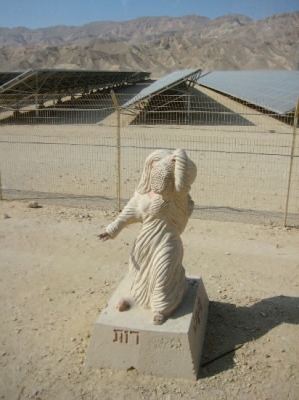 Looking for a change of pace or of scenery from Israel's cities or Mediterranean coast? A trip to the Arava provides both with a stay at Keren Kolot, the educational tourism arm of Kibbutz Ketura. It would have taken us four and a half hours from Netanya in a chartered bus, but we added stops at Sde Boker to see Paula and David Ben Gurion's graves with a beautiful overlook, and at the Ramon Crater where ibexes posed for us on a ridge overlooking the giant crater.

Kibbutz Ketura was founded 40 years ago by a group of 30 American graduates of Hadassah's Young Judaea Year Course. Ketura is unique among kibbutzim for its religious pluralism. Although not considered a religious kibbutz, kashrut and Shabbat are observed in the dining room, public areas and at social and cultural events. There is also an egalitarian synagogue as well as a separate room with an ark that can be used by more traditional groups which want separate seating for men and women. There is no formal affiliation with any religious movement and members are free to practice or ignore religious traditions in their homes. The kibbutz is comprised of orthodox, conservative and secular members—an unusual situation for an Israeli kibbutz. Ketura has received the Speaker of the Knesset Prize for religious tolerance. .

Changing the Economy/Harnessing the Resources

About15 years ago when the economy of Kibbutz Ketura changed, its members decided to concentrate more on the natural resources of the sun, the land and the aquifer. They harnessed its solar power and water into a sophisticated algae farm, Algatech, in which the sea plants are grown in a filtration system of clear pipes and sold mostly to Japan. Their antioxidants are extracted and used in food (a nutraceutical) and cosmetics, as well as for fish food. 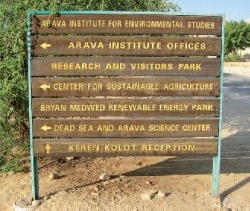 The Arava Institute of Environmental Studies, which brings together students from the Palestinian Authority, Jordan and Israel in a platform for peace, was begun in 1996 by Ketura member Alon Tal (who ran in the most recent Knesset election). We had an opportunity to hear about the project from a panel of students after dinner one evening.

Dr. Elaine Soloway, the eminent experimental biologist, does her agricultural experiments at Kibbutz Ketura. We got to see one of her most unique plants, affectionately known as Methuselah, a date palm germinated from a 2000-year-old date seed found at Masada.

The Arava is Israel's Silicon Valley of renewable energy according to Avital Nusinow, a Kibbutz Ketura member who spoke to us on behalf of the Alternative Energy Authority of the Eilat Regional Council. The renewable energy initiative came to life in 2006 in the strategic plan that came out of the WATEC convention, an annual event that deals with water technology and renewable energy. Its goal is to reduce emissions by 20% by the year 2020.

In 2006, American Yossi Abramowitz took a year off to come to Israel with his family. They chose Kibbutz Ketura because Yossi had previously been a volunteer there. He joined the kibbutz's course for environmental energy and five years later, the first solar field in Israel was established at Ketura. His year off turned out to be anything but!

We visited the solar fields of the Arava Power Company, which was founded by Abramowitz, in partnership with Ed Hofland, a businessman from the kibbutz, and David Rosenblatt, an investor and strategist from New Jersey. It is now the leading commercial developer of solar power in Israel; Kibbutz Ketura is a part owner. Built in June 2011, it uses 18,500 photovoltaic panels situated on 20 acres in the Arava, and produces 5 megawatts of electricity. Another Ketura solar field is planned that will be eight times bigger ,on 160 acres, and will produce about one third of the energy needed for Eilat, located 40 minutes drive to the south.

In keeping with the Jewish tradition of leaving the corners of fields for the needy, Yossi established the practice of donating the proceeds from the equivalent of the four corners of the solar field to four different charities: Jewish Heart for Africa; Bustan, which helps Bedouin in unrecognized villages in the Negev; the Elie Wiesel Foundation for Humanity; and the Red Mountain Therapeutic Riding Center at Kibbutz Grofit. There is a statue of Ruth just outside the solar installation which symbolizes the gleaning of the corners of the fields.

A special banquet for our group was followed by a musical performance, and a choice of three desert-art workshops. Ketura also provided us with two tours of the area. On Kibbutz Yotvata not far from Kibbutz Ketura, we saw their pilot project for a thermal solar plant. This type of solar energy gatherer uses a parabolic mirror to track the sun from east to west. The center has an oil-filled pipe; the oil heats up, and it boils water which operates a high pressure steam that drives a turbine. This tracker receives enough energy from the sun to move itself and therefore requires no external source of electricity. Across the field, another pilot project uses castor oil, from a natural substance, and thereby it becomes self-sustaining.

At Kibbutz Tamar, we viewed their sun tower project. This type of solar energy system is good for off-the-grid places such as in Africa. We met William Bisinger from South Africa - the brains of the Sun Tower Project. There is, indeed, a large tower with a sun-powered globe on top which we were told not to look at for more than a few seconds, because it is so bright. This project uses solar radiation. There are 800 square meters of mirrors that redirect the sun's rays to a central point atop the tower. Air is heated to 1000 degrees centigrade and that powers the turbine. The application, which makes electricity from heat, is good for small factories or communities away from the power grid which have sufficient space for the tower and mirrors.

The visit that had our group talking the most was the one to Kibbutz Naot Semadar, a 23 year-old kibbutz started by 90 people who previously knew each other from Jerusalem when they were all aged around 30.

These founders wanted to build a place for learning through relationships, creating a learning community that focuses on cooperation and creativity in daily life. They have 50 children and a school that teaches children until 8th grade. Located about 400 meters above the Arava, its climate is different from that of Kibbutz Ketura. It is colder at night and in the winter. The average rainfall is but 2 cm per year!

The most fascinating place at Naot Semadar is its arts and crafts center, the tower of which is visible from the road. It took the members 13 years to build and was described as "a project of their cooperation to take them to their limits." They had to learn all aspects of building and design as they went. The building uses desert design principles. There is a cooling tower based on water in the tower, so the result is a passive cooling system rather than air conditioning. The top of the tower has a wind collector that helps air come into the rooms. Thick walls create thermal mass. In the heat of day, the walls are still cool from the previous night. The walls are sandwiched with mud bricks and concrete for insulation. GRC, or glass fiber reinforced concrete, is layered over the mud brick interior of the walls. There is a large shaded court and terrazzo floors throughout. Some rooms have beautiful stained glass windows in peacock or flower designs. Wooden doors are hand-carved. The exterior color is pink with shades of aqua, with the colors built into the building materials for permanence. The whole effect is like a castle similar to the Bahai Temple in Haifa. 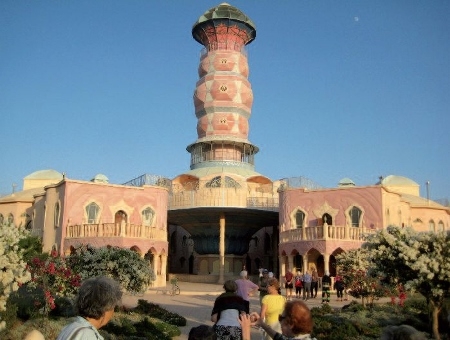 The Arts Center at Naot Semadar

The building, which is used for workshops in learning to create and cooperate, has spaces for wood sculpture, ceramics, glass, weaving and the like.

A typical day at Naot Semadar starts with a 05:30 silent meeting in the dining room. Meals are eaten quietly. Each person sits in the next free place, not necessarily with his or her friends. If you need to talk to someone, you go outside. Children have their own dining room during the day; on weekends they eat with their families. The community doesn't eat meat. Meetings are deep discussions concerning the self and the meaning of inner freedom. They do not have TV in their houses but do have one for the children. They all change kibbutz jobs from time to time. Every six or seven years in the summer they all move out of their houses — renovate them — and then they all move into different houses.

As far as the finances go, Naot Semadar maintains an organic date plantation and a big organic farm which includes citrus because of their elevation above the Arava. They make jams and nectar from their apricots, plums and grapes. They maintain olive trees from which they produce organic virgin oil. Their goat farm has 250 animals from whose milk they make organic cheeses. They produce intricately designed terrazzo tabletops and also maintain a solar field. They have a winery in which they produce 10,000 bottles of wine per year and are considered the only boutique organic winery in Israel. They have numerous prizes to show for it. Their arts and crafts shop is a wonder- the level of craftsmanship and artistry is superb, and the prices reflect that.

The Methuselah tree at Ketura

Just when you think you understand kibbutz life, you find out that you don't …

You can learn more about Kibbutz Ketura and how to visit it at www.ketura.org.il. Click on the word Welcome (in English) for the English version of the website.