We fooled the KGB not once, but twice 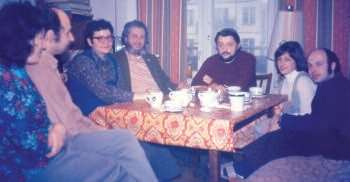 In secret ... a clandestine Hebrew class held in Moscow in February 1976 attended by members of the UK’s 35’s campaign. At the meeting was human rights activist Natan Sharansky (right), now an Israeli politician and Chairman of the Jewish Agency

So, how did a young couple like us get to lecture to the Golden Age Club? It started when we attended the initial ESRA meeting in Herzliya in April 1979 and met other Anglos we hadn't known before. While I was pregnant with Gidi (who's now 32!), I became involved with the hand-distribution of the ESRA Magazines and got to meet more people as I persuaded them to deliver magazines in their own area.. Amongst them were Wally and Natalie Gold, and Harry and Ann Cole who asked us to fill in one of their weekly slots of speaking to the newly formed Golden Age Friendship Club. We arrived with our slide projector, plus slides from our trip to the Soviet Union, and shared our experiences below.

In London, during the 1970's, we had become involved with the 35's campaign for the release of Soviet Jews. The natural progression was for us to visit Russia, make contact with as many Refuseniks as we could, and encourage them to go to Israel. A secret contact connected to a certain embassy in London briefed us on the obstacles we would meet along the way. We received addresses and telephone numbers of Refuseniks in Moscow and Leningrad with whom we were to make contact. We transposed this information into a pocket diary using a complicated code combining the Hebrew alphabet and English letters so that it looked like a regular diary and address book.

On our way back from Leningrad to London, the KGB stopped us, delaying the plane as they strip-searched Mike. Our diary book indeed fooled them and even after a close inspection they returned it to us. During the search, they also discovered 2-kopek coins strewn about Mike's clothing. Although it was forbidden to take Russian money out of the country, they returned the coins to Mike to keep as souvenirs. What they didn't know was we had been given a supply of these coins for use in the public telephones, and that those not used we were to bring back so that they could be given to future travelers.

We fooled the KGB twice!