Voices workshop in Tsfat at the home of Yehudit and Reuven Goldfarb.

Watching and listening to veteran poets of Voices Israel Group of Poets in English reading their early poems and sharing their memories of the organization in the 1970s and 1980s, it was hard to believe that these vibrant inspired people had been part of the organization for 40-50 years. But as this writer, also a former President of Voices and now Press Officer and coordinator of the Haifa branch, pointed out in her introduction to the Gala Anniversary event on Zoom in July, "we were of course very young new immigrants at the time,".

A chance remark by former president Susan Olsburgh, coordinator of the Netanya/Sharon branch, reminded members that in the summer of 2021, Voices would celebrate 50 years. With so many members living in the periphery of Israel as well as overseas, Zoom made it possible to plan a celebration to include the veterans and newer poets, to hear about the history of Voices and the growth and development into the 21st century. 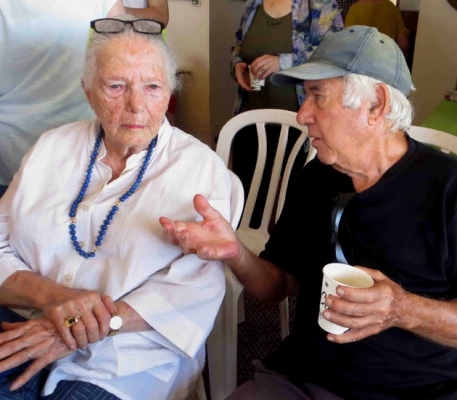 Susan Rosenberg, Voices veteran secretary and John Michael Simon, former designer and producer of the Voices anthologies at a workshop

Present President Judy Koren of Haifa described the founding of Voices in 1971."Voices Israel started in Haifa, as a result of a small Personal ad placed in The Jerusalem Post by Leslie Summers of Kibbutz Ramat Hashofet. Moshe-ben-Zvi, (then living in Carmiel), and Reuben Rose of Haifa responded, and that August the meeting that led to the formation of Voices took place at the house of Ya'akov Katwan. These were the four co-founders of Voices and it quickly became clear that Reuben was the natural leader of the group."

Mark L. Levinson related his personal memories of when he joined the fledgling Haifa group while he was still in the Army. "Reuben Rose was dedicated to the vision of creating a forum for English-language poets in Israel," he said. Reuben then went on to create a group in Tel Aviv, later taken over by Mark and from then he travelled monthly to Jerusalem to form a branch in that city.

With these three groups meeting regularly, Reuben took on multiple jobs, producing a monthly newssheet and editing an annual anthology, typewritten by him on a manual machine and with the pages stapled together. With his wife Susie by his side, hosting committee and editorial meetings, he continued this work until his untimely death in 1989, always with modesty and a dry sense of humor. After his death, with the continued support of Susie, Voices established the annual Reuben Rose International Poetry Competition which continues until today, as well as a laser-printed glossy annual anthology.

It was the next President, the late Mike Scheidemann, who initiated a regular program of weekend and day workshops. gave members an opportunity to learn from guest presenters and members themselves about the various genres and styles of poetry and the work of the well-known classic and contemporary poets. The traditional residential workshop: Poetry by the Sea – in Netanya - has unfortunately been postponed for the last two years because of the Covid-19 pandemic.

After paying tribute to the founders who had sadly passed on, Mark led the group of veteran poets to tell their stories and share their early poems. Many of these early members have held positions on the Board or the editorial committees for many of those years. 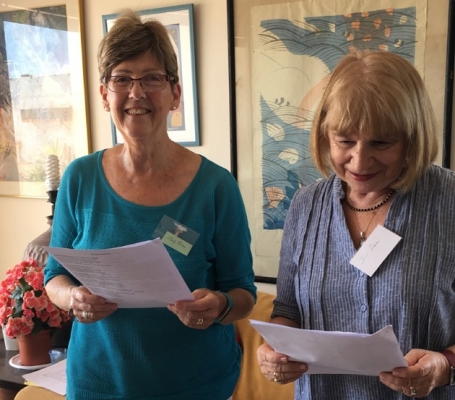 Judy Koren then took the audience into the present day. Since 2011, Voices entered the digital age, producing the monthly newsletter and distributing it by email. Linda Suchy of Netanya has transformed this into a new style full of information about competitions and events of other groups, selected poems and promoting Voices new ideas.

Another innovation since 2011 was to create more branches for regional monthly meetings. These are small groups that meet to share their poems and receive friendly critique. There are now groups in the Western Galilee, Upper Galilee, Netanya/Sharon, Ashkelon, Beer Sheva with potential groups starting in Efrat and Bet Shemesh, in addition to the original groups in Haifa, Tel Aviv and Jerusalem.

In addition to the annual Reuben Rose competition, for the past two years Voices has organized a Young Poets Competition, sponsored by Anthony Joseph in memory of his granddaughter the late Bar Sagi who passed away at the age of 15 leaving a collection of beautiful poems.

All of Voices activities were about to collapse with the first lockdown in the spring of 2020.But Zoom came to the rescue and Susan Olsburgh set up a Voices Zoom link that enabled all branches to continue their monthly meetings and even organize half-day workshops. Far from collapsing, Voices reached out to many more poets, with a Global Group for members overseas and a record number attending the Annual General Meeting and competition Awards ceremonies.

Then the program introduced the next generation of Voices poets who participated in an Open Mike.

Following this inspiring Gala event, celebrating Voices past and present, an anniversary chapbook including all these memories, photos and poems is at the printers and will soon be ready for distribution.

For more details about Voices Israel, check the website: