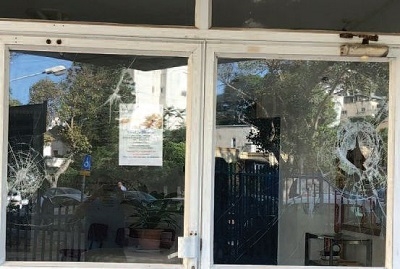 Overnight last Shabbat our synagogue was vandalized. Someone threw rocks through the glass entrance doors. Jagged pieces of glass hung from each frame and the rocks were on the top step and some inside the lobby. That was our greeting as we headed to Shabbat morning services.

Another congregant was walking in with us; I asked if she knew what happened. She didn't. Shocked, the three of us went upstairs to the sanctuary. At the kiddush, we learned only a little bit more. Everyone had been surprised when they arrived for services that morning. At that point no one knew who did it. But, we were told it had started when someone tore down the banner that had announced a recent havdalah program of Hebrew songs offered for free to attract the community to our facility.

I remembered a similar rock throwing incident about seven years ago. It happened right after we had arrived back to our then-home in Connecticut from our winter rental in Netanya. A Reform rabbi in our area sent us a small one-paragraph article from The Forward saying that "a Masorti synagogue in Netanya" was attacked as several young haredi boys, peyot (forelocks) flying, had thrown rocks at congregants coming to Friday night services.

There is only one Masorti synagogue in Netanya, one among 200 or so Orthodox shuls (and one Reform congregation) in a city of 200,000 people. This rabbi had sent us this article because he knew we had just returned from spending the winter in Netanya, I don't think he knew that it was our synagogue. I was shaking. And livid. And back in the USA.

We were 6,000 miles away, but I had to do something. I wrote letters...to the newspaper, to the mayor...and to the congregation, in support. And then I tried to think of what else I could do. I asked a friend connected to the Orthodox community to try to get the Orthodox rabbis to talk to their congregants about the incident and explain why such behavior is wrong, but my friend didn't believe anyone in the Orthodox community could have done it.

That it was Shabbat when it happened meant that no one could call the police until sundown. On Sunday evening we went to the AACI for the "Ben Gurion Epilogue" film and there, too, were numerous of our fellow congregants. Our rabbi emeritus' wife told us that she had just received a call saying that people had broken in to the synagogue and done some more damage. On Sunday. A second day of vandalism.

On Monday afternoon, at the She'arim classical music concert, the rabbi told us what the boys who vandalized on Sunday had been seen wearing. On Monday evening, Alan, my husband, attended the synagogue's annual meeting. He updated me when he returned home. The rabbi emeritus' wife had gone to the police station after Shabbat ended to report the vandalism from Saturday morning. The police told her we needed to install additional cameras. A group of people were using the building on Sunday evening when boys in black hoods entered and went upstairs. The group authorized to use the synagogue that evening didn't stop them; they thought the boys belonged there. The group was all female and not about to attempt, by themselves, to stop boys up to no good. This time they only upended the water cooler and cut the hose before running out again. We do keep the sanctuary locked.

No one got a good look at them, because of the hoods, or what I take to be "hoodies" that can be worn to obscure one's face when seen from the sides. Haredi youth don't wear clothes like that; don't own such attire. Must have been non-haredi youth this time.

These hoodlums must have been Israeli Jews. Vandalizing a MASORTI synagogue. Because many people, including Orthodox rabbis and the Chief Rabbi's office, write and say awful, denigrating things about non-Orthodox streams of Judaism. Never about secular Jews, who are a large percentage of the population. Only about "progressive" Jews. Those who choose to count women as people equal to men in the eyes of God. Our prayers are the same as the Orthodox. Our service is the same (with the addition of English page announcements and translations of the sermon). But women sit alongside the men instead of in a curtained off gallery. Some dare to wear prayer shawls. They are called to the Torah for an aliyah. Some dare to chant the haftorah. And a few dare to lead the prayers.

Only in Israel do other Jews throw rocks at you and your house of worship on Shabbat for the sin of praying in mixed company.

P.S. Rocks were again thrown at Bet Israel Masorti Congregation in Netanya less than a week later, after the glass had already been replaced from the first incident.