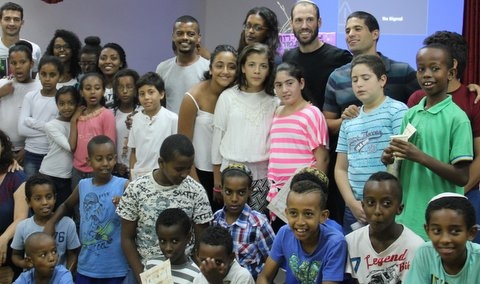 This past month has seen the celebration of Pesach (the festival of Freedom) as well as the 67th anniversary of Israel's re-birth in 1948. There is no doubt whilst Israel faces many challenges the one challenge those of us living here do not face is the right to express our individual identification as Jews.

This is not the case for our brothers and sisters living in the Diaspora. During this past year we have seen an unprecedented rise in anti-Semitism – the like of which we have not seen since the 1930's. We have witnessed the frightening situation for Jewish students on campus where "Israel Apartheid Week" - which began in Toronto Canada in 2005 - marked its eleventh anniversary this year. It has spread to campuses worldwide and takes place annually during the months of February and March. For those who have, in the past, endeavored to draw a line between anti-Semitism and anti-Zionism may I suggest they take note of some of the recent demonstrations that have taken place, supposedly anti-Israel, but with participants carrying placards saying "Kill the Jews" or "Jews out".

As we celebrated this year's Yom Ha'Atzmaut we take pride in what this little country has achieved in spite of absorbing millions of refugees and having to fight for survival on too many occasions. Much of the successful absorption of new Olim is down to Non-Governmental Organizations such as our very own ESRA. Born in 1979 - primarily to assist Olim from English speaking countries – today it continues to provide the most amazing and varied programs for English speakers.

Back in 2005 the late Audrey Goodman, an outstanding ESRA leader, past Chairperson of our Association and one who continued up until her death to chair ESRA's dynamic Program Committee, founded our stimulating Cinema Club in Raanana. Here was born the opportunity to see fascinating Israeli made documentaries about life in this little country. Audrey also made sure that the audience had the chance to meet and dialogue with the producer/director of each film. The Raanana Cinema Club was truly Audrey's baby – one she nurtured and one that became an extremely popular activity which drew a waiting list for each production. It has taken a few months to find someone to run the club but it reopened on February 25 and is now renamed "The Audrey Goodman Cinema Club" – a tribute to its founder and mentor. We are delighted to welcome Ellen Spitzer as the club's new coordinator. Ellen is a Raanana resident of 24 years having made aliyah from Montreal in 1991. Watch out for the great films Ellen has in store for you!

ESRA has evolved so have our responsibilities – today we have become a productive source of support especially for those youngsters who need our help most of all. How proud we can be of our volunteers who give of themselves – whether helping youngsters to succeed in their English Bagrut examination (our English Tutoring Program); assisting teenagers at risk through our Right Track Centers where participants come 5 days a week after school to be given that all important help with their school work; our Bayit Cham for girls at risk who find a warm place in Herzliya and Netanya where the psychological support we offer makes a huge difference. Our flagship Students Build a Community project – now operating in three exceedingly deprived areas of Netanya - not only helps the kids on the block with their schoolwork but also the carefully chosen students act as role models for the youngsters they tutor.

Freedom comes in many forms – there can be no doubt that it can be interpreted as the freedom ESRA contributes to a child's future. The opportunities for a brighter tomorrow are the tools that make the difference. ESRA prides itself on doing just this through our varied and manifold projects.

ESRA is a success story but success also brings its challenges and, perhaps, one of the biggest challenges is to find more members, more volunteers and more funds to intensify and increase our contribution to Israeli society. We would very much like to reach out and offer our achievements to the many that, without doubt, would benefit. The starting point is to increase our membership, thereby increasing the number of volunteers to carry this movement forward. Can YOU help? If so I would personally love to hear from you - together we can and we will make a difference.