Unbreakable Israel, That’s Who we Are 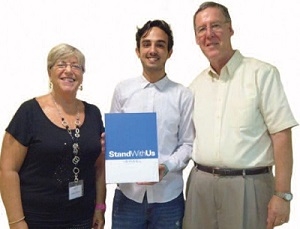 Prior to his aliyah, Richard Corman had an extensive career in Jewish communal service in the United States. As Development Director, he oversees all the organization's activities, including fundraising, informational meetings and the production of educational material about Israel.

StandWithUs evolved from a meeting held after a terrorist attack that killed 13-year-old Koby Mandel and his friend Yosef Ishran. It claims to be the world's largest educational information organization about Israel. There are now 16 StandWithUs branches globally, with activities in Asia (China, Japan, South Korea and India) and in South America (Brazil and Argentina), after Jewish communities asked for help to combat anti-Semitism. It posts daily in 15 languages on the Internet. The English site alone receives over 105 million hits every week.

Annually, about 150 students undertake grassroots studies through the organization, with a view to becoming future role-model leaders and ambassadors around the world, armed with impressive information brochures. Richard proudly noted that the Charity Navigator and Guide Star have accorded highest ratings for efficiency and donor confidence to StandWithUs.

Concluding his presentation, Richard left us with a beautiful vignette. The late Rabbi Soloveitchik told the story that when deciding what would be the name of our new state in 1948, the name Israel was chosen because it is made up of the first letters of the names of our patriarchs and matriarchs: Yaakov, Sara, Rivka, Avraham, and Leah. "Any talk of Israel," he said, "is about who we are – unbreakable, and much more than historic."

Yahya Mahamid, born into an Arab family in Um El Fahm, defines himself as an Israeli Arab Zionist and serves as an educator at StandWithUs. He was indoctrinated from childhood to hate Jews and deny Israel's statehood. However, when Yahya began to have regular interactions with "ordinary" Israelis at the age of 17, he began to see a different side to them and the conflict, one totally in opposition to the "lies and untruths" he had been fed for years. This led him to a decision to do everything within his power to combat the fabrications and demonization of the State of Israel.

When StandWithUs contacted him about helping them with Arabic language social media on the Internet, he jumped at the opportunity. Based on the interest his efforts have generated among Arabs in the Palestinian Authority and other neighboring countries, one might claim that a tiny dent has been made in the ongoing onslaught of anti-Israel rhetoric from these countries.

Yahya has travelled the world on behalf of StandWithUs Israel, from a Limmud session in Finland, to the anti-Zionist, anti-Apartheid week in South Africa, which began viciously with BDS students waving knives and shouting "Israel is killing Arabs". His determined stand against the protesters demonstrated which side is violent and which represented peace, and by the last day, the BDS crowds were nowhere to be seen.

When he met a Moslem medical student from India, Yahya proudly told him about Israeli innovations in the medical field, such as the 'Pillcam'. He believes that by standing his ground and through patient explanation, he can plant the seeds of friendship and understanding.

Articulate with an excellent command of English, Yahya touched on the huge emotional and personal cost of his decision to work for Israel. Most of his family disagrees with him, and some have cut ties. He has lost many friends from home, yet he remains convinced that he is doing the right thing. He pointed out that much activity goes on behind the scenes in secret, because fellow Muslims who might agree with him are afraid to come out in the open.

Yahya emphasized that the only way to evade conflict in the region is by "stopping incitement". For his part, he aims to do just that. Yahya will shortly be inducted into the IDF as a lone soldier.

It was a stimulating and thoroughly absorbing evening – and the speakers left me wanting to ask and learn much more. The talk given by Richard Corman was a refreshing beacon of hope for everyone such as myself, who, as a former Chair of one of the largest university Israel Societies in the UK, sometimes despairs at the apparent lack of accurate information about Israel. YahyaMahamid could not, at first sight, appear to be a less likely participant in the process of representing Israel fairly. Born and raised in Um El Fahm, one of the most notorious and militant Muslim towns in Israel, his was an extraordinary and uplifting account of how from even the most unpromising of backgrounds, it is possible for people to change. His decision to join one of Israel's elite army units dedicated to eliminating terror attacks, often perpetrated by the very people among whom he was raised, is extraordinary to say the least. His account was all the more fascinating since it was based on his real-life experience and the discussion that followed led to highly perceptive and wide-ranging questions