Travellers Explore the Past 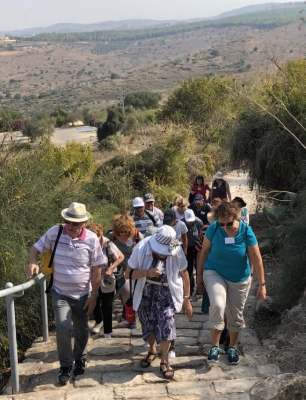 Best foot forward ... climbing to the Upper City at Tzippori

Over 40 people, hailing from Haifa in the North to Kfar Saba in the South and all points in between, filled a bus of time-travelling explorers who spent a perfect ten hours together learning so much and getting to know one another with great delight.Our professional licensed tour guide, Stephen Kliner, with the assistance of his wife, Barbara, chair of ESRA Netanya, Michael Tucker and Phil Margolis, created a magical day's outing in early autumn in the lower Galilee, transporting us all to the time of the Mishna and early Talmud.

Our travel menu included the gorgeous Roman era Jewish/Roman town of Tzippori, and Bet She'arim, with its history-laden burial grounds of many of the most famous people of the Mishnaic time.My husband Larry and I have been there before but never on an expertly guided tour such as this. Stephen gave us a great deal of information about what IS known as well as elegantly and respectfully raising questions about the things that some authorities consider unknown or uncertain at this point in historical archaeology.

Mosaic ... the Mona Lisa of Tzippori

With his eye for artistic and aesthetic detail, we were able more keenly to understand and perceive some of the most beautiful mosaics in the world, and to imagine them in use by the members of the Sanhedrin, the many study houses, and of course Rabbi Judah HaNasi himself. We were fascinated by the interplay of Roman and Jewish culture over many centuries in that gorgeous hillside location with its strategic vistas, it's (then) up-to-date aqueduct and reservoir system, and its unique political situation:a Jewish town which decided to coexist with the Romans and which therefore developed a sense of security with the powers in Rome, as well as the Roman citizens living there.As a result, it was there that the Jewish people began to adapt to the loss of sovereignty and home land, the dispersion of its people, the end of priestly dominance, and the need selectively to include decisions on how to survive, thrive, and go forward under the Pax Romana. They did not join either of the disastrous Jewish rebellions against the Romans and it was so fascinating to see and to study the results of that choice 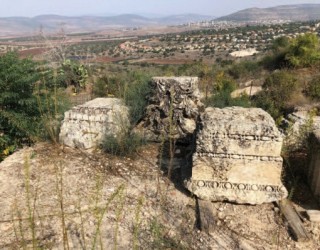 After lunch, we went to see the burial caves in Bet She'arim, the resting place of many of the famous citizens who had lived in Tzippori and the surrounding areas.Stephen regaled us with many stories, as well as leading us through gorgeous chalk catacombs in a valley of many entrances.Some of the decorations on the sarcophagi and other burial boxes were classic, beautifully executed, and full of meaning. Larry and I were so fascinated that when we came home that night we listened to several podcasts about Rabbi Yehudah HaNasi and his sons Shimon and Gamliel who succeeded him. We could picture many of the legends of Tzippori as well as the controversy about the Nasi's decision to write out the Mishna, making the oral law "written'' - oral law. It was mentally energizing to become intimately familiar with the beautiful scenic places that form the theater and stage for the lives and culture of those centuries of Jewish history here in Eretz Yisrael.

As the day started drawing to a close, we stopped off at the richly stocked Derech Tavlinim – spice store - full of spices and herbs and tea infusions — all in a modern setting near to the German Templer village of Bethlehem of Galilee which is now lived in by contemporary Israelis. It was dark by the time we got home, effortlessly avoiding traffic jams because we had such a remarkable bus driver, Roni, who hosted us with a warm smile and good humor throughout the trip.

It was a full day, a long trip through time, filled with fresh air, stunning vistas, learning, light and beauty. Thank you Stephen and ESRA Netanya. 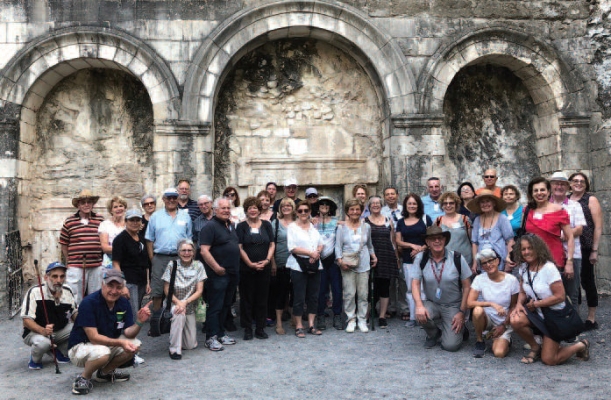 The ESRA group at the tomb of Rabbi Yehuda HaNasi, Bet She’arim
PRINT