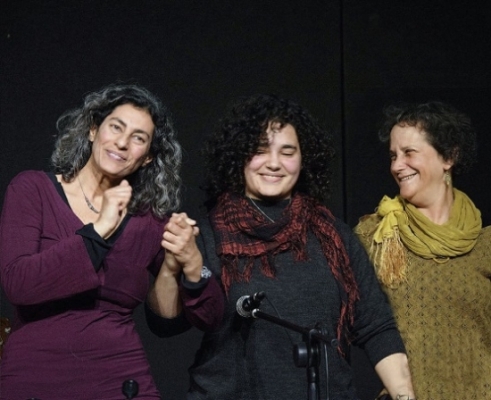 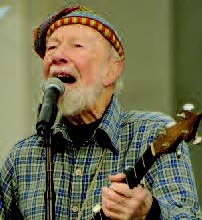 One of my most abiding memories of my South African childhood is sitting in the dining car of an SA Railroad train, drinking coffee and guzzling chocolate, as we sang "We shall overcome some day". We had just spent three weeks at a Habonim camp, where we spent hours discussing the evils of apartheid; as we sped through the night on our way home past groups of black children with bellies distended from hunger, we sang Pete Seeger's banned protest songs with righteous indignation, daring the authorities to put us in jail. We were sixteen, and there were no authorities on the train with the slightest clue about American political folk music – we made it back to our own beds without any problems.

Does music play a role in raising political awareness and advocacy? A whole body of research claims that it does; while other sociologists suggest the opposite. But one thing is for sure: when you sing together with people in their language, it is hard to consider them your enemy.

Diane Kaplan, singer, songwriter, teacher, composer of music to the words of Psalms, and mother of three adult children, knows about the healing, transformative power of music through her own skin. An American daughter of Holocaust survivors, she grew up associating German with negativity and fear. Then, ten years ago and already living in Israel for decades, she was invited to lead singing workshops in Germany.

"They taught me to sing in German," she recalls, "and I taught them songs in Hebrew and Yiddish. The experience changed us all indelibly – it opened our hearts to each other."

Back home in her village of Yodfat in the north, Kaplan was determined to harness the power of music to try to make a difference here.

"I started leading singing circles for Jews and Arabs, both Christian and Muslim, in an abandoned church in the Arab village of Eilaboun not far from my moshav."

The church had been unused since the fighting in 1948, when the entire population was forcibly removed in the contentious and tragic circumstances that accompany warfare. Although the inhabitants were later allowed to return, harsh memories remain.

Meera Eilabouni's grandparents were among those inhabitants who were expelled from their village. It was at the first of many musical circles created to heal that trauma, that Eilabouni, then age 16 and also a singer, met Kaplan.

"I believed in peace-making from a very early age," says Eilabouni (now 23, who in October walked the entire "March of Hope" sponsored by "Women Wage Peace" singing all the way). "My songs are about promoting peace and Diane helped me see that music exists everywhere: in nature and in our own personal natures."

Once the two women were harmonizing in English and Arabic, Kaplan decided to bring in her long-time music partner, Dana Keren, to be the Hebrew voice in the mix. Keren, whose grandparents immigrated from Yemen, a singer, flutist, percussionist, teacher and mother of two, lives in the village of Ma'ale Tzvia in the Galilee and has grown up to the beats of world and Israeli music.

For the last two years, "Three Women Three Mother Tongues" have referenced, in haunting cadences, the age-old quest for the hearts-ease that comes from feeling safe. Some of their tunes are well known English songs of hope and peace adapted and arranged, while others are original creations. Guitars and flutes and darbukas easily weave in and out of psalms and folk songs and songs of joy in all the three languages of our region; languages that are all too often used to scream at each other. Sometimes with magical results. At a peace tent set up in an Arab village during one of the many periods of rising tension, a young Arab man yelled at the musicians that this was not the time to sing. Then, as they picked up the instruments and began playing an Arabic song, the man grabbed a darbuka from the pile and jammed with them for an hour. The tense atmosphere dissolved as the music rocked the tent.

Together the "Three Women, Three Mother Tongues" perform at music festivals around Israel and bring their songs of hope to local peace groups such as Women Wage Peace. They have appeared at conventions for the Empowerment of Women, Women Leading Social Change, and for the Advancement of Civil Equality.

As fears, tensions and hatred of "the other" intensify all over the world and especially in the Middle East, they feel that the road to peace depends on meeting and getting to know one another as people.

"We believe that our music can contribute to creating a space for this to happen," says Kaplan.

The three women aim to reach a wider audience by producing a CD.

■Their crowdfunding project "Songs of Peace – 3 Women 3 Mother Tongues" can be found on "Indiegogo" http://igg.me/at/3women3

■They are available for private or public performances for organizations and private events www.dianesong.com