On a sultry July day in 1959, I sat on a rock by David`s Tomb on Mount Zion in Jerusalem. This was the nearest one could get to the Western Wall and indeed I could just see a small section of it across the no-man`s land of thorns and stones and barbed wire. While some are moved to paint a scene that makes such an impact on them, I write poems.

So there I sat, scribbling in my notebook, trying to create a poem from my impressions of the heat, the desolation, the ancient walls, the smell of the thistles and clusters of wild herbs that grew between the boulders.

As I was only a teenager I thought at first that the burly handsome soldier who approached me was being friendly. But he had a gun in his holster and his voice was rough as he asked me in rapid Hebrew what I was doing taking notes on the border. I showed him my notebook but, not understanding English, he escorted me to a guard-post, picked up a telephone and told me to sit down and wait.

A senior officer arrived, one with a more friendly expression. He took my notebook, read my poem, muttered something to the first soldier and handed it back to me with a smile. "That is a very nice poem," he said in perfect English, "but I don`t advise that you continue writing next to a security border."

This incident took place during my gap year spent volunteering on a kibbutz, after which I returned to my home and family in London, changed forever more.

On a steamy July day in 1962, I had no time to sit on a rock but was indeed occupied moving some basalt boulders in the Nahal camp called Almagor in the Korazin region on the northern shore of the Kinneret. I was spending three weeks in Israel on a Young Poale Zion summer camp.

We toiled all day, moving the black basalt rocks and planting tiny saplings in the fertile earth underneath them. In the late afternoon after a cold-water shower outside our tents, we climbed down the mountain to swim in the Sea of Galilee, accompanied by armed guards. The silky waters of the Kinneret soothed away all the aches and pains and we sang late into the night, accompanied by the whispering of the palm trees on the stony beach. Of course, that also inspired a poem or two. It was more difficult to express in words my sadness on hearing a few months later the news of the murder of two of those Nahal soldiers when snipers from the nearby Golan Heights on the Syrian border aimed at them while they were ploughing the fields of Korazin.

On a hot day in July 1974, just a few days after our aliyah, I stood with my daughter touching the cool stones of the Western Wall. My husband and three sons were in the adjacent men`s section.

We had started our walk at David`s Tomb on Mount Zion and I could not believe what a short distance it was through the bustling Old City to the noisy plaza where competing prayer groups and Barmitzvah families chanted along with the sounds of ululating grandmothers. 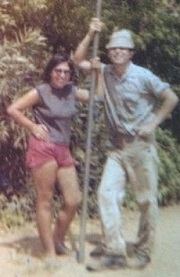 The writer aged 19, a kibbutz volunteer

On a hot but breezy July day in 1996, with our children already married, we sat with a group of friends in the luxuriant garden of a guest house in the green and leafy village of Almagor. Gone were the Nahal tents and the basalt rocks: instead had blossomed a paradise of beautiful houses surrounded by tall trees and sweet-smelling gardens. I mentioned my earlier visit to the owners of the guest house and they took me to see the trees that I had planted together with my YPZ comrades so long ago. On a note of serendipity, the couple had been among those Nahal soldiers in 1962 and had returned to Almagor to set up home.

I was reminded of my first 1959 visit to Israel as a kibbutz volunteer when I had a phone call a few years ago from a very old friend who was moving house. He had found a bunch of letters that I had written to him at that time. He promised to keep them until we next met and I was thrilled that there was a written record of those adventures. Before the days of Internet, satellite phones, WhatsApp and Facebook, the only way I could communicate with family and friends during my stay in Israel was by scribbling in tiny handwriting on those flimsy sheets of airmail paper.

When I graduated from high school, I had no idea what I wanted to do with my life; I needed some time and space. As the youngest child and only girl in my family I was over-protected and my parents were horrified when I told them my plans to volunteer on a kibbutz. Readers who have heard about my father`s service in Palestine in the First World War may remember that he never came back to Israel because, "It`s sand, it`s all sand." And he never believed the stories of the development of agriculture and industry and the growth of towns and rural settlements.

My family was reassured that I was travelling with a group, and sure enough we all met at Victoria Station one cold February morning, travelled by train and ferry and train to Marseilles and embarked on the Theodor Herzl. The first sign of chaos that was symptomatic of life in Israel was the pile of luggage left on the dockside at Marseille as the ship left port. So we all came into Israel with nothing but our cabin-cases and an inadequate supply of knickers.

I never regretted that journey by ship because to see Israel for the first time from the sea is so much more meaningful than landing at an airport.

The ship arrived in Haifa early in the morning and we watched the Carmel emerge out of the dawn mist. The dome of the Bahai shrine, gleaming in the sunlight, was surrounded by a forested mountain. There was very little building on the upper slopes of the Carmel. There was a small cluster of industrial buildings near the Oil Refineries but the sky was clear and blue above the clean beaches and small urban suburbs around the bay.

The group was split up at the Haifa port and I arrived at my kibbutz alone in the middle of a blustery afternoon. There was not a soul in sight and the office, a wooden shack on a sandy hill, was shuttered. The wind blew and the sand whirled around me. I sat on my case. Yes, my dad was right. It`s all sand. What was I doing here?

Eventually the volunteer coordinator found me, told me that I had arrived a week early and that I should go travelling. I spent a few days with a cousin in Tel Aviv and discovered the ambience of this bustling chaotic city where crowds thronged Dizengoff at night and residents cooled off on their balconies, calling to each other across the street. The apartments were tiny and few had baking ovens. The delicious cakes that hostesses produced were baked in a Wonderpot on the stove-top.

On a hot night in July 1974 we arrived at Ben Gurion Airport. I had told the children about the special citrus smell of Israel, the eucalyptus trees lining the roads. But as we drove from the airport to our immigrant center in Atlit all we could smell was the pollution of traffic and industry. My husband already had a job at Elbit Computer Systems, so while looking for an apartment in Haifa, we explored the Carmel, now a maze of new roads and high-rise dwellings. And the Haifa Bay was a smog of industrial pollution.

The immigrant center had a tiny kitchen with two gas rings and the minimum of equipment. Needing to cook for six people, I had brought some appliances with me but my first search was for a Wonderpot. Nobody understood what that was by that time but the housemother directed me to a small household shop in downtown Haifa where the owner rummaged around and found one in the storeroom.

After that teenage kibbutz experience in 1959, I had been happy to go back to London to my doting parents and big brothers, soft bed, hot baths and good food. But there was always a yearning to come back. The smell of a fermented orange took me back to the perfume of a summer evening as I walked along the kibbutz paths. A hot sizzling pavement during a London heat wave brought back the smell of a Tel Aviv street on a Saturday night when crowds queued round the block by the Mograbi Cinema.

It had also developed my awareness of modern Jewish history. In 1959, Holocaust survivors were still arriving in Israel and I witnessed the sobbing reunions at the Haifa Port. There were other survivors adjusting to life at the kibbutz and for the first time I realized the significance of the numbers tattooed on their arms.

The Six Day War was a watershed in Israel`s history and all reminiscences seem to focus on the before and after. Looking at that period of the late 50`s and early 60`s through the eyes of a young and naïve idealist, the memories were of a very romantic and adventurous period in my life, but looking at the bigger picture, it was very tough for the people living here.