The Price of Rice Doesn't Add Up 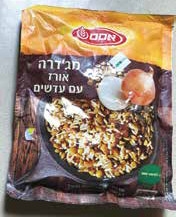 FRIDAY is ready-made food day in the Azrieli Mall, Modiin – as it is elsewhere in Israel, writes Anthony Green.

But how's this for a new twist on how to make a fast buck, or in this case, shekel? My wife and I bought some ready-made majadra rice from one of the mall stalls for Shabbat.

When we asked the price we were told: "It's on special offer – three containers for NIS100."

The boxes were quite big, so my wife asked: "How much for just one?" Came the reply: "That'll be NIS30."

We were tempted to go back another two times, but decided against it.

And the reason we bought it was because Osem is no longer making their packets of majadra rice. What a mistake on their part. Someone should start a petition.