The Melting Pot: A Tale of Three Citizens 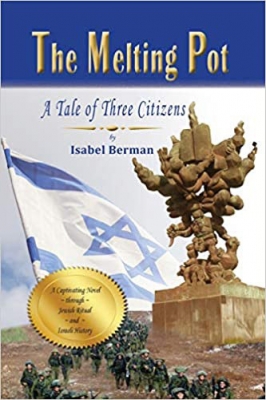 Isabel Berman knows a lot about names and how they tie into identity. When she arrived to live in Israel in 1972, an officious clerk informed her that "Isabel" was the name of a queen who hated the Jews, and suggested she change it. "That was Jezebel," retorted Berman. "Isabel was the name of a Spanish queen and it's good enough for me."

"She was not good for the Jews either," countered the clerk, and promptly named her "Natalie" – her middle name, and one which has stuck on her Identity Card until this day.

But Berman's understanding of identity far transcends her own personal journey: in her almost fifty years in this country she has met with, and taught, thousands of students, many of whom boast life stories that are stranger than fiction. In her debut novel, The Melting Pot, she looks at three of these tales, all based on truth but tweaked to protect the privacy of the real characters.

She has had a storied career as an English teacher in various academic institutions including the Hebrew University, the Open University and as Director of the Government and Communications English program at the Herzliya Interdisciplinary Center. Berman also taught Foreign Ministry cadets for ten years, as well as improving the English of Knesset members for a year. She also developed reading, writing, and oral courses as well as a specific question on the English testing section of the national psychometric exams. But more than that, her work brought her into contact with many of Israel's top students, including some who were "totally brilliant." Drawing upon their actual stories which have been altered to protect their privacy, Berman placed them all in The Melting Pot – Ben Gurion's denomination for the Israel Defense Forces - where soldiers from all sectors and all walks of life meet and mix.

Thus we meet Dominik, son of an Iranian father and an Austrian mom, born in England, who spent time in Armenia and Austria before converting to Judaism and coming to Israel. Once in the Holy Land, a series of emotional discoveries led him to convert to Judaism a second time – only to discover after doing so that his mother and grandmother were halachically Jewish, and he could have saved himself the whole conversion drama.

Then there is Alexander from Slovakia who, aged fourteen when Czechoslovakia separated from Slovakia, found out that he was Jewish. Intrigued by this new side to his identity, he served with the UN Peacekeeping Force in Cyprus and found himself yearning to hop across the sea to Israel; eventually he did so and joined the Israeli army.

The third character is Lise, who for years presented herself as Danish. In truth, she was from Germany, the daughter of an anti-Nazi activist who had been sent to Dachau and then to Egypt as a soldier, where he defected and spent the rest of the war in a British Prisoner of War camp. After the war he returned to what had become East Germany, sneaked out of there to Denmark, married and had a daughter. Lise grew up and moved to Paris, where she met her future Israeli husband. She married, moved to Israel, converted, got married again in a Jewish ceremony, and started a family. Tragedy struck hard with the terrible cot death of one of her baby daughters; her other children all served in the Israeli army.

In a literally "truth is stranger than fiction" novel, characters (and their children) meet in the army and are attracted to each other's strange backgrounds. From here Berman uses poetic license to stretch the facts: "they meet, some marry – but this is already not based on actual facts."

Berman, whose own family history is equally compelling to any of those of her characters, did not grow up terribly Zionistic. But the combination of the Six Day War and the fact that Greece was experiencing a coup just exactly when she had planned to go there for a year of study brought her to Israel instead in 1968, and her path has been intrinsically linked to the country ever since. The Melting Pot embodies the dramas, the conflicts, the joy and the craziness of living in this little land at the center of the universe.