The Girl from Human Street 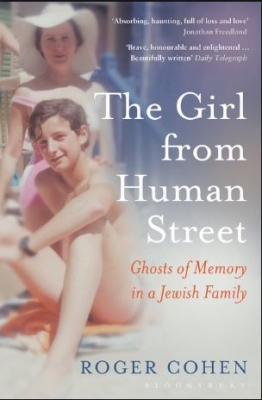 The Girl from Human Street: Ghosts of Memory in a Jewish Family

Roger Cohen works as a journalist on The New York Times. This is the story of his family, a Jewish family odyssey. The writer was born and grew up in London, lives and works today in New York. His parents were both from Johannesburg with grandparents of Lithuanian origin who had emigrated to South Africa at the beginning of the twentieth century.

They came, together with many thousands of others from European countries, mostly from Lithuania. These immigrants were the core of what was to become a large, vibrant and flourishing Jewish community in Southern Africa. His grandparents left Europe, mainly to escape anti-Semitism; his own parents left SA in 1956 to escape the ugliness of apartheid.

The book is entitled The Girl from Human Street. This girl is his mother June, born in Krugersdorp, a South African town near Johannesburg. Indeed, the story – his story – does center around this very loved person in his life, but additionally it is the story of his family. It is of memories and as such it is not told in chronological order.

Perhaps excusing his back-and-forth memoir, Roger writes that his family's story has a beginning, a middle and an end but not necessarily in that order. "Like Chagall's fiddlers, we have been looking in various directions at once."

In his book he visits those places where his family, past and present, lived and died.

The world of his grandparents and their forebears – the people, the background, the shtetl and the Jews there – was so different from what it would become in SA.

He writes too of the Lithuania of Holocaust times and of what had become of those who remained there. He dwells a great deal on this horrific part of our history and indeed these chapters provide traumatic reading.

We are reminded of how fortunate those of us were who grew up in SA and in those countries where we, albeit refugees, were made welcome and our lives spared. We are reminded in chilling terms of relatives we never knew.

South Africa plays a central part in his book. His parents' love and identification with that sunny land become his own. He visited his grandparents' homes often and gives dramatic descriptions of the life there in the years leading up to the fall of the apartheid government in 1994, with the similar love-hate attitude of those of us who come from there.

His, however, was a more objective insight of one who came from a different world. His maternal great-grandparents had become enormously wealthy as did many of their countrymen. Again, one is struck by the sharp contrast with the simple working, often impoverished people and yeshiva bochers of the Lithuanian shtetls.

His father came from a family with a house in Berea, also in Johannesburg, but a suburb of lower middle-class people who worked hard in a store to make a living and, at all costs, to ensure that their children had a university education and a profession. His parents met and fell in love while studying at Wits, the University of Johannesburg where his father studied medicine.

Berea, in those days, was also an all-white suburb which could in no way be compared to the slums and shanty-towns where the black population worked and lived in and around Johannesburg. He mentions that these were only to be seen in those areas as laborers and servants.

He delves into the South African situation at that time – the race relations, the apartheid laws, the attitude of the Jewish people, most of whom fell into line. This, despite the fact that they had suffered more than any other people from race hatred.

In 1956, his parents had left for England to escape the new, extreme nationalist government, at a time when the apartheid laws had become intolerable.

His life in England is described in far less glowing terms. In England, the colors were muted – but there was freedom. "Apartheid corroded the soul."

He speaks of his father as being a sensitive man, attuned to nature. His mother was fragile. "Our past was a secret – not just the Jewish past and the transcontinental hopping but something else, something secret."

His mother was never fully able to accept the grey and wet weather, the self-effacing Jews, afraid of anti-Semitism, of being recognized as Jews. She sorely missed South Africa with its sunlit warmth, the tight-knit Jewish community and the comfort of her home there: and she became severely depressed. Though it is clear that she suffered a serious mental affliction – probably genetic – her life in England, after leaving SA, appeared to have triggered her bi-polar condition, eventually leading to suicide.

His father had been stern and distant throughout the writer's youth. He and his siblings – two sisters and a brother – grew up in these deeply disturbing circumstances.

Of course, as with most Jews of the Diaspora, Israel played a significant role in his life. He frequently visited cousins here. One of these cousins also suffered from manic-depression and she too had committed suicide.

Here the ongoing conflict between Jews and Arabs seemed to have been the trigger. He discusses the situation of this troubled land and compares pre-1967 Israel with the country which it later became. He shows how, before that war, humanitarian, socially-conscious, peace-seeking and conciliatory ideals were prominent.

After the 1967 take-over of the West Bank, Gaza and Sinai, a fresh strongly nationalistic spirit took command of this new nation; one that wished to expand and keep the conquered territories, seeing the Palestinians only as a hindrance and threat.

He observed ever-growing hatred, fear, greed, and – yes – racism. Here again the same Jewish people who had once been the victims had now become the aggressors.

He visited Italy where his uncle (his father's brother) had served as a dentist in the SA army during WW2. This uncle wrote a diary eloquently detailing his war experiences. Cohen visited and vividly described these places many years later. He also finds other relatives in Italy who had escaped the Holocaust and he tells their story too.

This family story is both disturbing and fascinating – one with which we as Jews, especially South African Jews, can strongly identify. It is written in magnificent prose and some parts almost beg a re-read.

However, it must be said that at times it is confusing, jumping forwards or backwards or going off at a tangent. But this does not detract from a deep and powerful piece of literature.