The Further You Go the Lighter it Gets 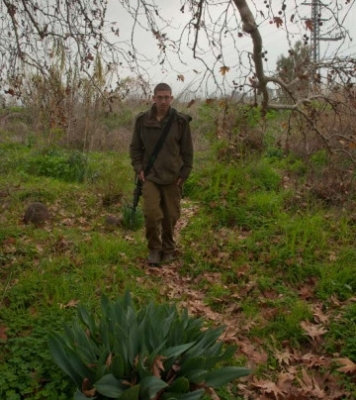 Leaving at 20:00, our soldier is going out into the unknown. The only known factor is that he will be going through three days of hell. "At least you know when it will come to an end," I tell him. In actual combat that would be an additional unknown factor to cope with. "In three days you will be home."

Today's weather forecast is on the 07:00 news. A heat wave is expected. I think of my son while driving to work in my 21ºC air-conditioned car. Add 20 to that and you get 41. Forty one is one of our worries after his first night out in the field. Only another two to go, countdown to their real test, a trek of 15 km for their right to earn their advanced training badge.

Forty one is still a heavy disturbing thought troubling the mind of my son. "Let's send him good thoughts," I say to my wife and two younger kids." Don't nudge Dad," they say to me. There is nothing much else I can do other than try calling Benny and demand that he send his chopper to pick him up. I doubt, though, that I could pull it off. This action probably has even less chance of succeeding than sending him good thoughts and vibes. Day to day worries about traffic and exasperating customers become irrelevant. These issues are now dwarfed by the worry of 41. Will he make it out of his three days in one piece?

Three days of hell. Thursday - D-day draws nearer and after only 20 hours of sleep in the last five days our soldier feels that he will make it.

My repetitive mantra to him was "the further you go, the lighter it gets." He weighs 70 kg so the additional 60% of weight from the equipment he carried over the 15 km trek makes it comparable to a 90 km hike, one that took Lior eight hours of pure mind over matter to successfully complete.

Our soldier, who is thankfully at home for a 10 day vacation, brings some relief to the stress of not knowing where he is and what hardships he is enduring.

Our good friends have just sent their son to the paratroopers' division and he has experienced a grueling first week of selections. The saying "helem Bakum" comes to mind. This is the shock of first recruitment. Thank goodness our family is over that (the first time around) after nine months of active training coming to an end, our eldest son will now be based up north on operational duties. He will be part of a functional team that has been given the tools for survival in an engagement far into enemy territory.

Fifty rocket attacks on Israeli settlements in the south

The reality of the fragile situation in the Middle East has once again honed in on my consciousness like a Samurai sword as 20 terrorists infiltrate from the Sinai and kill six innocent civilians on their way back from a vacation in Eilat, as well as a young soldier and the SWAT team commander. One of the attacks was on the 389 bus, the one Lior regularly takes on his way back to base.

This fact made us realize how fate can strike at any time. The terrorist's objective was to capture an Israeli soldier. I thank our blessings that our soldier was lucky since he was at home on his annual vacation.
North, two hours from Tel Aviv, but like another continent. Our northern borders need to be protected and upheld and somebody must do it. That somebody has a name, a sweet face and a good caring disposition.

My son, Lior.
I wish you strength.
I wish you unwavering faith in yourself.
Find the willpower to succeed when the odds are stacked against you.
Be a fierce fighter and learn the way of the sword, so that you never have to use it.
Be compassionate with your fellow human beings, even if they are your enemy.

And most of all Lior, my son, let the Lord protect you, keep you out of harm's way and send you home safely to your loving family.