The Desert in Bloom 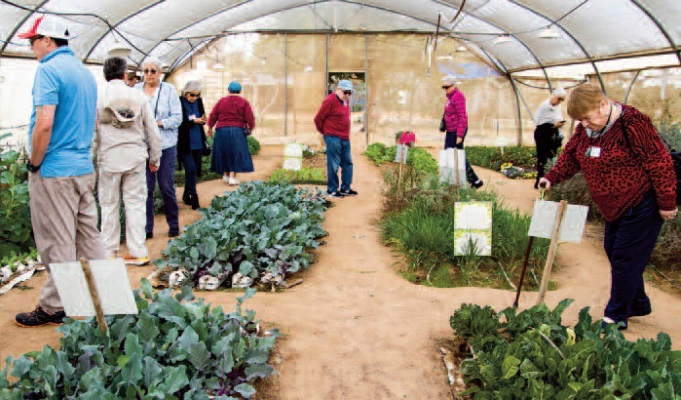 Touring the greenhouses at Talmei Yosef

As I write, sitting in perfect self-isolation in my Netanya apartment during the Coronavirus pandemic, the carefree days of mid-February seem a distant memory.

But there we were, ESRA Netanya's Negev in Bloom trip, setting out early on the morning of February 17, with an oversubscribed bus load of 50, and a waiting list of over 20.

After a couple of pickup points in Netanya, the bus stopped at Kfar Shmaryahu for people hailing from Herzliya, Kfar Saba and Raanana. Despite reaching Kfar Shmaryahu 15 minutes early due to the new 2+ lane on the Coastal Road, the eager trippers were all there waiting for us. It was 07.45 and the weather was already looking promising.

The long journey south allowed the bleary-eyed to continue with their slumber until reaching our morning coffee stop at the Dvira Junction.

Refreshed and back on the bus, I explained that this trip would concentrate on the unique flora of the Northern Negev.

As we drove south on Route 232, we sped past all the settlements of the Gaza Strip---Kfar Aza, Alumim, Be'eri, Magen, Nir Yitzhak, all of which had suffered rocket attacks in the last few years, until we reached our first destination, Talmei Yosef. 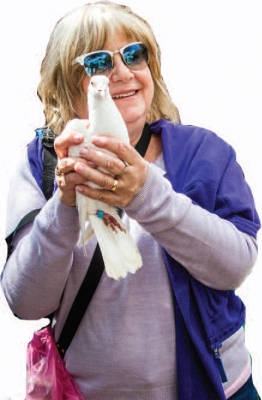 Coo, look at that ... Candy Bliss, one of the members on the ESRA trip, who were invited to race homing pigeons at Shvil HaSalat, a demonstration farm

Talmei Yosef is a moshav founded in Sinai in 1977 by a nucleus of South Africans. In 1982, It was relocated to the Habsor region of the north-western Negev desert near the Gaza Egyptian border after the original settlement's residents were evacuated following the Camp David Accords.In 2005, Uri Alon, a moshav resident, an agronomist and tour guide, opened an educational farm called Shvil HaSalat - the Salad Trail.

Here we were treated to an unforgettable experience-- a tour of the greenhouses, run by Uri and his wife, and guided by one of his professional guides. We were introduced to Israel's high tech agriculture, and saw how Israel's agricultural technologies allow over 80 different crops, primarily fruits and vegetables, to grow in the desert soil without pesticides. On the tour we encountered a wide variety of seasonal fruits and vegetables.

We visited the Herbal Greenhouse growing fresh green herbs. We saw all sorts of mint--- English, Egyptian, Israeli, Moroccan and Spanish. We touched, smelled and learned about edible flowers and lavender and their essential oils which are good for headaches, sterilizing cuts and inducing sleep when put on a pillow.

From there we moved on to the Tomato Greenhouse where we learned how tomatoes grow vertically. While previously they had grown to a height of two meters they now grow to three meters and are pollinated by large Brazilian bumble bees. While cherry tomatoes are the most popular, the growers have experimented with other varieties - cocktail tomatoes, black tomatoes and prostate tomatoes 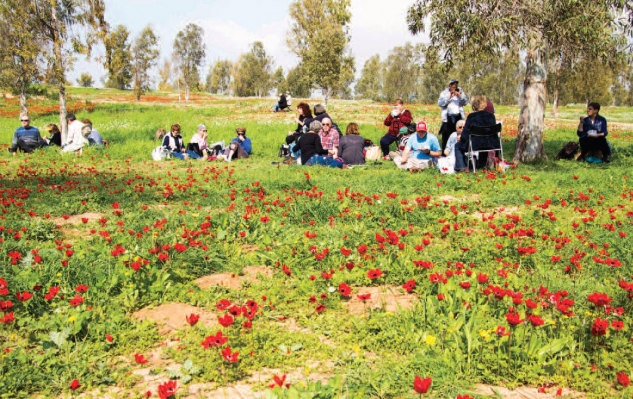 At the Field of Carrots we learned the history of the carrot, which originated in Afghanistan, and saw orange, white, yellow and purple carrots.

At every stop on the tour we could pick and eat the fruit, vegetables and herbs. We tasted the many different shaped and colored tomatoes, small peppers and cucumbers and even dug up the purple, white and yellow carrots. Shvil HaSalat is exclusively a demonstration farm and produce is not for sale. There are 10,000 visitors a year and a minimum entrance fee of 50 shekel. Uri and his wife, seasonal workers and guides are brought in as required to maintain the greenhouses.

Before leaving the moshav, we were invited to race homing pigeons, known as the Pigeons of Peace. On May 15, 1948, the Egyptians under Nasser attacked the nearby Kibbutz Nirim. There were 39 people in the kibbutz which was bombarded. They managed to hold off the advancing Egyptians for a day, but eight people were killed. They ran out of ammunition and used pigeon post to Tel Aviv, requesting supplies. These pigeons were a throwback to the ancient world's method of sending emails. We released pigeons in memory of the eight killed at Nirim. 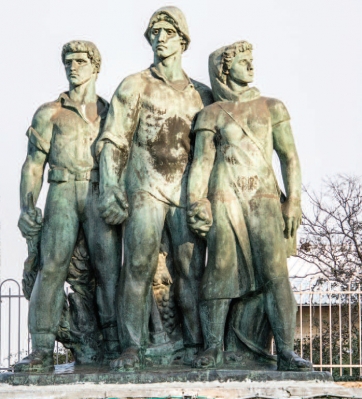 We ran out of time to visit the Greenhouse of Flying Strawberries but we were amply compensated by the gift of several boxes of freshly-picked strawberries to have with our lunch.

Back on the bus we headed back north, passing many sites with the Darom Adom Festival flags flying indicating sites suitable for viewing the red anemones. We stopped at Be'er Marva, a lesser known site. Much to the driver's consternation, he was directed to turn off the main road and drive a few kilometers down a narrow mud track. His face lit up, however, as we came to a small copse with the most beautiful profusion of wild scarlet anemones, which he said was the best display he had ever seen. With chairs and picnics unloaded, we set out our picnic blankets and sat down, taking care not to damage any of the flowers. Having sated ourselves with our picnic lunches and the delicious juicy strawberries from Shvil HaSalat, some hiked up the hill to investigate an ancient Ottoman well that had recently been renamed Be'er Marva after Marva Babian, a daughter of Kibbutz Alumim, who passed away in 2014 from a serious illness. Others walked among the carpets of anemones which bloom profusely for a few weeks in February.

Leaving Be'er Marva, we headed north, passing through Sderot and heading towards Kibbutz Negba. On the way I related stories of the War of Independence, the Egyptian advance north as far as Ad Halom Bridge and their turning back on June 2, 1948, eliminating settlements through which they passed. The situation seemed hopeless. Negba was surrounded by thousands of Egyptians. The Palmach Negev Brigade came from the east with fast moving jeeps and ambushed the Egyptians to save the kibbutz. On June 11 there was a first ceasefire with the Arabs but on July 12 the Egyptians tried again to attack Negba. This time the Givati Brigade sent their jeeps, the "Samson Foxes". Uri Avneri, one of their fighters, wrote a poem about them which became a famous song "Shulaei Shimshon''. Negba became a symbol of heroism that stood against the Egyptian army.

At the entrance to Kibbutz Negba we visited an open museum in the form of a full-sized reconstructed model of a tower and stockade settlement where we were regaled by the local guide, to the intriguing story of Negba. It was established in 1939 as part of the tower and stockade enterprise, and situated on a hill that could be attacked from all sides. We were shown a wonderful film of original footage from the time of the establishment of the kibbutz. The film was produced and directed by a Neil Wingate. I have been unable to establish if he was a relation of Orde Wingate; can anyone throw any light on this?

We visited the small cemetery of those who fell in the defence of Negba. An impressive memorial by Natan Rapoport stands in memory of the heroic battle of Negba which represents the community pulling together. The importance of Negba is its part in the War of Independence.

Our final stop at Negba was Givat Tom V'Tomer, a biological garden planted in memory of Tomer Keidar, a son of the kibbutz, and his friend Tom Kitain from Neve Shalom, both of whom were killed on February 4, 1997 when two Sikorsky helicopters collided over She'ar Yishuvin northern Israel, killing 73 IDFsoldiers.

At the entrance to the memorial is an electricity pole with 73 doves painted on it by Yoav Keidar, the father of Tomer. The memorial is comprised of a garden of trees which grow in Israel, a dream-project of Tomer's, started with his father with the help of his friend Tom. Yoav Keider continued the project after his son's death and planted Pistachio trees from the Galilee / Golan and a grove of trees and plants indigenous to Israel, including fig, shikma, rotem, sabra, shitta and zaqqum. In the middle of the garden there are large stones on which to sit and a memorial plaque for each of the two sensitive boys who pursued peace. Following a path, there are plaques listing each of the 73 soldiers killed in the accident, information about each tree with biblical quotes. With music playing in the background, the memorial is very emotive.

The sun was setting; the day had passed too quickly and there was still a long journey home. We headed back up the road, thinking of our day in the Negev. It had been a very interesting, enlightening and emotional experience.

Stephen Kliner, a lawyer from Glasgow, Scotland made aliyah in December 2012 and has reinvented himself as a licensed tour guide in Israel.