The Aaronsohn Saga - A Review 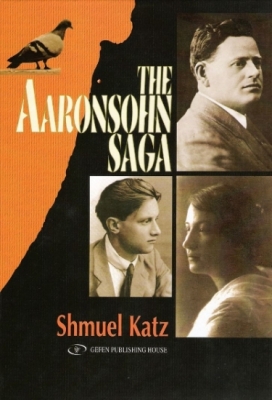 Let's see a show of hands, all right? Would everyone who has ever heard of Theodore Herzl please raise their right hand? Okay, thank you. And now, Chaim Weizmann… hands up, please. Excellent. Ze'ev Jabotinsky? Good, good. Henrietta Szold? Thank you. Aaron Aaronsohn? Aaron Aaronsohn? Anyone? No one? Well, don't be embarrassed, you are in good company. This extraordinary man respected in his time throughout the world, and who fought tirelessly for the return of the Jews to their ancient homeland and the creation of a sovereign, independent Jewish nation has been largely forgotten by history.

The inexplicable and undeserved obscurity of this important historical figure is about to change, however, with the recent publication of The Aaronsohn Saga, painstakingly researched and written by Shmuel Katz. Katz, author of Days of Fire, the popular account of the Irgun and its role in the birth of the State of Israel, now sets his high on an equally pivotal time – World War One and the end of Turkish rule in Palestine – and sheds light on an almost completely forgotten key player in the events of those times. Katz's book comes at an opportune moment for both a better insight into such current issues as "final status negotiations" and the drawing of final borders, as well as a fuller, clearer understanding of some of the defining events that have shaped our history.

When it comes to the study of recent Jewish history, one might argue that we are now in a "post-modern" phase. The big stories have all been told, and the main outlines of the past century and a half are quite well known. What we have left are subtexts and small narratives, along with Revisionist studies that try to challenge conventional wisdom. In the study of the Holocaust, for example, one could argue that the central, main and authoritative books which tell the story of the florescence of anti-Semitism in post-World War One Germany, the rise of the Nazi Party, the disenfranchising of Germany's Jews, the Nuremberg Laws, Kristallnacht, the mass murder of Jews during World War Two, and the post-war aftermath have already been written and widely read. What we have now is the publication of much smaller narratives by Holocaust survivors, children of survivors, children-in-law of survivors and writers focusing upon one specific aspect of the Holocaust or supplying bits of previously unknown information. Although smaller in scope and less definitive of the period as a whole, these latter-day narratives are nonetheless important as they enrich our knowledge and understanding of the Holocaust, provide fresh information, and clarify or even contradict what we thought were facts.

This is true not only of the Holocaust, but also of the history of modern Zionism and the founding of the Jewish State. With them are narrative – from the Russian pogroms of 1881 and the organizing of the First Aliyah through to the 1948 War of Independence – already told and retold form a variety of perspectives, what we have now is the appearance of new books telling a wide array of fascinating, if smaller stories. The Aaronsohn Saga presents us with the biography of a seminal figure whom history somehow passed by. Katz's intricate and highly detailed biography presents a man. Aaron Aaronsohn, who appears to have been as instrumental as anyone else in putting the Jewish case for a sovereign homeland on the world's political agenda, but one whom the world has forgotten.

As narrated by Katz, Aaronsohn was born in Bacau, Romania in 1876 and was six when his family immigrated to Eretz Yisrael in 1882. His father, Ephraim Fischel, was one of the founders of Zichron Yaakov.

After studying agriculture in France and returning to Zichron Yaakov to establish an agricultural laboratory, Aaronsohn burst upon the stage in 1906, barely 30 years old, with his discovery of the "mother of wheat". Long sought after by botanists and archeologists, this was the wild wheat first cultivated in the ancient Near East, which led to the invention and spread of agriculture. Aaronsohn found a swath of wild wheat, Triticum dicocoides, growing on the eastern slope of Mount Hermon, which he believed had led historically to the strain of emmer wheat grown in the early Neolithic period.

This discovery and his articles in European journals gained him scientific acknowledgement and fame. In 1909, he went to the USA at the invitation of the American Ministry of Agriculture. He toured the country, learned English with lightning speed and networked extensively. With the support of such wealthy and influential Jews as businessman Julius Rosenwald, Supreme Court Justices Louis Brandeis and Felix Frankfurter and Henrietta Szold, founder of Hadassah, Aaronsohn returned home and founded an agricultural research station in Atlit where he built a rich library, collected geological and botanical samples and inspected crops. In what was to become a bitter break with mainstream Zionist ideology, Aaronsohn employed Arab workers at the research station and strenuously promoted their employment or Jewish farms. This led to a serious dispute with the Yishuv – the Jewish population of Mandate Palestine – whose Jewish laborers and teachers believed that they should cease to be dependent on Arab workers and guards. Katz portrays this incident, in which Aaronsohn took an unpopular position and adamantly refused to budge, as the first in a long sequence of dramas that were to pit him against the majority of the Holy Land's Jewish settlers.

As the First World War began, Aaronsohn joined a small committee to help the residents of the war-torn country. In 1915, through his connections to wealthy and influential people in the United States, he distributed American financial assistance to the Yishuv. But it was a huge swarm of locusts that same year that was to set Aaronsohn on a path that lasted to the end of his life. Aaronsohn was assigned by the Ottoman authorities to fight the locusts in the Yishuv and Syria. The corruption he encountered during his work with the Ottoman officials, along with their expulsion of Jews from Jaffa and Tel Aviv, convinced Aaronsohn that the future of the Jews in Eretz Yisrael depended on the Yishuv's total liberation from the Ottoman Empire.

Thus, with his assistant Avshalom Feinberg, his sister and other members of their families, Aaronsohn organized a secret intelligence group called NILI (Hebrew initials for Netzah Yisrael Lo Yishaker – "The eternal one of Israel will not be false"). The purpose of the group was to aid England in its war against the Ottomans. NILI assisted in the conquest of Palestine by British forces under General Edmund H.H. Allenby by supplying information that proved crucial in planning the British invasion. In particular, it was information provided by NILI that gave Allenby the means to attack by surprise through Beersheva – using Aaronsohn's detailed map of the location of water sources – thus dodging the strong Turkish force that was blocking the British army's advance north from Gaza.

In 1916 Aaronsohn visited London, where he circulated a memorandum, which argued the case for a sovereign Jewish state. This memorandum helped make the idea of a "Jewish National Home in Palestine" part of official British policy in Near East.

In 1917, Chaim Weizmann sent Aaronsohn on a political campaign to the United States. While there, Aaronsohn learned that the Ottoman authorities had managed to intercept a NILI carrier pigeon, leading to the arrest of his sister Sarah. After being tortured in her home – all the while refusing to give up the names of other NILI members – she asked to be excused to go to the toilet where a revolver was hidden. Sarah shot herself, a heroic suicide at age 27.

In the spring of 1918, Aaronsohn returned to Palestine as a member of the Zionist Commission. H e was a member of the Jewish delegation to the 1919 Paris Peace Conference. On May 15 1919, Aaronsohn was killed in an airplane crash over the English Channel. Katz relates how the circumstances surrounding the crash were unclear and, at the time, quite controversial, with finger to blame pointing in several directions – most notably, to the British government.

Aaronsohn left no children behind to tell his story or commemorate his life. So utterly driven was he to prove that the desolate land of Israel could once again bear fruit and serve as the home for a modern Jewish state that Aaronsohn never married or even seems to have become involved in a viable romantic relationship.

Those searching for a comprehensive understanding of Zionism, World War One, or the early days of the Yishuv in Israel are not going to find it in The Aaronsohn Saga. This book is nothing more or less than what it purports to be – a detailed, intensively researched and annotated biography of one man. Some will enjoy Katz's close-up anecdotal narrative style, while others will not. Everyone, however, is certain to be grateful to Katz for shedding light on the life of a long-forgotten but pivotal figure in the creation of a Jewish state in the homeland of the Jewish people.