The woman who was shot and killed trying to protect her rabbi at a synagogue during Pesach in 2019 has been remembered in her home city.

Lori Kaye – who a few months before the tragedy visited Israel and made a donation to ESRA Modiin – has had a street named after her in Poway, California. 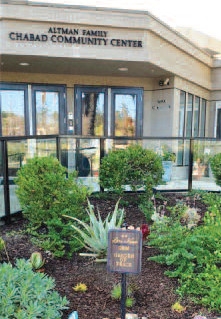 The Chabad Community Center, San Diego, now has bulletproof doors. The garden in front has been dedicated to Lori Kaye.
And a seat has been dedicated in her name at the city's Poway Lake following a campaign by Jane Cohen.
Her friend, Amilia Lev, of Modiin, said: "The street is called Lori Lynn Lane – the family wanted her middle name used rather than her surname."
The Chabad Community Center, San Diego, where the shooting took place, has now been fitted with bullet-proof doors, and the grassed entrance is called Lori's Garden

Amilia (right) seated on the bench at Poway Lake dedicated to Lori. With her is Jane Cohen who campaigned to have the seat installed
PRINT