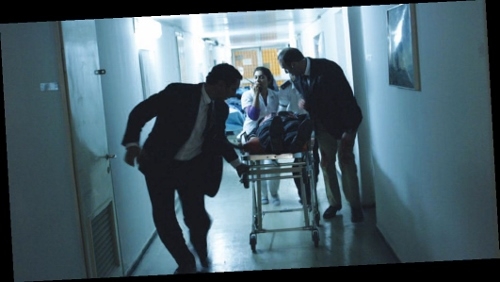 A re-enactment of the moment when shot Israeli Prime Minister Yitzhak Rabin is rushed into hospital ... a scene from the new docudrama Rabin, the Last Day

On the evening of Saturday November 4, 1995, my family arrived home after spending a really enjoyable Shabbat with a group of friends in a field school in northern Israel. The glorious weather meant we'd been able to go on a couple of long walks in the beautiful countryside.

It had been a lengthy car journey back to Raanana and we were all pretty exhausted by the time we got home. My children, who were then aged twelve, nine and seven, went to their rooms to get ready for school the next day and my husband popped into our neighbor's house to return a guidebook we'd borrowed for the trip.

He came back through the front door a few minutes later and called out: "Yitzhak Rabin's been shot. Quickly, turn on the TV."

It was announced soon after that Rabin was dead. We spent the next few hours watching the breaking news, numb with disbelief.

Amos Gitai's new film, Rabin, the Last Day, takes us back to that terrible time, mixing archival footage of the peace demonstration in Tel Aviv where Rabin was murdered with dramatized scenes of him being taken to hospital and the desperate attempts to save his life.

The film has a lengthy re-enactment of the Shamgar Commission, the official inquiry set up to investigate the security failures that led to the assassination. We hear evidence from, among others, the police, Shin Bet, and Rabin's driver, the latter unable to explain why the short drive to Ichilov Hospital took eight minutes. We see Yigal Amir (played by Yogev Yefet) preparing himself for the assassination, and his interrogation afterwards.

The commission was not required to investigate the threatening atmosphere that preceded the murder and what effect that had, so Gitai essentially conducts his own inquiry in the film. It is clear whom he holds partially responsible for the murder, in addition to the security services that failed the prime minister that night: belligerent settlers and fanatical rabbis who cursed Rabin for giving land to the Palestinians, and right-wing politicians who made no attempt to condemn the ferocious incitement against him.

The murderous intent that was felt towards Rabin is shown clearly in actual footage from the time. Indeed, the signs of a looming catastrophe were there just a few weeks before the assassination at "The Event", a large social gathering of English-speaking immigrants that my family and I attended, arranged by ESRA and other organizations. The guest of honor was Yitzhak Rabin.

Before he came out to speak, there was the usual Israeli-style singing and dancing. Then he appeared and the atmosphere changed completely. The seemingly friendly American man, who moments earlier had been giving out balloons to children and playing cheerful tunes on his trumpet, started blowing ear-splittingly to drown out any efforts Rabin made to speak. There was shouting and jeering. He was called a murderer and traitor and told to go home.

I was standing right at the front of the crowd, trying to shield my nine-year-old daughter from this vitriol. I caught Rabin's eye and gave him a thumbs-up sign and clapped. Although he was getting agitated, he waved at me.

After he left, a group of Americans came and admonished me for not jeering at Rabin.

"He has blood on his hands!" they cried.

"This is a family event, not a political rally, and he's the prime minister. I was just showing him some respect," I said.

We nearly came to blows as they verbally attacked all of us who had tried to listen to the speakers, none of whom had been able to make themselves heard above the jeering. By now my daughters were crying and my 12-year-old said: "How could they treat Mr. Rabin like that? Do you think someone will try to kill him?" I tried to reassure her that while his life might be in danger, the threat was not from here in Israel.

The public curses and the posters of Yitzhak Rabin in Nazi uniform – in short, the blatant incitement – did not escape even my own young children. After the assassination, my seven-year-old son asked whether all the people who had jeered at The Event would be pleased. It was a shocking yet understandable question, given the sheer venom he had witnessed just a few weeks earlier. 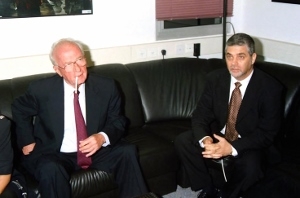 Shimon Sheves, the director of Rabin's office from 1992 to 1995, said in a recent radio interview that Rabin had found The Event particularly upsetting. One of the most poignant moments in Gitai's film is a clip of Rabin saying, "I feel good and safe among the Israeli people, even if there are negative elements. I went through enough in my military service not to be afraid of such things." Perhaps he was shocked by the reception he had received from a crowd of English speakers, as he hadn't counted them among those "negative elements".

We can't know for certain how history would have panned out if Rabin had not been murdered. He may have lost the next election because of the terrorism that followed the Oslo Accords. Indeed, his fellow Nobel peace laureate Shimon Peres was defeated by Benjamin Netanyahu in the election that was held a few months later amidst a horrific wave of terror attacks.

In an interview on CNN, Amos Gitai said his film is not a sentimental look at what might have been. "It's about when you are stuck in the present, you should look back to the past," he said. "Maybe it will give you an idea for the future."

Whether one supported Rabin's policies or not, all Israelis should mark the day their democratically elected prime minister was assassinated. The threat Israel faces is an existential one, Prime Minister Netanyahu has informed us, many times. While it is right to warn the world about genocidal incitement against Israel, we need to remember and learn from the incitement right here at home, that led to that dark day in November, 20 years ago.