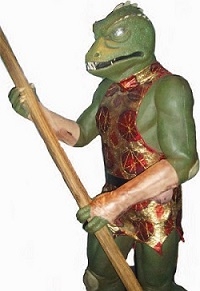 Star Trek fans will recognise this as a Gorn Photo: Kevin T, Flickr.com

Blessed are You our God, King of the Universe, who has provided me with all my needs.

To me, this Shachrit prayer is "The Gorn Prayer"; it's one of my Rosh Hashanah favorites.

You've never heard of it? Please allow me to share.

The Gorn are well known among Star Trek aficionados as huge and physically powerful reptilian creatures. In an episode entitled "The Arena", Captain Kirk and a Gorn Captain are transported to a barren asteroid and told they must fight each other to the death. They are told the asteroid provides all the resources they need to prevail.

Kirk, who is physically weaker, becomes desperate. There are no weapons on the barren terrain, just scrub brush, rocks and mineral deposits.

But, wait! As he prepares to die, he remembers an ancient explosive called gunpowder. With his last strength, he loads a hollow plant stem with potassium nitrate, sulfur and diamonds, tamps down with a stick, uses a patch of cloth and piece of metal to ignite some coal, and … BAM! He blows away the mighty Gorn.

At Rosh Hashanah, we commemorate the creation of Adam and Eve, who truly were provided with everything but just couldn't leave well enough alone.

The Adam and Eve story is the antithesis of the Gorn story. Without any thought or work, they had fully prepared meals, luxury housing and no need to shop for clothing. And they blew it.

In Israel, we are closer to The Arena than the Garden of Eden. We are on inhospitable terrain. Figuring a way out of difficult situations is just what happens in daily life.

When things get tough for me, I say the Shacharit prayer and visualize the Gorn. It's my reminder that all the resources I need are here; I just need to recognize them and figure out how to use them. Thankfully, it works.

Thus, in Israel on Rosh Hashanah, while I may commemorate Adam and Eve, I am far more aware of the gift of the Gorn.

To me the Gorn prayer is a Yishuv prayer: We returned to a barren land and developed agriculture. It's an IDF prayer: We learned to fashion weapons and prevail against overwhelming odds. It's a Start-Up Nation prayer: When there were no natural resources, we invented "un-natural" resources.

But, hey - they got evicted from their home. We're still here.