Six Day War: Old Rifle was Thrust Into My Hands 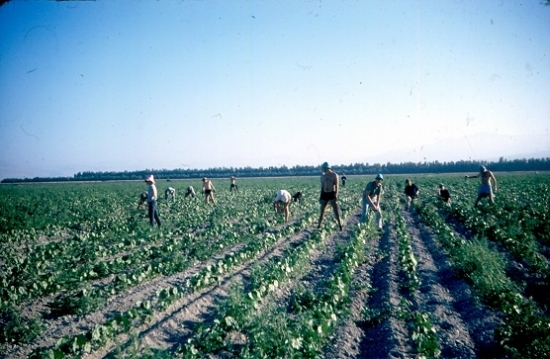 Weeding cotton at Ma’ayan Baruch during the Six-Day War

I think it's fair to say that for the majority of volunteers who came to Israel in the summer of 1967, it was an experience of a lifetime. That was certainly true in my case, and I share wonderful memories with young people from all over world.

I was a member of a contingent of Southern African volunteers – South Africans and Rhodesians – who ended up on Ma'ayan Baruch, a kibbutz on the Lebanese border. We worked really hard and with dedication, if for no reason other than to prove to ourselves that we could do so despite our privileged backgrounds.

I remember in particular receiving the accolades of the kibbutz members after spending four nights moving upwards of a thousand young hens from the batteries where they had been raised to the laying cages, and subsequently cleaning out the batteries, a job generally considered to be one of the most arduous and filthy on the kibbutz roster.

However, what set our group apart was the fact that we were the only group to arrive in Israel before the start of the Six-Day War, so I'm going to confine myself to recollecting events immediately prior to, and during, the war itself.

On May 23, 1967, I found myself, along with other graduates of the Jewish youth movements, at the Habonim "bayit" in Johannesburg. The picture painted of the situation in Israel was bleak. The Egyptian blockade of the Straits of Tiran the day before had effectively shut off Israel's supply of oil. They had expelled UN peacekeepers who had been stationed in the Sinai Peninsula since the Suez conflict in 1956, and had amassed their heavy armor and tanks in Sinai on Israel's southern border. Likewise, Jordanian and Syrian forces had been mobilized to the east and to the north of the country.

War was inevitable and Israel was calling for volunteers to assist in maintaining essential services in the wake of a general mobilization of civilian reserves to the army. While my association with the Bnei Zion and, subsequently, Habonim movements had been more on a social basis rather than a strongly ideological Zionist one, I had little hesitation in throwing my hat into the ring. To their credit, my parents raised no objections.

On the evening of Saturday, June 3, 1967, eighty or so of us volunteers arrived at Jan Smuts Airport in Johannesburg for a special El Al flight to Israel. The then small departure lounge was packed with some 10,000 people who had come to see us off. Emotions ran very high. We were going into a potentially life-threatening situation and, as melodramatic as this may now seem, we were even prepared to give our lives for the security of the adolescent Jewish state.

I have a clear image of us standing at attention on the tarmac before entering the plane to sing Hatikvah. We solemnly followed this with the South African anthem, Die Stem. After all, we were not simply volunteers – we were Southern African volunteers in the true spirit of others who had gone before us to Israel, like the South African pilots who had helped Ezer Weizman build the Israeli Air Force in 1947 and 1948.

When we arrived in Israel on the morning of June 4, fifty of us, a largely Habonim contingent, were taken immediately by bus to Kibbutz Ma'ayan Baruch in the north on the Lebanese border. There we were met by Leib Golan, who had been a Habonim emissary to South Africa a few years earlier, and were assigned our bungalows.

At the meal that evening we were struck by how few adult men there were in the dining room. In fact, all but seven of the kibbutz men were already serving on the borders.

The next day, we were awoken at 4am and started working in the orchards close to the kibbutz itself. The farther flung fields were directly under the Syrian gun placements on the Golan Heights and so were effectively out of bounds.

At 6am, Mony, one of the South African founders of the kibbutz, came to call us to enter the underground shelters. War had broken out. Almost immediately after entering the shelters, mortar shells started landing on the kibbutz. Although we didn't know it at the time, no significant damage was done, but there, stuck underground with the sounds of war above us, we faced a reality far more frightening than we'd ever imagined.

The three kibbutz members who were there to supervise us in the shelter brought a powerful radio with them so that we could follow the news, which they translated for us from the Hebrew.

The first news reports announced that the Israeli Air Force had destroyed 50 Egyptian war planes on the ground, effectively wiping out Egypt's capacity in the air. Furthermore, Israel's air supremacy had enabled us to destroy more than 200 Egyptian tanks in Sinai. It sounded incredible – so much so, that we thought it was merely Israeli war propaganda. But as history shows, that was exactly what had happened. The war in the south had been all but won in those first four hours. However, the country remained almost totally exposed on the eastern and northern fronts.

Being the only volunteer who had had some military experience, I was assigned that first night of the war to stand guard duty with four kibbutz members in an observation post about 100 meters beyond Israel's northern border with Lebanon.

To put our defense capabilities in perspective, the weaponry on the kibbutz comprised one heavy machine gun, seven light machine guns and an assortment of antiquated rifles of World War I vintage, one of which was thrust into my hands. To this day, I doubt whether I would have had the strength to pull back the bolt if needed!

At 2am, Leib, who was in command of the outpost, advised me that I had to return to the kibbutz because word was out that the Syrians were bringing tanks into Israel through Lebanon.

I remember, as if it was yesterday, telling him that there was no way that, without Hebrew, I was crossing back over Israeli lines and I would rather take my chances with the Syrians. I pulled the British army helmet over my eyes, stuck the Mauser with fixed bayonet in the air, and huddled in the back of the trench. I don't think I even blinked once over the next few hours before sunrise.

The Syrians never came but they could well have done so. I believe to this day that the reason they did not is that they thought the Israeli forces were waiting to ambush them on the kibbutz.

After all, from their positions on the Golan Heights they would have seen two busloads of young men arriving on the kibbutz the day before. Little did they know that we were merely a bunch of civilian volunteers.

I woke up later that morning with such a splitting headache I could hardly see. It must have been a 24-hour virus. This led to the saga of Big John and Li'l Al – no, I'm not talking about two characters from Little House on the Prairie – but of how John Eliasov, half bent over in the trenches, carried me across his shoulders 500 meters to the first aid bunker where I was attended to.

Given our relative sizes, I would definitely not have been able to reciprocate his feat had our situations been reversed.

The war was still far from over. The Israeli forces had transferred the action to the Jordanian border, and there followed the dramatic liberation of Jerusalem.

That Wednesday night we heard the broadcast of a concert given by the Israel Philharmonic from the campus of the Hebrew University on Mount Scopus, which had been in Jordanian hands since 1947.

The concert started with the singing of Hatikvah by the choir of the Philharmonic. There wasn't a dry eye amongst us. We cried like babies with joy and pride.

The war continued for another two days in the north, and the acrid smoke of munitions from the battle for the Golan Heights hung over the Hula Valley till the Saturday morning. The war was over.

When the smoke cleared, we were both amazed and moved to witness a convoy of more than 100 Israeli army trucks ascending into the Golan Heights carrying food, water and medical supplies to the Syrian populations of Kuneitra and the surrounding villages. Of all the impressions of the war, this for me is the most abiding one.

Israel had proved itself once again to be capable of not only extraordinary military successes in the defense of its people, but also of showing extreme humanity to its vanquished enemies in a manner befitting the best of Jewish traditions.

This was the moment that galvanized my resolve to one day be part of this society: 12 years later, my wife, who had also been a volunteer, and I were an integral part of the South African "garin" that founded the village of Manof in the Segev Bloc, subsequently Misgav Region, in the Western Galilee.