Apr 14 Posted by Anthony Green in Life in Israel 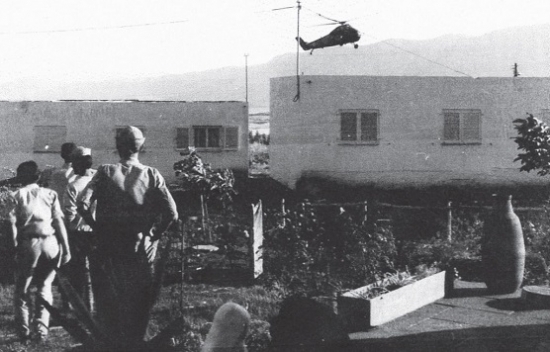 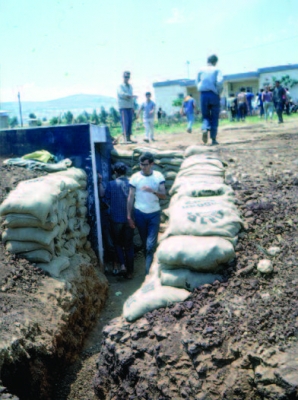 Entrance to the Ma’ayan Baruch shelter

The dramatic photos shown here were taken during the Six‐Day War and are being seen for the first time. They were taken at Ma'ayan Baruch, a kibbutz established in 1948 by, amongst others, a garin of Habonim members from South Africa. The color shots were by Mike Kahn, an architecture and town planning student at the time, and Meish Arenson, who captured dramatic scenes in black and white.

Phil Bloom recalls: The photo of the helicopter over Ma'ayan Baruch is important. We would follow the news on the BBC as our Hebrew was not good enough to listen to Kol Yisrael. They quoted Syrian sources saying that the Galilee had been overrun by their forces. We believed, or were told, that the helicopter was sent by the army‐air force to reassure kibbutzim and towns that the report was just propaganda. True or not, it sure was reassuring. Phil explained that over the years since the establishment of Ma'ayan Baruch, a few of those ex‐Southern Africans came back to Rhodesia and South Africa as emissaries. Also, winter and year‐long Habonim youth leadership programs in Israel organized for overseas volunteers had spent their kibbutz period at Ma'ayan Baruch. So this was a strong and deeply rooted relationship – surely one good reason some of us have kept up contact ever since with them, added Phil.

Of the photos, Phil commented: Mike Kahn and Meish Arenson amazingly had the presence of mind and sense of history even when going off to war to bring their cameras and use them to record the events.

Syrian shells landing near Ma’ayan Baruch . . . a photo taken from the entrance to the kibbutz shelter 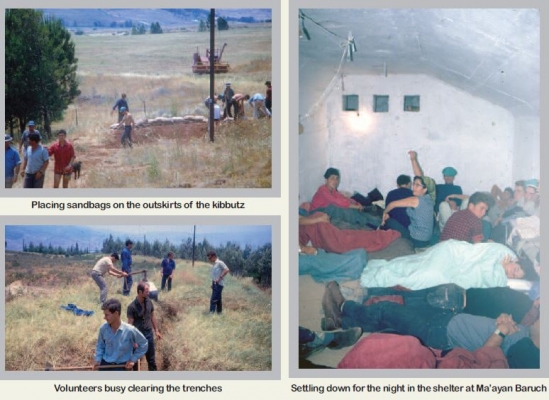