I come from a singing family. We've always sung, especially in the car. Both my parents had good voices and loved to sing. My mother had a sweet soprano that would have been very good had she had lessons - but she had no conception of indulging in singing lessons. Singing lessons were for people who were going to be professional singers and none of us thought of ourselves as having that potential. My sister Edith also had a lovely voice and could sing much higher than me.

My grandfather also sang. He was a cockney and taught us songs from the First World War - Tipperary, Someone's in the kitchen with Dinah, Pack Up Your Troubles, and She's Only a Girl in a Gilded Cage …He had a wonderful tenor voice, and together with my Uncle Alec and aunts, we could put on a spontaneous choral harmony as good as any Barbershop group.

It was the singing that above all gave our Seders their unique flavor and made them the highlight of our year. Later when there were in-laws at the table, they also contributed so that we'd sing late into the night, long past chad gad yo and echad mi yodea, the traditional Seder songs, to music-hall and operettas by Franz Lehar to the early musicals like Oklahoma. My Zaida would sing a funny version of Finiculi, Finicula about a man who sat on his hat; Uncle Alec would do a remarkable rendition of When the Red, Red Robin goes Bob Bob Bobbin Along …and dad would sing Old Man River and bring tears to our eyes. My mother loved Ve-ulai - the haunting song by our poet, Rachel, and as she neared the high point of the song, we'd stop breathing in anticipation - would she manage to reach the note this time?

You could say that all my best family memories are bathed in music and fill me with nostalgia. 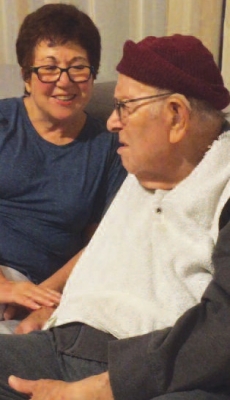 Jock Falkson with his daughter Sharon

My father always had a song on his lips, both when he was happy and when he was sad.I remember when, at my Bobba's funeral, he hummed unselfconsciously while accompanying her coffin on her last journey.It was his way of mourning.Other people cried, but Dad sang and he didn't mean this to be irreverent.

In the last years of his life, my father and I shared the common experience of widowhood. First my mother died and then a few years later my husband died and when my daughter returned to live in South Africa, Dad and I found ourselves alone in Israel, with no relatives except each other. Fortunately, we'd had the good sense to buy apartments in the same building, so we were nearby and accessible and could support each other.

When my Dad grew old, he lost his eyesight and his hearing, and he became seriously constricted. After a few bad falls, he lost his confidence in walking and gradually his living space became smaller and smaller and emptier and increasingly sterile. This was a terrible fate for my Dad who had been a voracious reader and who had learned to use the computer and had relied on this tool to keep him connected to the outside world.

Surrounded by images he could only vaguely see and sounds that confused and irritated him, he became increasingly withdrawn and out of touch. When I took him to a gerontologist, he was diagnosed has having dementia.I suppose he did have dementia, but I think that what he mainly suffered from was sensory deprivation and isolation.

As Dad's companion and main carer, I was challenged to keep him connected.I visited him throughout the day and tried to have conversations with him. Usually we talked about the past and although he thought he couldn't remember anything, one prompt led to another and we would spin out a story … about his old business… his days in the Zionist Youth, about his parents and their first house in Harrison Street in Cape Town, and about his days singing in the Gardens shul choir, which he joined because, as he gleefully told me, the choir boys were paid pocket money for their participation! 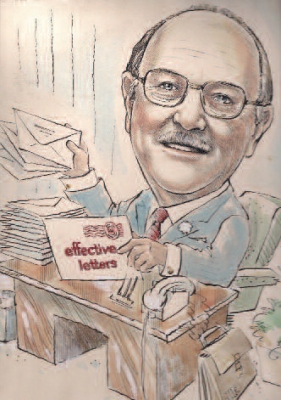 Often our conversations would remind Dad of a song, and he would start burbling a melody and fragments of words that he remembered. As time went on and his life grew ever more restricted and it became harder and harder to break into his dreamlike existence, I began to use singing consciously to connect with him.

We sang all the old songs; a kind of ritual developed around them. First my Zaida's songs … then I would say, "What was that song that Aunty Molly used to sing?" And he would, with a little encouragement, break out with "Only a Bird in a Gilded Cage". And Mommy? And we would sing Ve'ulai… and Arum der Fyre … And "was there a song that Bobba liked?". He would ponder on this and then start singing the Communist anthem, and we would laugh delightedly because wasn't it funny that he should think of that? No matter how dull he'd been just a short while ago, if I started singing, "Daar kom die Alibama" he would spontaneously sing with me. And sometimes I would pull him out of his chair and dance with him, too.

Eventually Dad needed a permanent caregiver to live with him. While Blayne was the most wonderful, kind and loving companion, I knew that it was difficult for him to have conversations with Dad. He was not Dad's equal educationally, and Dad had lost interest in other people's worlds.There was little Blayne could offer by way of conversation.

So, I created a playlist of songs that Blayne could play on the television, which ran for about thirty minutes. It had songs in English, Hebrew, Yiddish and Afrikaans. Even when Dad was not in the mood to listen, Blayne would put the recording on in the background and before long, Dad would start singing.When Dad grew agitated and frustrated, Blayne could sooth him with these songs - and on more than one occasion when there was a bad mood between them, he could distract him by singing with him. (Yes, Blayne learned all the songs!) He too learned to switch Dad on, singing with him.

The amazing thing was that although Dad could not remember what he ate five minutes previously and often had trouble remembering who Blayne was … he remembered the melodies and songs from the old days, perfectly. Imagine! He could sing Die Stem, the South African anthem, in Afrikaans, from beginning to end without hesitation. And incidentally, he could also recite poems by Robbie Burns with a convincing Scottish accent and Afrikaans ones by Totius, that he'd learned at school.

Dad was left with only the vaguest notions of his relatives.He would sit slumped in his Lazee-boy armchair, lost in his own reveries - or as he would say when I asked, "What are you thinking?", "Nothing.I have absolutely nothing in my head."

But when he saw me come into the room, his whole face would light with pleasure in anticipation of something good. The last memory I have of him at home, when he was distressed and in pain because his internal organs were shutting down, is of my brother, Blayne and myself, lying on the bed with him, singing "Old Man River".

Morris Bacher, Sharon's father, was ESRA's first chair of finance, a member of our first ESRA Steering Committee. It was he, who from the very first ESRA newsletter, actively introduced advertising – he conceived the idea and the need and himself went out to get the advertisers. I remember him well, and am ever grateful to him. Merle Guttmann