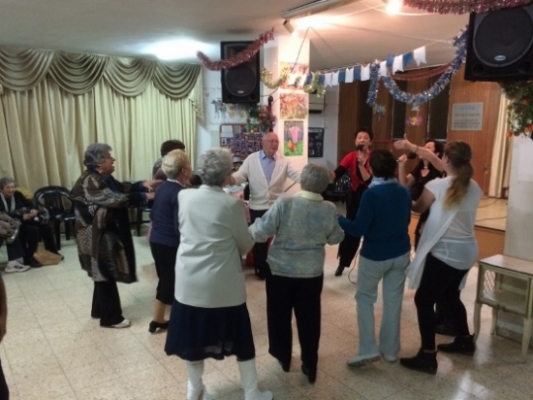 The Russian aliyah that began in earnest in 1989 brought a million high-level, well-educated and intelligent new citizens to Israel. Tens of thousands settled in Netanya where Rabbi Dr. Ervin Birnbaum, a child survivor of the Shoah, was then serving as rabbi of Congregation Bet Israel, the city's only Masorti synagogue. Many of these immigrants had advanced technological skills; others had enormous musical talent.

Birnbaum shares an anecdote in his new book, Turning Obstacles into Stepping Stones (Maarechet Publishing House, Kibbutz Dalia, 2014), about a mother and a Yiddish-speaking grandmother who sought him out shortly after their arrival in Israel. They and the granddaughter had enrolled together in an ulpan. The granddaughter had also begun looking for a job, to no avail. She was approached by two sympathetic people who offered their help, met with her daily, invited her to their homes, to meet their friends, to go out with them and to participate in discussions. This lovely twenty-two year-old woman had just come home and announced that she had converted to Christianity. She obviously had not realized that her new friends were missionaries, since neither she nor her mother had had any Jewish education under the Soviet regime. The grandmother pleaded with Rabbi Birnbaum, "Is this why I came to the yiddishe medine, to lose my only granddaughter to Christianity?"

Rabbi Birnbaum explains that at that moment he gained a crystal clear understanding of why God had allowed him to survive the Shoah and had brought him to that point in time. He felt a need to dedicate himself to these olim, to bring them back to our people and to make them understand the beauty of belonging to the Jewish nation. 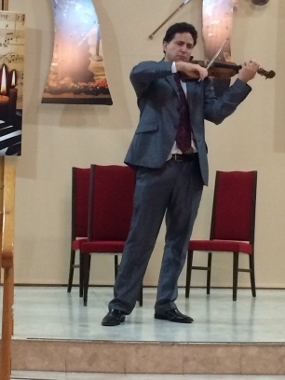 After doing some research at the city level, Birnbaum decided that a two-pronged approach was needed to help these olim: economic and spiritual/educational. He learned from then Mayor Elroy that of the first 30,000 Russian immigrants who had settled in Netanya, more than 5,000 were musicians who were so proud of their art that they refused the retraining being offered by the Israeli government. These talented people preferred playing on the streets of the city for coins thrown into their music cases to giving up their art.

So, one Shabbat morning, Rabbi Birnbaum announced to his congregation that he expected them, beginning the following Monday, to come to the synagogue (which was in an alley off Netanya's main square, HaAtzmaut), for a one-hour noontime concert offered by Russian olim artists. Birnbaum found an accordionist on the street who brought his daughter, a singer, and they became the first performers.

The She'arim Netanya Monday noontime concerts continue to this day at the She'arim headquarters (formerly Bet Israel synagogue) at 11 HaAtzmaut Square, first floor, Netanya, at the inside passage on the corner of Bank Hapoalim. Admission is NIS 30 including refreshments from 11:00 to 11:45, a reasonable price for such high quality music. 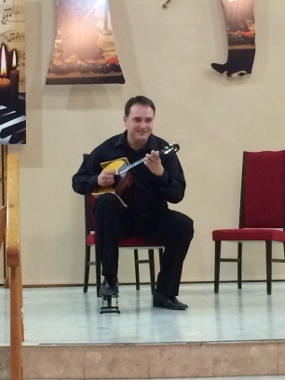 There are also She'arim Gala Shabbat evening concerts held at the current home of Bet Israel at 19 Yehuda Hanassi, Netanya, which is turned into a concert hall for these special occasions that occur every six weeks or so.

The musicians who started with and continue performing for the audiences of She'arim Netanya have gone on to play with most of the orchestras in Israel, including the Rishon LeZion Symphony Orchestra (which is also the Tel Aviv Opera Orchestra), the Israel Philharmonic Orchestra and many others, and many have performed around the world. Often they teach as well, and She'arim has been blessed with performances from several child prodigies who are sure to grace the best music halls during their careers.

But music is not all that She'arim Netanya is about. The second prong of Birnbaum's two-sided approach is spiritual and educational. To that end Birnbaum turned to governmental agencies to develop She'arim into a legally recognized nonprofit organization. At the same time he gathered a group of olim who had been English teachers in Russia and who were ready to enter a program of instruction. He made a pact with them: he would teach them Judaism, Jewish history, Jewish tradition, synagogue skills, Israeli history and geography for six hours a week. For each hour they would get a lesson plan in hand from Birnbaum who was, at that time, in addition to being a rabbi, National Educational Superintendent in Youth Aliyah. When the basic learning of the initial twelve students came to an end, they would begin teaching other Russian olim the very same material but in the Russian language and these teachers would receive a decent salary.

After about four months, as Chanukah approached, Birnbaum decided it was time to begin teaching about the Jewish holidays. Three teachers volunteered for an evening or two. Each and every lecture had about one hundred attendees. As some of these olim became more familiar with Judaism, they began to come to services at Bet Israel. By 1993 there were 700 Russian olim among the other congregants at high holiday services at Bet Israel's new building on Yehuda Hanassi.

Ever practical in his approach, Birnbaum established at She'arim Netanya a daily pre-school and after-school program for children aged 3 to 5 and those aged 6 to 8, to allow single mothers the opportunity to work while their children are being well cared for. Caregivers prepare a home-cooked meal for them every day, which is being set out as concert-goers leave. During the few times that rain keeps the children indoors instead of allowing their usual outdoor activities during the concerts, even the littlest ones sit and listen to the music, some "conducting" with their little arms or swaying to the melodies. They are the most well-behaved children I have seen anywhere outside of those in China. And they clearly love music.

She'arim Netanya offers tutoring for early teenagers and social clubs for teens and adults. In addition there are monthly, highly subsidized outings, "Learn to Love Our Homeland," to which members of the congregation and the public are welcome on a space-available basis. Birnbaum's eldest son, Dr. Aiton Birnbaum, a clinical psychologist who is also a licensed Israeli tour guide, leads the English-speaking group, and a licensed Russian-speaking guide leads the Russian contingent.

After leaving his position at Congregation Bet Israel in 2000, Birnbaum, who is also a college professor, accepted a semester-long teaching assignment at the Moscow University of Humanities. Upon his return to Israel, he was offered the position of National Superintendent in the Institute of Jewish Studies, whose purpose was to prepare new olim for conversion to Judaism, a position he held for five years. To reclaim the Russians to their lost Judaism, She'arim also provides classes for conversion that are accepted by the chief rabbinate of Israel. 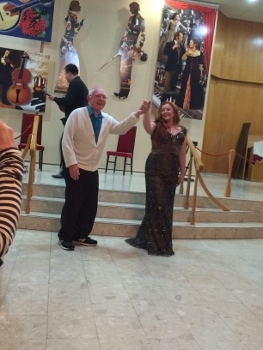 In 1999 the Masorti movement in Israel honored Rabbi Birnbaum for his contribution to world Jewry. In 2000 he received the Yakir Ha'ir Netanya (Distinguished Citizen of Netanya) award. In 2004, on the 100th anniversary of Theodore Herzl's death, he received the Herzl-Nordau Award from the Jewish community in Budapest for services offered to Hungarian Jewry. In 2008 She'arim Netanya was honored to receive the award for Best Service Organization of the Year in Netanya. In 2011 Birnbaum was given a national award in Jerusalem under the auspices of the Ministry of Social Services, in recognition of his work with She'arim Netanya.

From a little boy born in Kosice, Czechoslovakia, who worked on a farm and in a sanatorium as a youth with Aryan I.D. papers when his family fled as Hitler's armies approached, to a teenager who became a Hashomer Hatzair youth group leader and sailed to Palestine on the ill-fated ship, the Exodus, Ervin Birnbaum ended up in New York City, with his nuclear family intact, but having lost grandparents, aunts, uncles and little cousins in the Shoah. There he completed his education at Yeshiva University, including rabbinical school at the Jewish Theological Seminary and a Ph.D. at Columbia University. Due to his experiences during the Shoah, Ervin struggled with doubts about God, but was nonetheless ordained as a rabbi and had a pulpit.

He met Hadassa, who was then known as Helen, in the Pine View Hotel in the Catskills where he was a waiter and she a guest. They married and began raising three sons in the U.S. and eventually made aliyah in 1970, over two decades after Ervin's first attempt on the Exodus.

How he regained his faith in God and, as his book is titled, turned obstacles into stepping-stones, is further detailed in the memoir recalling the incredible life of the amazing Rabbi Ervin Birnbaum…and helps the reader to understand why he has been so inspirational to hundreds of Russian olim in Netanya for over twenty-five years of She'arim.