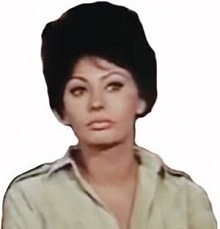 Sophia Loren in the 1966 movie Judith, which was filmed in Israel

The children loved hearing Savta Sarah's stories – even though they couldn't always believe them. They simply could not believe her when she told them that, in her first three months in Israel when she had to borrow money from her aunt to buy food, she used to eat corn on the cob out of dustbins.

"Not thrown away corn," their grandmother hastened to assure them but, in those days, in the mid-1960s, men used to fill dustbins – clean ones, she hoped – with boiling water and cooked the corn in the boiling water.

You chose your corn-cob, sprinkled it with salt and walked along Herzl Street, munching the freshly-cooked corn. It was delicious and, more important, it did not cost very much.

But the story the children loved best was the one that Sarah told about her first job. She had finished the ulpan in mid-February and although she had been promised a job teaching English for the next academic year, she had to find a way to make ends meet between February and September.

Following the suggestion of her aunt, who had originally suggested that she come on aliyah, she went to see Mr Schneider at the pre-academic unit of the Technion.

A kindly, tubby man, he said that he could offer her a job but he warned her that it would not be easy. The would-be students had not had the benefit of a good education, their knowledge of English was low and he could not predict how they would behave. She took the job – there was nothing else - and the rent had to be paid at the end of the following week.

Every day, going to her classroom, a decrepit hut on the Quiet Beach near Haifa's Rambam Hospital, involved a decision: should she take the bus which cost 13 agorot? Or a sherut taxi at 15 agorot? (At this point, the children asked "Why should two agorot make such a difference?)

To her great relief, discipline was not a problem; all the young men – 20 of them – were very anxious to be accepted into the Technion. It also helped that she knew some French and Spanish – especially as she didn't always know the Hebrew to explain the key words in the texts.

And, oddly enough, although she was hardly a year or two older than her students, they did not exploit the situation but felt quite protective towards her.

They told her, for example, that she could buy snacks at a discount at the canteen opposite the ramshackle hut which served as their classroom. "Ramshackle" was hardly the word; there were no windows but huge gaps in the wooden walls through which one could look out at the sea. And the roof had more gaps than roofing.

Sarah sighed with relief at the thought that the winter rains were probably over. "One shower and we'd all be drenched," she thought.

Meanwhile, the lessons proceeded smoothly. The students' vocabulary increased and they caught on to the oddities of English grammar.

Sarah decided that they needed some more practice in writing; writing a short essay would involve using their new-found vocabulary as well as their knowledge of grammar.

So, one day at the beginning of the summer, she asked them to write a couple of paragraphs, no more than 20 lines, on which subject they would like to study at the Technion – and to explain why.

She had told them about this exercise on the previous day so that they had all had time to think about it and, hopefully, she would not be faced with any panic-stricken students chewing the end of their pencils and wondering what to write about.

"It is not an exam," she assured them in what she hoped were encouraging tones. "You may use a dictionary and I'll be in the room so that if you feel stuck, you can always ask me."

She walked slowly along the rows of desks while they were writing, hoping that "her lads" as she thought of them, would be accepted by the Technion. Here, in the hut, they were learning maths and physics as well as English to bring them up to par if they were accepted.

The two scientific subjects were taught by Amnon, an earnest, rather toothy young man, who started most – if not all – of his explanations with the words, "Well, now…"

The students caught on to this foible very early and counted the number of times that Amnon uttered "Well, now." Sarah wondered whether they paid more attention to his way of talking than to what he was trying to teach them, and whether she, Sarah, constantly used any pet phrases which amused them.

It occurred to her that she was very lucky with her first teaching job in Israel; the students were well-behaved and more important, they wanted to learn. The motivation to get a place in the Technion was very strong.

Glad that there were no discipline problems, Sarah looked out of the decrepit classroom down to the Quiet Beach. But the quiet in the hut was suddenly shattered when she opened her mouth and screamed.

All the students looked up to see their teacher trembling like a leaf; her screaming had stopped but she pointed, speechless, towards the sea. One of the students, a tall, good-looking lad called Victor, came up to her and put his arm round her shoulders. "What is it, Miss?" he asked, "Why are you so afraid?"

She said nothing but continued to point to the sea some two hundred yards from their classroom. Then the words came: "A body, there's a dead body on the beach. Look!" All the young men rushed to see – and then they burst out laughing. Victor, the spokesman of the group, looked at her and his face broke into a wide grin.

"Do not be afraid, teacher. It is not a dead body – it is, how you say, a dummy? A mannequin? A sort of doll? They are making a film; it is not a real person."

Later, her aunt gave her more details: the film, Judith, was being shot in Haifa as well as in other locales in Israel. The plot of the film was based on a story by Lawrence Durrell, and the stars were Sophia Loren, Peter Finch and Jack Hawkins.

"And," she added, "They need a few extras for the scene they're shooting tomorrow. If you're free, go to the plaza in front of the Technion at three o'clock. You'll need to wear slacks, grey or beige, and a pair of old shoes or sandals – no platform soles or high heels."

No problem – Sarah wore beige slacks and somewhat scuffed sandals every day. She turned up at the meeting point and was accepted as an extra without question.

She – or, rather, her feet – appeared in the film for approximately three seconds. Which is how Savta Sarah appeared in a film with Sophia Loren.