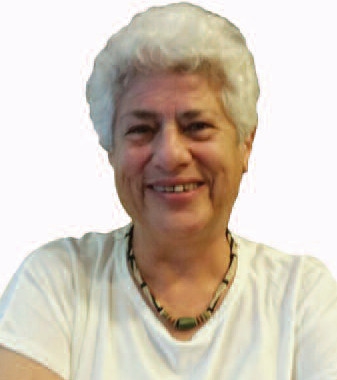 Sandra Apperman was born on July 9th 1943, in Canton, Ohio, and was an only child. Her father was killed while serving near Normandy in France during the Second World War when she was only a year old. She never knew her father.

She attended school in Canton, but loved the times she spent with her beloved uncle Sonny in Ann Arbour in Michigan, where she spent her school holidays.

She graduated from Eastern Michigan University with a BSc in Special Education and minors in Science, the Arts and Psychology.

Her uncle Sonny insisted that Sandra visit Israel. She had just graduated, wasn't interested, and knew very little about Israel and didn't quite understand why. The Six Day War delayed her journey, but she began to listen to news and comments and by the time she arrived in Israel just after the war in June 1967, she soon had her mind and heart opened. It was a life changing experience for her. She married a couple of years later and had three children. Her two step children from her ex-husband's first marriage remained close to her throughout her life.

When Sandra moved to Modiin in 1999, her daughter suggested that she check what activities were available that might interest her. She discovered that a meeting of ESRA, an English speaking organization, was planned and since she always wanted to contribute to others, she went to it. There at the meeting she found new friends, including me. Rona Michelson, recognizing Sandra's background in education, grabbed her to do the children's story hour, and she offered her new home for the next ESRA meeting. The children's story hour was one of the more successful activities, and she also became active in the 48's group for older English speakers in which I was also involved.

Sandra's ready smile and laughter, and her warm personality together with a strong desire to help anyone in need, quickly drew her into our community.

She had many ideas for giving back to society, especially for women's empowerment and self-help. She was a creative, talented and imaginative person with artistic skills and she soon gathered a group of artists, mostly women, into a group who would attend crafts fairs and try to sell their work.

Sandra also volunteered and was a great help for Hadassah projects, such as "Mercaz Kesher" for children of divorced parents and "Café Siah" for women at risk, and was successful in using her life's experiences to ease the difficulties people with problems.

Sandra, the teacher, ran an afternoon center where she provided healthy lunches for the children, time for homework and various other activities. She especially liked to take the children on nature walks, teaching them about their surroundings, and to the archaeological remains on the local Titora Hill. Feeling strongly on the topics of destruction of historic sites and the disappearance of shrubs, plants and flowers, she would explain these dangers to the children, and they learned a lot from her on these and so many other topics. Sandra quickly gained an excellent reputation and her Summer Camp would fill up rapidly.

She worked hard and conscientiously, and saw success from her efforts, and her students appreciated her.

Eventually, when she retired, she left Modiin, and was missed by the children and parents and the wider community, but she would be in Modiin a couple of times a week when she was able to meet her friends and keep up to date. 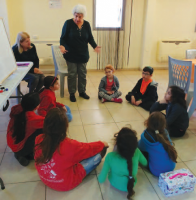 Sandra pictured at a Fun-glish class in Modiin.

A couple of years ago, Sandra's idea for a fun system of learning English (Funglish) was adopted by the ESRA Modiin branch, with the help of Cynthia Barmor, then branch Chair. It was a unique method of effectively teaching English to children and adults and good results were achieved. In addition, the profits went to ESRA Modiin's projects.

Sandra was a special friend and we shared many special occasions together with Cynthia, the late Rachel Max and others. Every get together was a celebration. It is very sad that she is no longer around to lighten our lives.