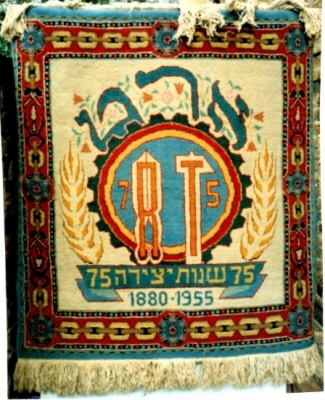 ORT, the Organization for Rehabilitation through Training, is one of the most wonderful of the many wonderful Jewish charities. Founded in St. Petersburg 130 years ago, its mission was to provide poor Jews in the Czar's Pale of the Settlement with the work skills needed to escape poverty and persecution and to become independent productive citizens in the new countries where freedom was to be found. Over the years more than 2 million young people have been taught at ORT schools; today in Israel alone more than 100,000 people owe their skills, trades and vocations to ORT.

Carpet weaving was taught from the 1920s in the ORT craft shops in Eastern Europe. In 1968 the communist authorities forced them to close. The ORT carpets are interesting and important: interesting because their imaging demonstrates Jewish cultural forms adapting to the cultural demands of the host culture, and important because they were made for the noble purpose of endeavoring to restore the impoverished and shattered lives of the weavers.

Rug # 1 (above) , probably made in Sofia in Bulgaria, celebrates 75 years of ORT. Its detailed idealization of industrial tools is typical of Marxist art. See the powerful chains, aided by pliers, screwdrivers and crossed shovels ratcheted on Stars of David, securing the borders. In the central field a hammer and a pair of sheet metal shears – directly echoing the Soviet symbol of the hammer and sickle – form the background to the 'R' and the 'T' of ORT. The 'O' now moulded into a mechanical cog, is flanked by two ears of corn. 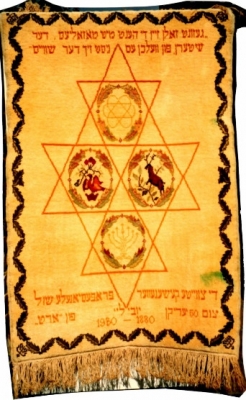 Rug # 2 displays the Hebrew characters at the top which transliterate into Yiddish, "Gezunt, der iteren fun welchen es gist zich der schves", which I translate, rather freely, into "All power to the hoar -handed sons of toil". This carpet and its Yiddish exhortation bring together two very different concepts: one is the timeless Jewish work ethic, the other the failed Marxist promise of all power to the people.

The central design of five Stars of David contains, within its wreath-like form, a contrived Star of David, a bird, a stag and a menorah. At the bottom of the rug the Yiddish script tells us it was made at the ORT Vocational School in Kishinev to commemorate the 50th anniversary of ORT,1880 – 1930. Small menorot support the corners.

Rug #3, with its Cyrillic script in the center, is a marvellous example of polemical socialist realism. In 1948 Bulgaria was still devastated by the Second World War, and the imagery on the rug proclaims its social purpose. From left to right we see factories, a tractor and driver, an engineer controlling a vice above the hemisphere and another at a lathe, more factories and finally a woman working at an ORT sewing machine.

Very rarely in carpet studies do we know anything of the weavers but here we have a photograph of the carpet actually being woven. The process starts with the designer drawing and painting a picture of the carpet on graph paper. Each square represents a knot. This is called a cartoon, and here we see it divided into three parts with each part being placed in order above the section of the loom which is being worked on. Each one of the five weavers has her own section and is tying in the knots in the right color and in the right place, as instructed by the cartoon. The carpet is integrated into a whole because the weavers work together, line by line, laterally across the loom.

The five ladies weaving this carpet in the ORT craft shop in Sofia and the weavers of the other two carpets were all survivors of the camps, who were, through ORT, regaining strength and gaining skills. Their carpets, like most Jewish carpets, are powerful and sometimes painful pictures and insights into Jewish history.