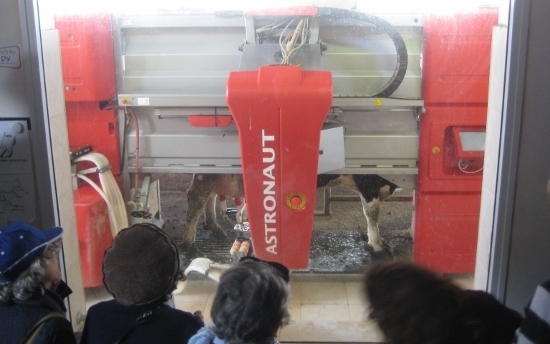 Pull the udder one ... robotic cow milking at the moshav

Avnei Eytan, a religious moshav in the southern Golan Heights, is based on "Torah and Avodah" (religious study and work). The cowshed was begun in 1950 by the grandfather of our guide; he began with two cows milked by hand. As the herd grew, they switched to electric milking. Now, with a herd of 60 cows, they use a $150,000 robot made in Holland. It is only profitable if milking 60 cows - fewer is not worth it, and more requires an additional robot. After a short film about the robotic milking, we had a chance to see the real thing. We were told that we must be quiet as the cows are afraid of noise.
In the viewing room, behind glass right next to the milking robot, I had a front-row seat. And there, right in front of me was the larger-than-cow-sized robot with a cow in it that was being milked while she was eating cereal.
How do they get the cows in the robot? They come by themselves! Why? What's the attraction? For one thing, cows need to be milked (if you nursed your babies you understand this without further explanation; if not, if you've seen a full udder, you know; if you are so urban that you've not even seen that, think of an overly filled balloon just before it pops.) At the head of the milker is a trough that contains a cereal food that the cows like. And, in summer when it's hot, there is a cold shower that sprays the cow while she is being milked. In all, it's a rather pleasant experience for the cows. It takes anywhere from two days to two weeks for cows to learn to go to the milker.
There is a "black list" for the cows; if a cow has not come to the robot for 4 hours, it is noted; after 6 hours she must be checked to ascertain why she has not come to be milked.
The robot works 24 hours per day. Most cows are milked twice per day (on more traditional farms); those at Avnei Eytan come as often as six times per day. If they enjoy the experience of being milked, they come more often. That might explain why Israeli cows produce more milk than cows elsewhere.

An antiseptic spray and rotating brushes clean each udder and then a laser helps the robot find each udder and connect to it. A cow has four stomachs and each udder is attached to one of them. The robot may let go of one udder at a time as each stomach has been milked - they don't all contain the same amount of milk at the same time. If the cow kicks or otherwise moves to indicate discomfort, the robot disconnects. 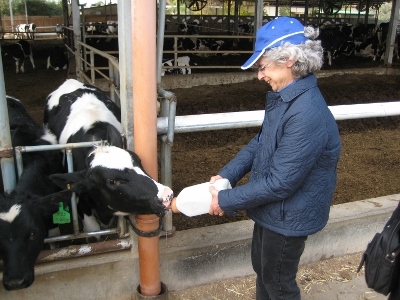 The robot calls when it is not working. On Shabbat, instead of calling the family, the robot calls the designated 'Shabbat goy' .It has the genealogy and necessary data on each cow, how much milk it produced, etc. The robot measures the neck movement, which, if a lot, indicates that the cow wants a baby. Then she is sent out to the field for artificial insemination.
The robot also checks the milk and spills any which contains blood or manifests other problems. The robot cleans itself, and if it senses infection it closes so that no other cows will be infected. The robot records food credit per cow. A cow has 17 seconds to finish eating after milking. If she doesn't finish in time, the food credit goes into a "bank." The cows learn to check the bank to see if they have food credit.
We also learned that pregnant cows give 40 liters of milk per day.
En route to the cowshed, our guide asked who wanted a bottle to feed the calves. Of course I wanted a bottle! As we admired the black and white cows, a medium-sized cow with her head protruding through the fence, stuck her large tongue out and grabbed onto my water bottle. "Boy!! Are cows strong!"

As the group walked ahead to the barn with the calves, there I was feeding a very thirsty cow. When my cow finally let go, we were able to walk on.
The first calf that I saw licked the nipple on my bottle and seemed to be rejecting it, as if she knew that someone had been there first. Eventually she did latch on and finished the water in the bottle.
We were told that mothers and calves are separated for several reasons. Sometimes the calf will feed from another mother, which is bad for her immune system. The robot keeps track of the number of each cow and only her milk is given to her calf for the first few weeks, in order to preserve its immune system.
Any males that are born go for beef. If twins, male and female, are born, the female is born without a womb. We also learned that vets put a plastic-covered magnet into the first stomach (of 4) of each cow to catch any nails that she might inadvertently eat while feeding on hay.

The moshav has a cat that guards the milk. Crazy as it sounds, here is the system: they give 1/4 liter of milk to the cat, who brings friends, and therefore no rats come to spoil the milk. I knew my cat friends would figure in the picture somehow!