Religion and state: Where are we heading? 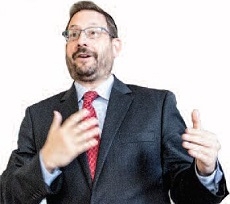 ESRA Netanya opened its lecture series with an outstanding and inspirational address by Rabbi Dov Lipman on Religion and State. He held his audience spellbound with his experiences during the period he was a Member of the 19th Knesset representing Yesh Atid.

He chaired the Knesset Task Force that introduced legislation obligating members of the Haredi Community to enter the IDF or perform National Service.

He also chaired a Knesset Task Force committed to bringing the Haredim into the work force. This, he explained, was the most productive way of decreasing the high proportion of families living under the poverty line within this community.

Rabbi Lipman gained Rabbinical Ordination from Baltimore's Yisrael Rabbinical College whilst, simultaneously, studying for and receiving a Masters' Degree, in education, from the John Hopkins University.

He shared his concern in respect of the hundreds of thousands immigrants who came here from the Former Soviet Union. The requisite for entry was to have a Jewish grandparent which does not in itself make one Jewish.

While these citizens serve in the army, many having given their lives for our security, a high proportion are not Halachically Jewish and, therefore, cannot be married in Israel.

Lipman stated that if we do not find a way to make conversion more accessible to these citizens we will be facing similar problems to that of the Diaspora, namely out-marriage.

Being thoroughly versed in the Halachah he is able to reach out to Haredim encouraging them to join the workforce while still remaining able to continue learning as he himself does on a daily basis.

Lipman spoke of the challenges of the Agunah – the chained woman who is unable to remarry because her husband refuses to give her a Get – (Jewish divorce.)

He shared with his audience the bizarre situation whereby "religious" husbands are prepared to go to jail rather than give their wives a divorce. Prison turns out to be an opportunity to learn and pray in an atmosphere that virtually encourages them to remain in jail rather than unchain their wives.

In spite of the many challenges confronting Israel as a Jewish State, Lipman remains optimistic that ultimately these will be overcome. For those of us privileged to hear him we can but hope that his positive concepts will become reality sooner rather than later.

Ros Ben-Ezra opened this event with warm words of dedication to the late Joan Weisman who had been instrumental in the formation of this annual lecture series.

At the conclusion, Ros expressed our deep appreciation to Rabbi Lipman for his stimulating presentation